China is another world. That is the view of many outsiders when they think about the People’s Republic of China due to the sheer vastness of it. With so much land, masses of inhabitants and many different cultures, intricacies within are often unheard of. As a nation of over 1.379 billion people and 9,596,961 Km² getting your head around the numbers alone is a task enough.

One such intricacy is the emerging abundance of ‘Ghost Towns’; urban areas which resemble a post-apocalyptic movie or post-war zone. And while there are abandoned places on every continent, the sheer scale and increasing amount of these Chinese versions are drawing attention. While they seem to show something sinister or an economic failing, looking into the subject deeper gives another understanding. That they are not ghosts of the past but rather apparitions for the future.

In a region known as Inner Mongolia, covered by deserts there is a region called the Ordos with sprawling urban districts. It is home to many extravagant government projects encouraged by a large discovery of coal mines. One such project is called Kangbashi which was set to become the largest district, originally able to accommodate one million people. It was constructed to become the administrative center of Ordos, taking over from neighbouring district Dongsheng. Being closer to water reservoirs is the main reason why. 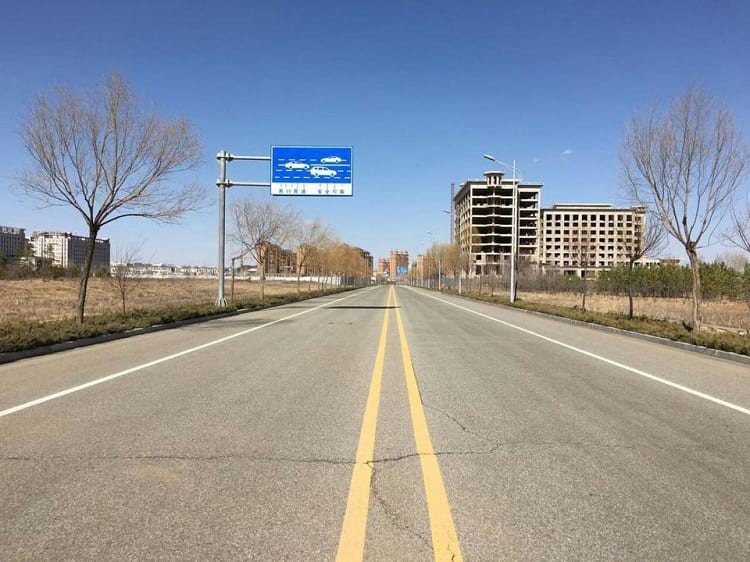 A quiet street of Kangbashi. (© Carla Hajjar / Used With Permission)

Minus the people, Kangbashi looks relatively ordinary in terms of a modern Chinese city. As it is a young urbanization the government has had to create a sense of history as well as artistry. Monuments have been erected to honour the Mongolian ruler Genghis Khan, a controversial figure who was said to unify the Chinese people.

There are also many statues such as horses relating to nomadic Mongolian traditions. Around them are parks, museums, and shopping malls. The curious case ends here, however. While it is exciting to portray the Chinese city as a mysterious haunt like Pripyat – the town near Chernobyl – Kangbashi is no more than government planning. And judging by China’s success in recent years, presumably clever planning at that.

Just as the old saying goes, “Rome wasn’t built in a day”, Xing Su, an official of Ordos answers the situation. And to look at another, the commonly wrongly quoted “Build it and they [he] will come.” from American baseball movie Field of Dreams seems more pertinent. Kangbashi was created only six years ago. Meaning the abandoned aspect at the moment is simply the transition between construction and inhabitation. Only 100,000 people live there currently (if figures are to be believed) but the government is not worried. Simply put, Kangbashi is not an accident, nor a failure. The Ordos is already a prefecture-level city and this new district is a common economic strategy. As it is cheaper to build a new rather than to refurbish, it will become the new administrative center without the need to change or destroy the old one.

Officials report that the population is steadily increasing and will continue to do so with 80-90% of apartments having already been sold. This is again a common place in China for future investment, real estate still booming from the wealth created from coal veins.

There is still a problem at the moment, however. Because there is little population it lacks atmosphere and activities causing people to commute from Dongsheng which is the go-to place for shopping and entertainment.

Residents comment that Kangbashi is a car city, the size deeming it not sensible to walk anywhere, making people order online and live in their apartment complexes after work. This leaves the streets empty and while Kangbashi is beautiful, clean and fresh there is not much to do. An empty mall in Kangbashi. (© Carla Hajjar / Used With Permission)

In effect, the government are looking for ways to improve the city and increase the flow of inhabitants. As the only economic interest is coal, other avenues are necessary to make it a truly functioning metropolis. Car manufacturing plants are being designed and many start-up companies are encouraged too. A national sports stadium has been built which can hold 35,000 spectators as well as a Formula One track in the shape of a horse.

The 2012 Miss World competition was also recently hosted. The ghastly nature of the city is starting to become an idea for adventure tourism with photographers and journalists flocking to the city. They can experience tours that run to the Mausoleum of Genghis Khan, less than 55km away and an area called Xingshawan which has expeditions to the nearby sand dunes. Chinese citizens are also offered many benefits to relocate and become part of the community.

Kangbashi has certainly been debunked as a traditional Ghost Town but still holds many of the said qualities. Despite that, it would appear the future is bright here and instead other, older districts such as Dongsheng have the greater danger of becoming abandoned. Alas how long until Kangbashi becomes the next Dongsheng.

Enjoyed this article? Also, check out “Replica Constructions of World-Famous Cities and Towns in China: Tianducheng, Thames Town, and Hallstatt“.