To understand what a Zebroid is, it is important to have knowledge of Equines. A specific genus of mammals of the family Equidae is referred to as Equus or the Equines. This family comprises of seven different species that include horses, donkeys and zebras. Consequently, a Zebroid is an offspring that results from a cross of a zebra with an equine. There are several types of Zebroids, which include Zonkey and Zorse.

Hybrid names are given as an amalgamation of the sire’s name with that of the dam. A Zonkey is the result of the cross-breeding of a zebra with a donkey. The characteristics of this animal are more akin to that of a donkey than a zebra. A Zorse, on the other hand, is an offspring of a zebra stallion with a horse mare. These hybrids also have different names based on the gender of their parents. They are usually herbivorous animals just like the other Equines. 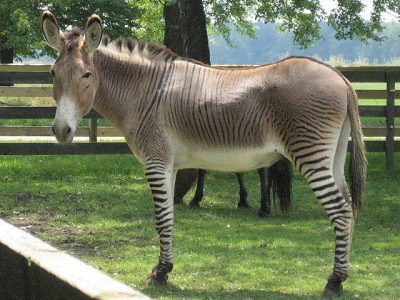 Zonkey, a hybrid of a zebra father (sire) and a donkey mother. (Ruth Boraggina / Flickr)

A typical characteristic of Zebroids is that their appearance tilts more towards that of an equine rather than the zebra, apart from adopting the stripes. These stripes are generally confined to some parts of the body such as legs or neck. Zonkeys usually tend to have a dorsal stripe and a ventral stripe. They are generally of a similar size to the animals they are bred from- the donkey and zebra. Their colours through the legs and belly usually range between tan, brown, and grey with a lighter underside, making the stripes stand out further. A black mane, large head and ears give the Zonkey a donkey-like appearance.

Although the animals look strikingly similar, the behavioural characteristics of the Zonkey and donkey are not so much so. Donkeys have been domesticated for years by humans, but zebras are more on the wild side. Surprisingly, Zonkeys usually take on the aggression of their zebra parent. Zonkeys, also, are gifted with tremendous strength and stamina. The donkey’s stamina with the zebra’s strength and speed comes to a good combination in their offspring. 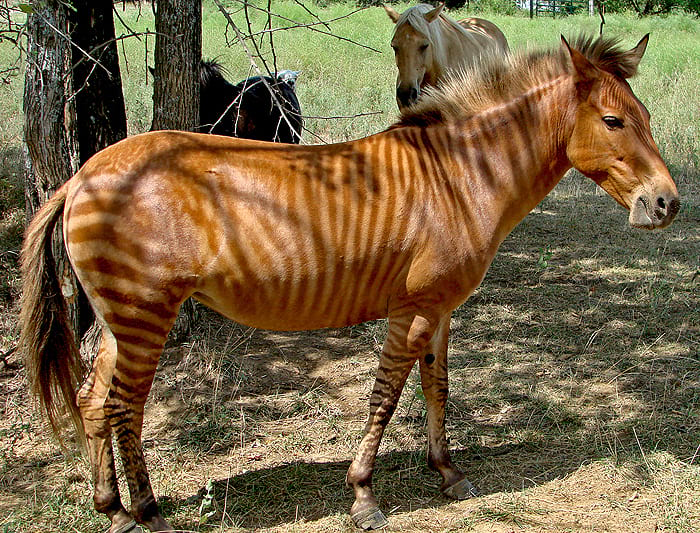 Zorse, the offspring of a zebra stallion and a horse mare. (Kumana @ Wild Equines / Flickr)

An offspring of a horse with zebra ancestry is known as a Zorse. The offspring is born with some very characteristically distinct features. As is typical of Zebroids, the offspring tends to be more like the equine rather than a zebra. Consequently, a Zorse is more horse-like when it comes to their shape, size, and colour. Zebra stripes are prominent in their legs, neck and head. Zorses tend to have a short and coarse coat of fur, with colours that range between tan, brown and black. A dark mane and tail, a large head with a long muzzle, pricked up ears, and large dark eyes with long eyelashes add to the graceful appearance of the Zorse.

Unlike the Zonkey, Zorses are much more sociable animals, reflective of its parentage. Horses and zebras tend to roam the wild in herds of at least two. They are strong and muscular animals with very short flight response times. Both Horses and Zebras are known to have very good night vision, inherited by the Zorse. In addition to that, they also have a 360-degree range of vision. However, they are encumbered by two blind spots- one is at the tip of their nose, and one immediately behind them. Nonetheless, they have a keen sense of sound and smell. They are usually used as trekking animals, which transport goods and people up the mountains.

Through the stripes of time

In 1815, Lord Morton mated an Equus quagga stallion to a chestnut Arabian mare. This provoked interests amongst geneticists, and research on this kind of cross-breeding began. Charles Darwin left behind four coloured drawings of Zebroids and wrote:

“In Lord Morton’s famous hybrid from a chestnut mare and male quagga, the hybrid, and even the pure offspring subsequently produced from the mare by a black Arabian sire, were much more plainly barred across the legs than is even the pure quagga.”

In his book The Variation of Animals and Plants under Domestication, Darwin delineated a hybrid ass-zebra specimen.

In the 21st century, Zebroid breeding is a fairly common activity. This is mainly done as a supply for riding and draft animals. Zorses are bred in Africa and used when climbing up Mount Kenya. They have excellent resistance to diseases. The first Zorse that ever came to be, according to reports, was in 2001 in England, after a zebra was left in a field with a Shetland pony. The name given to this offspring was Zetland.

Unfortunately, Zebroids are also bred in bulk as attractions for the entertainment industry- whether it is in circuses, cinema, or kept as a spectacle in a zoo. The animals are often exploited for their ‘exotic’ value and are kept in inhumane conditions.

Enjoyed this article? Also, check out “Assateague Island and its Feral Horses“.