Development of the Eugenics Movement in the United States 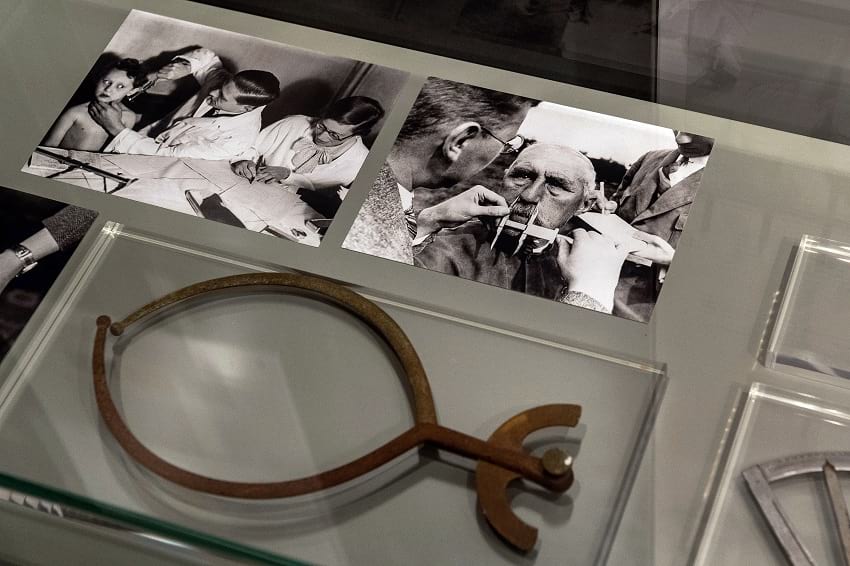 A tool to measure the skull. (Ilya Varlamov / Wikimedia Commons)

Eugenics is about preserving and improving the genetic stock of dominant groups of human beings. It has played a significant role in the history of the United States, causing people to be ill-treated, ostracized, sterilized, and even put to death. The set of beliefs that gave rise to eugenics are still prevalent, although they are now known by other names to give them a more socially acceptable and politically correct veneer.

The origin of eugenics

The idea of eugenics came to the USA from the UK and Europe. 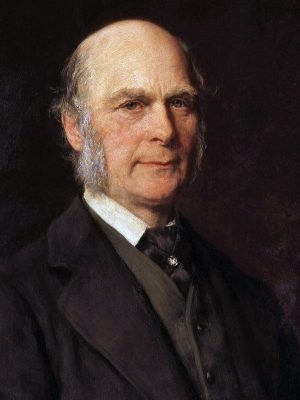 In the 19th century, Charles Darwin’s theory of evolution caused a huge stir around the world. Influenced by this theory, the geneticist Sir Francis Galton—who was Darwin’s cousin—began to consider the Darwinian concept of ‘survival of the fittest’ in the context of human beings. He studied the British upper classes and surmised that they retained their high social positions due to their superior genetic makeup.

The proponents of such selective breeding had the Anglo-Saxon, Nordic, and Germanic people as their ideal of genetically superior humans. According to them, only such people had the right to breed and multiply and inherit the Earth.

Eugenics movement in the United States

The US American eugenics movement developed from Sir Francis Galton’s notions of biological determination, and it received wide support from the US government, the US corporations, the US academics, and the US public. A health certificate issued by Kansas state board of health, certifying that the family has passed the fitter families examination and is entitled to be classified in A grade. December 18, 1920. (Chronicling America: Historic American Newspapers. Lib. of Congress)

The Carnegie Institution, the Rockefeller Foundation, the Harriman railroad fortune, and other well-known corporate foundations were at the forefront of supporting the eugenics movement. They funded research and organizations concerned with eugenics.

The Immigration Restriction League was established in 1884 with the aim of barring inferior races from immigrating to the United States and threatening the superior Anglo-Saxon stock. They wanted to establish a literacy test to determine the intelligence levels of potential immigrants, but US Presidents vetoed such literacy immigration bills in 1898, 1913, and 1915. In 1917, however, the US Congress overruled President Wilson’s veto on the bill. 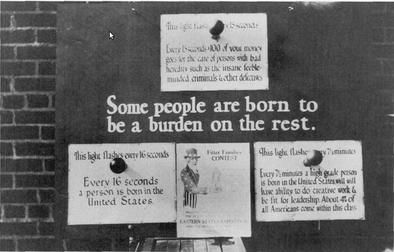 The American Breeder’s Association was established under the direction of the biologist Charles B. Davenport in 1906. Their mission stated that they intended to investigate human heredity traits and stress on promoting superior blood and informing the public about the social menace of inferior blood. The inventor Alexander Graham Bell, Stanford president David Starr Jordan, and the botanist Luther Burbank were some of the notable members of the American Breeder’s Association. The Association paired up with the Immigration Restriction League and established a Committee on Eugenics in 1909.

The same year, with funds provided by J. H. Kellogg, the eugenicists established the Race Betterment Foundation in Battle Creek in Michigan in 1906. Five years later, in 1911, Charles B. Davenport and the American Breeder’s Association established the Eugenics Record Office in Cold Spring Harbour with funds provided by the Harriman railroad fortune and the Carnegie Institution. Along with Davenport, leading US Americans like the psychologist Henry H. Goddard, the conservationist Madison Grant, and the sociologist Harry H. Laughlin were involved with the project.

The Eugenics Record Office set about collecting and recording the family pedigree information of US American citizens. They analyzed the data and drew the conclusion that people from socially and economically backward classes produced unfit specimens. To resolve the social problem of these unfit individuals, the leading intellectuals lobbied to the government for various solutions such as restricting immigration, deporting the unfit, sterilizing the unfit, segregating the unfit, and even exterminating the unfit.

The eugenicists thought such drastic methods were perfectly justifiable for the greater good.

In 1896, Connecticut enacted marriage laws that prohibited epileptics, imbeciles, and feeble-minded people from getting married. The following year, in 1897, Michigan attempted to pass a bill proposing compulsory sterilization for the unfit. However, most of the Michigan legislators refused to vote the bill into law. Eight years later, the state legislators of Pennsylvania passed a sterilization law, but the governor vetoed it.

In 1907, the sterilization bill was first passed in Indiana and became law. Legislators enacted the sterilization legislation next in California and Washington. Other US states soon passed similar laws. These laws were supported by the eugenicists for preventing the unfit from procreating.

It wasn’t until 1924 that the Indiana Supreme Court overturned the sterilization bill. However, in that same year, the US Supreme Court declared that the Virginia Sterilization Act of 1924 was constitutional in the Buck v. Bell case; this was a case concerning the forcible sterilization of a young, mentally slow woman. It was in regard to this case that the jurist Oliver Wendell Holmes infamously remarked that three generations of imbeciles were more than enough. The judgment for Buck V. Bell still stands, and Virginia did away with the compulsory sterilization law only in 1974.

Between 1907 and 1963, over 64000 men and women were forcibly sterilized in the United States. Aside from the mentally defective, many of these belonged to colored, Native American, Asian, and other ethnic groups. Most of these were either not told they were being sterilized or were threatened with the loss of welfare benefits if they didn’t submit to being sterilized. In more recent times, there have been instances of forced sterilization in US prisons.

The Carnegie Institute recommended euthanasia in a report from 1912 for ridding society of its unfit members. They cited the ancient Spartan method of drowning weak children or letting them die of exposure. Some eugenicists like the New York urologist William Robinson suggested gassing people. From the 1930s and onwards, the eugenicists tried to popularize euthanasia by describing it as mercy killing and portraying it in films, magazines, books, and newspapers. The Illinois Homeopathic Medicine Association supported euthanasia and lobbied to make it legal in 1931, and the eugenicists formed the Euthanasia Society of America in 1938.

Various doctors practised euthanasia by medical neglect, by denial of treatment, or by deliberate harm.

In 1915, in Chicago, Dr. Harry Haiselden, who was the chief of the German-American Hospital’s medical staff, decided that a deformed newborn baby boy was not worth saving and refused to perform the operation that might have saved him. At an enquiry held later, Dr. Haiselden insisted he had made the right decision by letting the baby die. He said: “I should have been guilty of a graver crime if I had saved this child’s life. My crime would have been keeping in existence one of nature’s cruellest blunders.”

At the Illinois Institution for the Feebleminded in Lincoln in Illinois, the staff gave the patients tuberculosis-infected milk and around 40% of the patients died as a result.

Unlike sterilization, incarceration, and marriage prohibition, however, the idea of euthanasia did not catch on with the US public.

Far from scandalizing the public, the idea of eugenics picked up speed. From 1908, state fairs around the United States organized Better Baby contests and, from 1920, Fitter Family contests. Here, doctors examined the contestants and judged them according to standardized physical and intelligence measurements. The winners were held up as ideal examples of the human race.

The Immigration Act passed in 1924, mostly due to the efforts of the eugenicists who were determined to keep out the inferior stock from eastern and southern Europe, China, and Japan. Eugenics also became part of the curriculum in the leading colleges in the United States. There were around 376 courses on eugenics by 1928.

There were very few critics, like the Mendelian scientist Thomas Hunt Morgan, but their criticism was mostly directed towards the methodology followed by the eugenicists rather than the idea of eugenics itself. Fortune magazine conducted a poll in 1937 and discovered that two-thirds of the respondents thought it was okay to sterilize mentally defective people and 63% agreed with the sterilization of criminals. Only about 15% disagreed with these measures.

In modern times, eugenics has reinvented itself. Since it is no longer acceptable to talk about improving the human race, the focus is now on saving the planet by conserving environmental resources and employing various population control methods.

Enjoyed this article? Also, check out “Ugly Law: When the US Banned Unsightly Individuals from Coming Out in Public“. Recommended Read:
War Against the Weak: Eugenics and America’s Campaign to Create a Master Race | By Edwin Black

Previous Article
The Great Fire of London: The Blaze That Destroyed 80% of England’s Capital
Next Article
The Disappearance of Michael Rockefeller: One of the Most Enduring Unsolved Modern Mysteries