Duga Radar: Unravelling of the Mystery Behind the Soviet Woodpecker The mystery shrouding the Duga Radar, nicknamed Woodpecker, is slowly getting unravelled. Thirty-two years after the world’s worst nuclear disaster at Chernobyl in the former USSR, the Ukrainians are permitting visitors to the facility. The Soviet Union gave the radar system the code 5Н32-West. The Duga appears like an iron curtain in the middle of a forest. Similar to a network of massive radar antennas, it stands tall inside the off-limits military zone in Ukraine.

Duga means arc in Russian. The radar was part of USSR’s anti-missile and anti-space defense system. Its main purpose was to allow the Soviets to detect any ballistic missile attacks from the NATO members, including the Americans. The Soviets could detect a ballistic missile movement within three minutes of its launch.

The over-the-horizon (OTH) radar system that was used as a part of the Soviet missile defense early-warning radar network measured 150 meters (492 feet) high and 700 meters in length. Hidden in the forests near Chernobyl, it was abandoned after the nuclear disaster on April 26, 1986, that sent a wave of radiation across Europe. 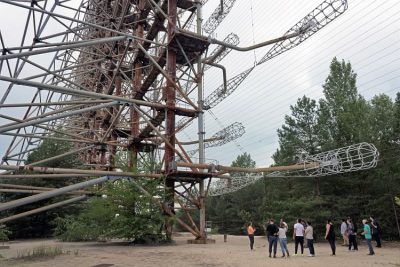 The construction of Duga radar began in 1972 and it became operational in 1976. That was the time when tensions were high between the Soviets and the NATO allies due to heightened Cold War conditions.

During such times, scientists in the USSR were trying to find ways to lessen threats of long-range missiles. They came up with the idea of constructing a massive over-the-horizon-radar with the intention of bouncing signals off the ionosphere and gaze towards North America.

Duga radar, also known as Chernobyl-2, was given a fake identity. Soviet maps marked the facility as a camp for children. A bizarre bus stop erected on the road to the facility showcased a bear mascot from the 1980 Moscow Summer Olympics.

According to legend, Ukrainian tour officials are said to have told the first set of visitors, who were granted access to Chernobyl in 2013, that Duga was an unfinished hotel.

When Duga radar became operational in 1976, it detected the exhaust flames of missiles that were launched. It could do this with the help of short radio waves that were capable of traveling over 3,000 km with the help of a technique called ‘over-the-horizon’ radiolocation.

In 1976, the world first heard these waves in the form of creepy and repetitive pulses that came out of the Chernobyl-2 transmitters, located 60 km from the Duga radar in Lubech-1 town. The town is now abandoned inside the Chernobyl Exclusion Zone. Interestingly, the Duga radar was just a signal receiver.

The radar systems were very powerful. Sometimes coming over 10 MW, they appeared without warning with a sharp and repetitive tapping noise in the range of 10 Hz. The short wave listeners, therefore, nicknamed it as the Russian Woodpecker.

The repetitive frequency hops caused disruptions to legitimate broadcasts like oceanic commercial aviation communications, amateur radio operations, and utility transmissions. There were thousands of complaints worldwide as the signal was causing a nuisance to receivers.

The amateur radio operators started filtering out the interference with ‘Woodpecker Blankers’ by making minor changes in the circuit designs. This led NATO’s military intelligence to name Duga radar as the Steel Yard.

Pavlo Fedykovych of CNN writes in his article that the radar facility located within the peaceful untouched forest near Kiev, Ukraine’s capital, is a closely guarded Cold War secret that is mysterious and sinister in nature.

For decades, the Duga facility continuous to pose questions that gives no answers. People still do not understand its real purpose.

During the facility’s peak period, western media made wild speculations and published reports on conspiracy theories. They claimed that the Soviets were trying to control the minds of the allies. They also claimed that these low-frequency “Russian ‘woodpecker’ signals” could destroy human brain cells and or control human behaviour.

In this background, the United States Federal Communications Commission (FCC) held a study in 1988 on the ‘Woodpecker’ signals. FCC’s data analysis indicated that the signals were having an inter-pulse period of 90 ms. The frequency range was 7 to 19 MHz and a bandwidth of 0.02 to 0.8 MHz. The study found that a typical transmission time was 7 minutes.

Following the study, the FCC began publishing guidelines. But surprisingly, the signals became less frequent. By 1989, the signals totally disappeared signaling the end of the Cold War.

On April 26, 1986, there was an explosion at the nuclear facility at Chernobyl. That was the end of the Duga radar facility due to radiation contamination. With this, most of Duga’s top-secret documents were either destroyed or archived in Moscow.

Further, there was chaos after the Soviet Union collapsed and the radar’s fate was sealed off from the public view till now. After the Chernobyl catastrophe, the Soviet Union vanished, but its ghosts are still haunting Ukraine.

Enjoyed this article? Also, check out “Pripyat, Ukraine: The Thriving Soviet Nuclear City That the Chernobyl Disaster Turned into a Ghost Town Overnight“.