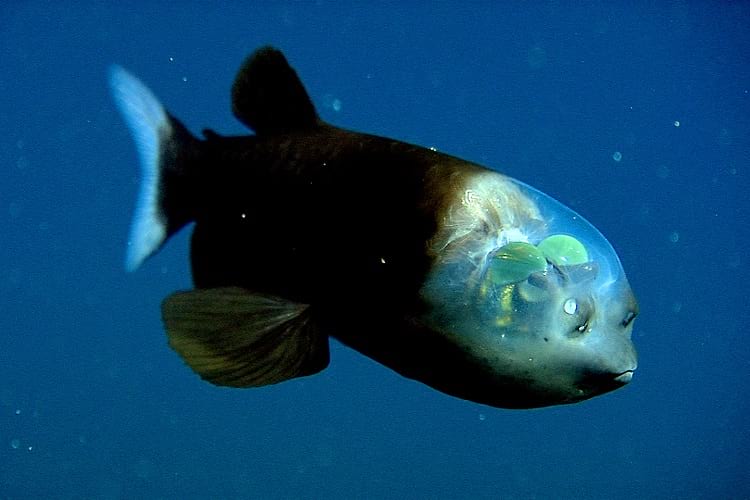 From Goblin Sharks to Blobfish, Sea Cucumbers to Dumbo Octopi (and these names are not made-up) they look like something out of a Sci-Fi film set on a distant planet which is no doubt where many directors got their inspiration from. Another example of this – although with a more natural sounding name – is the Pacific Barreleye Fish. Perhaps a more appropriate name would be its other moniker – the Spook Fish – as this particular class of animal is the epitome of the above characteristics, being described by National Geographic with “…a head like a fighter-plane cockpit…”

In this case more than many others, a picture is worth a thousand words.

“The Barreleye… has extremely light-sensitive eyes that can rotate within a transparent, fluid-filled shield on its head. The fish’s tubular eyes are capped by bright green lenses. The eyes point upward… when the fish is looking for food overhead. They point forward when the fish is feeding. The two spots above the fish’s mouth are… olfactory organs called nares, which are analogous to human nostrils.”

The Barreleye fish was first discovered in 1939 but extremely little was known about the newly-found species due to its natural habitat being so deep below sea level. Barreleyes had to be brought to the surface using nets meaning that their daily rituals could not be observed as the creature would ultimately die on surfacing. Alas, this was the only way because sensitive video cameras which are effective underwater were not as accessible in those times and those that were stayed on more pressing missions. Accessible cameras did not have the ability and strength to handle the intense underwater pressure.

More would be revealed as technology improved, especially in 2008 when teams at the renowned Monterey Bay Aquarium Research Facility were tasked with examining the mysterious fish. MBARI was founded in 1987 by the US former Deputy Secretary of Defense David Packard. As the name suggests, the research facility is situated at Monterey Bay, California, one of the most biologically-diverse stretches of ocean in the world and home to a winding 4,000 meter deep canyon where many of these organisms reside. David Packard outlined the duty of MBARI,

“The mission of MBARI is to achieve and maintain a position as a world center for advanced research and education in ocean science and technology, and to do so through the development of better instruments, systems, and methods for scientific research in the deep waters of the ocean. MBARI emphasizes the peer relationship between engineers and scientists as a basic principle of its operation. All of the activities of MBARI must be characterized by excellence, innovation, and vision.”

The most incredible feature about the fish is in the name – having tubular, barrel-shaped eyes. These were not appreciated when the species was first detected, reportedly because the fragile fluid-filled dome which holds the eyes was destroyed whenever they were brought to the surface. Many even believed that the two eye-shaped holes at the front were eyes (an easy mistake to make) yet they are nares – most similar to nostrils. New information came to light when MBARI was finally able to film the fish underwater, swimming unperturbed in its natural locale.

MBARI used remote cameras to research the fish off the shore of California. The fluid-filled head was observed, as were tubular eyes, able to see within the transparency of the fluid, even rotating to allow the fish to look up. This is vastly important as they can catch the silhouettes of prey under the sun, essential, considering it is almost pitch-black underneath and around. The eyes have binocular vision because of their close proximity (unlike the majority of fish species) and indeed point in the same direction but this actually improves depth perception. This not only includes picking objects out from a distance but even the glowing bioluminescence of minuscule prey. Their eyes are not the only evolutionary wonders; flat fins allow them to stay motionless in the water to conserve energy, retaining their strength for feeding time.

Although having a very small mouth with no teeth they have large stomachs for their size. Spook fish are known to consume a vast amount of the mainly jelly-like substance creatures of the Phylum Cnidarian. They have been observed to maneuver around Siphonophores (a type of Cnidaria characterized for their stinging tentacles) and actually steal food from them. The fluid in their head protects them from any stings.

The importance of studying biodiversity

A quick glance at the Barreleye Fish illustrates how fundamental it is that animals such as these are studied. That is, if no harm, distress or disorder comes to them, it goes without saying. They appear so dissimilar to the majority of other species that it is vastly possible that they hold unique features unbeknown to mankind as well as potential keys to unlock mysteries about our world. The oceans of Earth have become a stark warning to the problems of pollution producing harrowing images about the abject conditions of some areas. They are a sickening reminder of these issues and how wicked a way that humans have distressed the planet.

The little Barreleye is a charming reminder and a much-needed beacon towards the beauty that still remains in the blue, seemingly so deep to be disturbed by the chaos above it. We hope this is the case and that we can clean up our act before the Barreleye and its brethren in the murky depths are affected too. These wonderful creatures may have the ability to help us but only if we help them first.

Here is a video link to the utterly-majestic yet alien-like Pacific Barrel Eye Fish.

Enjoyed this article? Also, check out “Sarcastic Fringehead: Most Quarrelsome Fish That Has a Big Mouth“.

Previous Article
The Hands Resist Him: A Haunted Painting that Spooked the Virtual World for Decades
Next Article
Duga Radar: Unravelling of the Mystery Behind the Soviet Woodpecker