Sarcastic Fringehead: Most Quarrelsome Fish That Has a Big Mouth One of the most quarrelsome fish ever found off the coast of California and Baja California, US, is the foot-long Sarcastic Fringehead. Its scientific term is Neoclinus blanchardi. The fish also falls under the classification of Teleostei: Blenniiformes.

Found mostly in temperate latitudes of the northeast Pacific Ocean, sarcastic fringehead is a small but fascinating fish that belongs to the ‘Family Chaenopsidae’ or simply tube blennies. A blenny is a small tube-like long-bodied scale-less fish found mostly in coral reefs or rocky coastal regions. 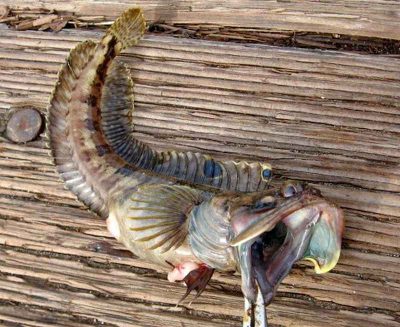 Such an aggressive fish is partly named after researcher Dr Blanchard, who is said to have discovered the species close to San Diego.

Residing at depth of three to 61 metres, the saltwater fish possess some typical family characteristics. It has a long fin on the back and fringe-like cirri (slender tentacle) on its head. The fin on the back extends from the head to the tail fin.

The dorsal spines of the sarcastic fringehead possess two ocelli or eye-shaped spots. The first can be spotted between the first and second spines. The second can be seen between the 5th and 9th spines. The ocelli are blue with yellow rings.

The male sarcastic fringehead displays incredible combative behaviour while defending its territory. It mostly lives in tube-like structures created by other sea animals or a burrow. However, it loves to take shelter in an empty snail or seashell. At times, it has been found to live inside a soda bottle. 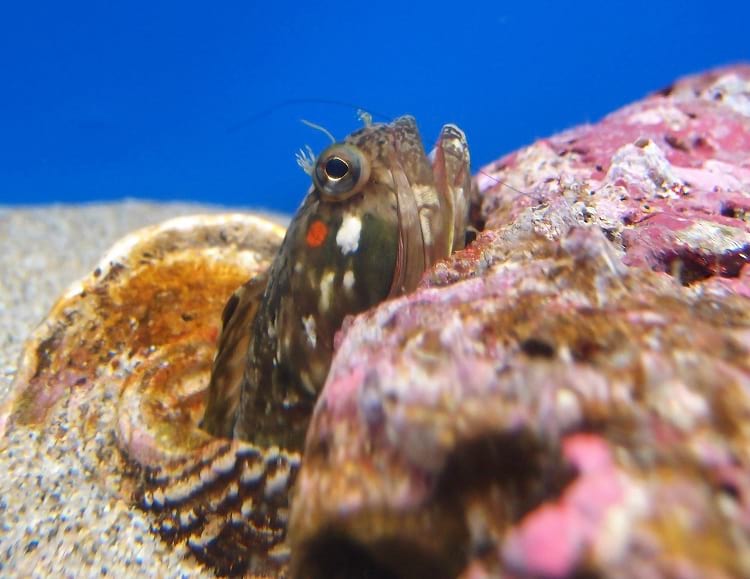 Interestingly, a female sarcastic fringehead lays its eggs in a male’s shelter. They spawn between January and August. In turn, the male protects the eggs from possible predators until they hatch. This kind of sexual selection intensifies male territoriality and the resultant competition.

The eggs that are laid are generally measured 0.9 to 1.5 mm in diameter. Each and every egg contains an oil globule component along with some filaments. These help the eggs to get attached with a nest and also other eggs.

During such aggressive turf wars, a male sarcastic fringehead opens its rather extremely large mouth to scare off the predators or its territorial rivals.

During aggressive combat conditions, a male sarcastic fringehead thrusts its large mouth at its rival’s mouth. At times the mouths of the two rivals touch one another, in what is known as mouth wrestling. Such a strange and aggressive behaviour can also be termed as ‘gaping display’.

Check out the video: https://youtu.be/BjexNXJYblQ

Typically though, the fish with the smaller mouth surrenders. It escapes from the territory in dispute. This way, the rivals actually do not fight.

According to marine biologist Watcharapong Hongjamrassilp‘s thesis, the male sarcastic fringehead uses the colourfulness of its mouth to communicate with its rival.

It shows that this extremely temperamental sarcastic fringehead, which is a fiercely territorial creature, aggressively protects its home from intruders of any seizes including humans. In times of danger, apart from displaying its enormous mouth, the sarcastic fringehead snaps its needle-like teeth and jaws for defence.

If and when an intruder advances forward to take up the challenge, only then does it use effectively its teeth. Strangely, for such a quarrelsome creature, the fish has poor eyesight. It cannot see its foe until it dances cheek-in-cheek with the rival.

Feeds on a mass of tiny floating organisms

During some moments of peace, the sarcastic fringehead rests inside its home.

Scientists believe that the sarcastic fringehead feeds on a mass of tiny floating organisms. During the season of squid spawning, this fish devours huge quantities of squid eggs. However, the oversized mouth of the male fish hampers its ability to feed properly.

Interestingly, this species of fish do not have the ability to eat food through a suction process. As per studies, these omnivores fish consume at least 13.6 times its body weight on an annual basis.

Biologists have observed that the brownish-grey coloured sarcastic fringehead lives on for up to six years.

Previous Article
Padmanabhaswamy Temple: The Richest Temple in the World with Gold Worth $22 Billion in Six Vaults
Next Article
Church of the Dead: Home to the Peculiar Mummies of Provincial Italy