Sea Cucumber: The Modest Marine that Needs to be Protected In nature, there are no superior or inferior life forms. All living creatures are equally important for the environment. A creature that’s meek, easy to hunt, and high on man’s greed list, can go extinct, endangering the host ecosystem. This seems to be happening to some species of sea cucumber. In the Malayan language of Malaysia, Brunei, Singapore, Indonesia and southern Thailand, this marine fish is also known as Trepang.

It’s a cousin of starfish and sea urchins

Sea cucumber is found in the Indo-pacific region of the ocean. That includes parts of Africa, Japan, China, Australia and Mariana Islands. Generally, sea cucumber lives in shallow lagoons, reefs and rubbles, searching food in the sand at the bottom of the ocean. It belongs to a group of marine animals called Echinoderm, and its body size varies from 0.75 inches to 6.5 feet. Starfish and sea urchins are other members of this group.

Typical echinoderms have a radial body symmetry. But the body symmetry of sea cucumber is bilateral, i.e., it has a well defined dorsal and ventral side. Grossly, the body is cucumber-shaped, muscular and flexible. When threatened, it shoots out sticky threads from its body to entangle the enemy. It can mutilate its body and shoot internal organs out through the anus in self-defence. Organs thus wasted in self-defence can regrow, and the organism is once again its normal self.

The tenacity of this marine animal, however, has failed in the face of human greed. The popularity of sea cucumber, as food and drug in the Asian continent, has led to its indiscriminate fishing. Consequently, many species are on the verge of extinction. But alarm bells don’t seem to be ringing. Maybe conservation is focussed more on sharks, whales and other trendy fish. Some varieties of sea cucumber, in the meanwhile, are exposed to a real threat of extinction. 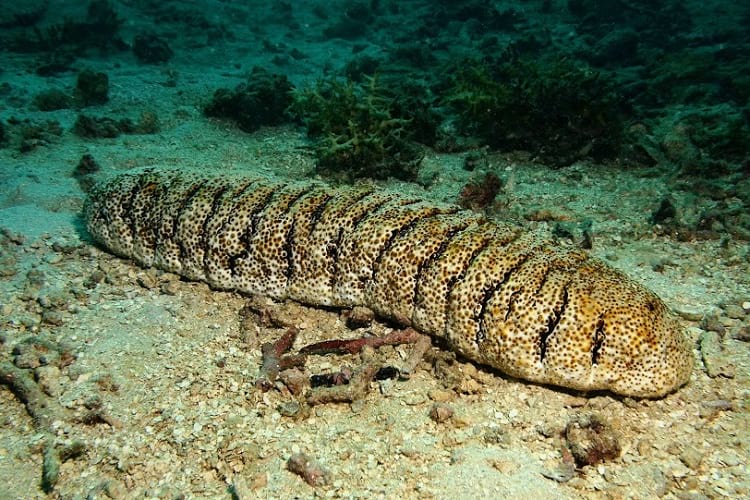 Some species of sea cucumber sells from US$ 10 to US$ 600 per Kg in Hong Kong and China. The cold water variety of it sells for US$ 3,000 per Kg dry matter. Demand for the fish rose with the rising prosperity in China. Consequently, hunt for the sea cucumber intensified in more than 70 countries. Wild Trepang was extensively fished from the seashores of poor countries.

Currently, the International Union for Conservation of Nature (IUCN) deems 7 species of sea cucumbers (from a total of 371 species) as endangered and 9 species are vulnerable. High market demand for sea cucumbers has consistently depleted the population of these hapless creatures. Fishermen were paid well, and in advance, hence they went all out fishing and damaging the marine ecosystem. After tapping the natural habitat of required variety, other virgin waters were searched and exploited to the hilt. Thus, the market demand was met. Marine resource of the economically poor nations was exploited to the detriment of sea cucumber. Hence, the rich countries were advised to help poor nations through means other than poaching on the latter’s wealth of Trepang fish.

Sea cucumbers must survive for the health of marine life

The conservation of the sea cucumber is vital for the health of the marine ecosystem. It scavenges on the sand of the sea floor. Dead organic matter mixed in the sand is used up as food and the ingested sand is expelled through the anus as excreta. The excreta act as food for other sea organisms. The alkalinity of the Trepang excreta reduces pollution-induced acidity of seawater and thereby helps in keeping the marine ecosystem in good shape.

The existential crisis for some species of sea cucumber hasn’t come a day too soon. The countdown began as early as the 17th Century when Trepang fishing became big business in the islands of South East Asia. Sea cucumber was hugely popular in China as food and as an aphrodisiac. Huge market demand from China made the Makkasar town (Indonesia) a nodal centre for trading in the sea cucumbers.

Catching the sea cucumber is easy; no special skill or gadget is required. A feel with bare feet can locate the muscular creature in shallow waters. It is then taken out either by clutching with bare hands or by aimed stabbing in water. Trepangs were easily impaled using a multi-pronged spear. Weights were attached to spear to make it heavy and fall steadily down in the water and stab sea cucumbers. The rising demand of sea cucumber in 1980s and 1990s led to the fishing of its deep sea varieties. This is done with the help of compressor diving. A recent report of FAO reveals that major sea cucumber reservoirs worldwide are depleting at an alarming rate. Not surprising, considering that worldwide demand for it, as food and medicine, recorded a sharp increase in the 20th century.

Hopefully, the 21st century should see some positive developments towards conservation of sea cucumbers. Fishing them prudently would obviously be the first and foremost step in this direction. That alone will ensure an adequate supply of sea cucumber for human food, as well as a healthy environment for plants and animals living in seawater.

Enjoyed this article? Also, check out “Proboscis Monkey: The Rare Borneo Monkey Species with an Unusually Long Nose to Lure Its Females“.

Previous Article
Chand Baori: A Quaint Remnant of the Past
Next Article
Yemen’s Ancient Town of Shibam is Also Known As ‘Chicago of the Desert’