On December 26, 2004, one of the most fatal natural disasters ever recorded in the 21st century, shook the core of our planet. An earthquake took place in the middle of the Indian Ocean which caused numerous tsunamis to hit the coastline of the ocean. The quake measured a powerful 9.3 on the Moment Magnitude Scale and a terrifying IX on the Mercalli intensity scale where XII means total destruction.

It caused a colossal amount of destruction and loss of life. 14 countries including Indonesia, Sri Lanka, India, and Thailand were affected, of which Banda Aceh, a city in Indonesia, was the most affected with more than 200,000 deaths. Smaller tremors were also felt in Bangladesh, Malaysia, Myanmar, and the Maldives. Contrary to what one might expect, not just the areas closest to the earthquake were affected. Tremors of the quake were felt in remote areas as far as Alaska which is over 10,000 km away from the epicentre.

The science behind the events

Seismologists were quite shocked at the unusualness of this earthquake. It took place just three days after a magnitude 8.1 earthquake rocked an uninhabited area between New Zealand and Australia. Earthquakes higher than 7 on a moment magnitude scale are known to occur only once per year. The impact of this earthquake was so intense that it is said to have vibrated our entire planet by as much as 1 cm. The quake also changed the speed of Earth’s rotation, causing a trivial shortage of 2.68 microseconds. The effects of the quake were reportedly felt for more than 4 months after it occurred.

This earthquake is termed as a ‘megathrust’ quake because they occur in subduction zones where one tectonic plate is forced below the other. These quakes are some of the most impactful ones where reaching a minimum of 9.0 on the moment magnitude scale is considered quite normal. This megathrust earthquake took place just below the sea causing the topmost layer of land in the deep sea to slide below the topmost layer of land in the shallow sea. The movement of tectonic plates was mostly vertical, however, some lateral movement of the plates was also detected. Due to this, some coastal areas have moved below sea level after the quake. 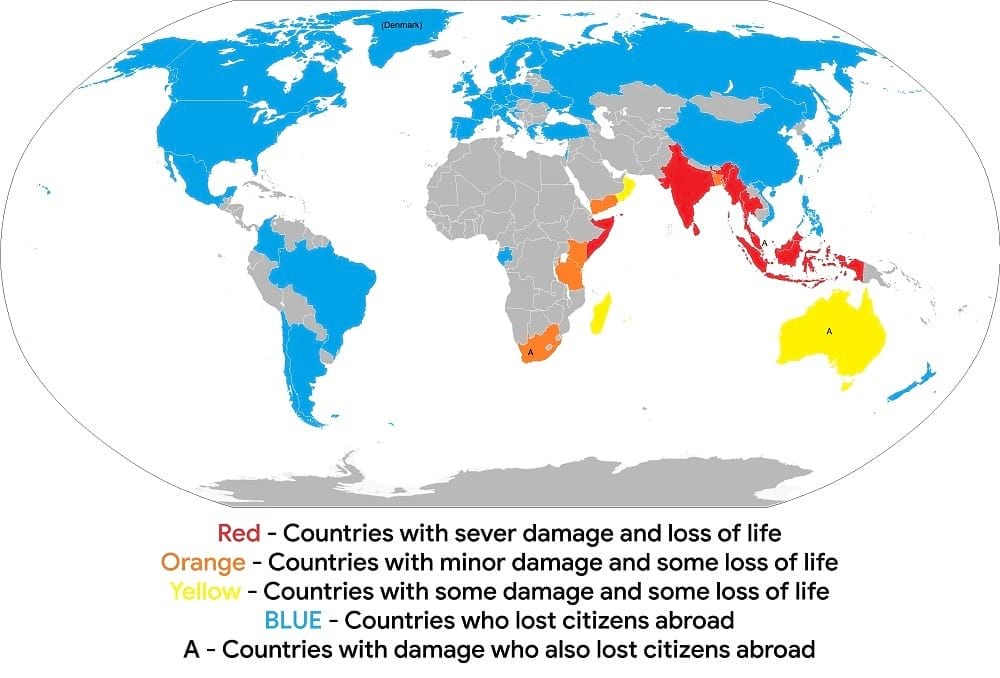 Due to a massive amount of water being displaced during earthquakes, tsunamis are an expected part of the package. In this particular case, it was a shocker. Firstly, tsunamis are extremely rare in the Indian Ocean, despite the fact that earthquakes occur quite frequently in this subduction zone. Secondly, there are no warning systems that exist in the Indian Ocean since tsunamis occur more often in the Ring of Fire region of the Pacific Ocean. Although, it was quite lucky that two NASA satellites that were out on an oceanographic mission just happened to pass over the Indian Ocean and they have radars that help them measure and detect inconsistencies in the height of water waves. And lastly, there was a significant amount of time delay between the earthquake and tsunami. It took about 7 hours to reach the coastlines.

On another note, it is generally quite hard to detect tsunamis in deep water. The waves of a tsunami in deep water are barely noticeable and are just broad, shallow humps of water. These broad, shallow humps travel quite fast between approximately 500-1000  kmph. The behaviour of tsunami waves in shallow water changes; they reach great destructive heights but travel at much slower speeds of 90 kmph. The highest tsunami wave triggered during this event was recorded to be at a gigantic 30 m in shallow water but only 50 cm in deep water. 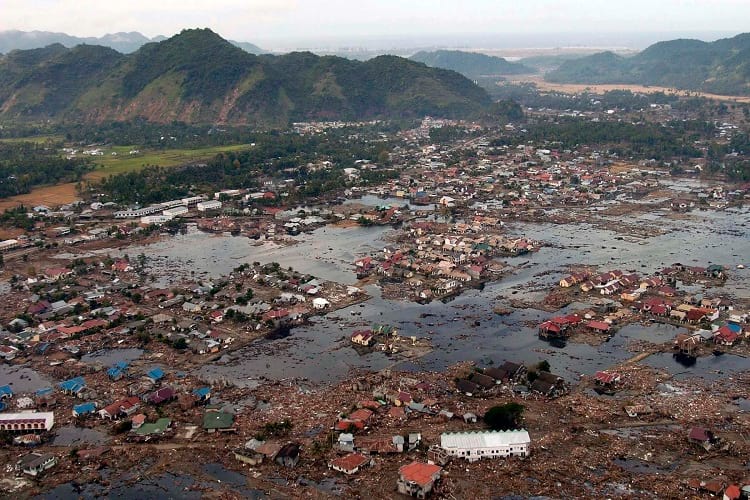 Aerial photo of a village near the coast of Sumatra after the tsunami. (Philip A. McDaniel / U.S. Navy)

This earthquake is listed as one of the deadliest natural disasters to ever take place. This quake triggered the largest humanitarian response with people across the world donating more than USD 14 billion to the affected countries. The only other earthquakes that have been recorded larger than this on the Moment Magnitude Scale were the Alaskan Earthquake in 1964 with a magnitude of 9.2 and the Chilean Earthquake in 1960 with a magnitude of 9.6, although the number of casualties was nowhere close to the one in 2004.

There are accounts of saviours who recognized the events taking place and warned people in coastal areas to evacuate as soon as possible. One such account was of a 10-year-old girl who had learnt about tsunamis just 10 days earlier in school. She alerted her parents, who understood the gravity of the situation and quickly alerted coastal guards.

It is during such events that we truly understand the importance of just being alive. It is certainly frightening to imagine how nature is capable of near-complete destruction in a matter of seconds. In the blink of an eye, the planet lost 230,000 precious human lives on that day.

Enjoyed this article? Also, check out “Krakatoa Volcano: An Earth-Shattering Explosion That Ruptured the Eardrums of Many“.

Previous Article
The Turk: 18th Century Automaton Chess Player was a Forerunner of Computer Age
Next Article
The Haunting Visage of the Belmez Faces: An Anecdote of Lost Souls or Purported Skullduggery?