Goblin Shark: The Alien Shark of the Deep Sea, with a Slingshot Mouth 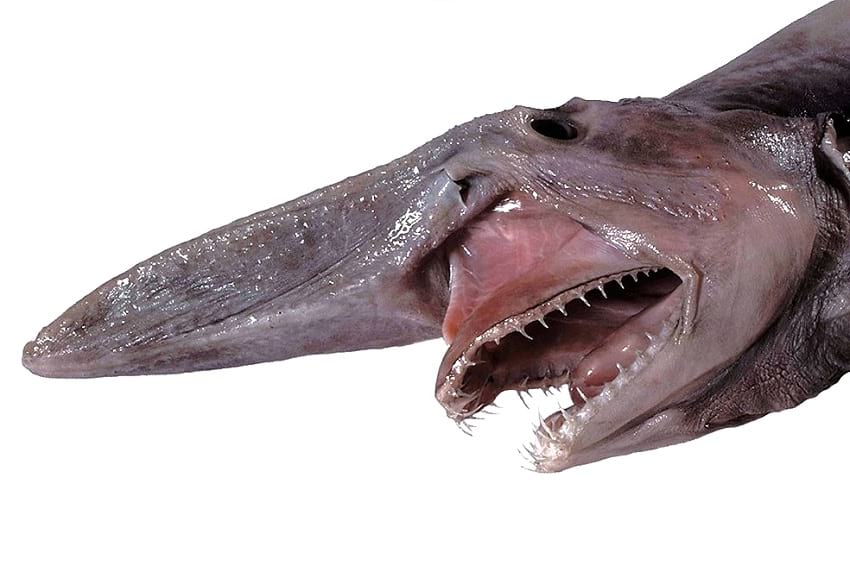 Goblin Shark look like an alien, a character straight out of science fiction. Their dead bodies appear frightening, hence the name ‘goblin’. Goblin sharks pose no real threat to humans. Living at the depths of around 4265 feet (1300 m), they are a rare sight. Knowledge about them is limited to their accidental findings in fishing trawls.

The Goblin shark (Mitsukurina owstoni), is also called “living fossil“ as it ceased to evolve some 70 million years ago. It thrived in deep and dark sea floors, like Mariana Trench, for millions of years. It has been caught, accidentally, from myriad regions of Atlantic, Pacific and Indian oceans. Goblin belongs to the shark family mitsukurinidae, which lived in the sea 125 million years ago. It was first noticed in 1898, off the Japan coast, as a surprise finds in a commercial fish load. In Japan, the fish is also called Mitsukuri shark. 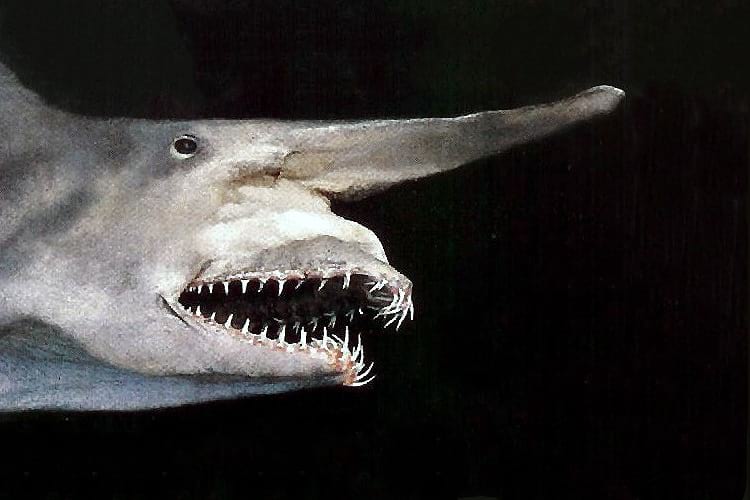 Stretchable jaws are the characteristic feature

The goblin shark has a characteristic protrusible mouth. It can stretch its jaw forward to catch its prey and then retract it back under the snout. This act makes the fish look frightening. A long flat nose/snout covers the jaws. The skin is translucent. Hence the blood vessels are visible from outside and the fish appears pink in colour. They can camouflage with ease, as the red colour appears black in the deep sea. That keeps them safe – hidden from their enemies.

In the year 2008 and 2011, divers working with NHK (Naharkatiya), a Japanese television, captured 2 goblins and made live videos. That showcased their unique capacity to unhinge their jaws and stab them forward to catch its prey (Crustaceans, squids and fishes etc). This ‘slingshot feeding’ includes the fish mouth surging ahead of body line at a terrific speed of 3.1 meters per second. That way, the fish gets an instant thrust of 9.4 percent of her body length. If a human swimmer had this ability, his teeth would move a good 7 inches in front of his face. The protrusible jaws compensates for the hard swim in high-pressured deep waters, to overtake a prey swimming at a faster speed. This also ensures surety of kill in a food scarce zone.

Photo-sensors on snout search out the prey

The knack of shooting the mouth distinguishes goblin from other sharks. The long snout (rostrum) of the shark carries a special sensor which sense electric fields and helps in locating prey at depths where the sunlight can’t reach, hence visibility is poor. The mouth of the fish has rows of thin and long teeth, some visible even when the jaws are closed. Body length can go up to 10.5 feet (3.2 meters). Notably, half of a whole lot of shark species in general, are less than 3 feet long.

Goblin shark reproduces via internal fertilization. Post mating, the female retains fertilized eggs in her body. During the gestation period, the developing lives feed on the unfertilized eggs. After birth, the newborn takes to predation. Their uncertain and unreachable location in deep ocean precludes any possibility of catching them commercially or for research. Knowledge about them is based entirely on their accidental capture while hunting for other varieties of fish.

Nevertheless, the existential importance of the deep-sea sharks can’t be denied. Apart from awe inspiration for human creativity, sharks are key to nature’s food chain, ecotourism, and the study of genomes. Life on the seafloor can reveal how it survived the worst of living circumstances. Such a study can open new doors for the survival and the welfare of the human race.

Click here to view the footage of goblin shark.