The Disappearing Aral Sea and its Abandoned Ships Russia, then, was the undivided Soviet Union. The state government thought rivers which fed the Aral Sea (actually a lake, derived from prehistoric ‘sea’ cut short by tectonic shifts on earth surface) could be syphoned to support agriculture crops in the desert land of Central Asia. The idea worked for a short time, then nosedived, demolishing geography and demography of the area to the point of no return. A typical case of nature’s fury in the face of human misadventure. 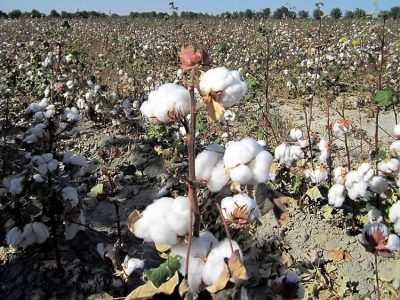 Indeed, in 1960, the government action appeared a benign idea towards the welfare of the Russian people. The Amu Darya and the Syr Darya, the two rivers feeding Aral Sea (lake), were channelled into infertile plains of Kazakhstan, Uzbekistan, and Turkmenistan, to grow agriculture crops.

Come 1980, and Uzbekistan became the largest producer of cotton, but the Aral Sea shrunk in size. Reduced input of water from the feeding rivers wasn’t enough to compensate for the loss of water by evaporation in the arid conditions.

By 2000, Aral Sea was reduced to a minuscule of its 1960 size and split into 2 halves: the small Aral Sea, and the large Aral Sea. By 2001, the 2 parts, connected precariously, got completely detached. Drought conditions depleted the Amu Darya and stopped its flow altogether. In 2014, a big chunk of the large Aral Sea was lost to desert sand. 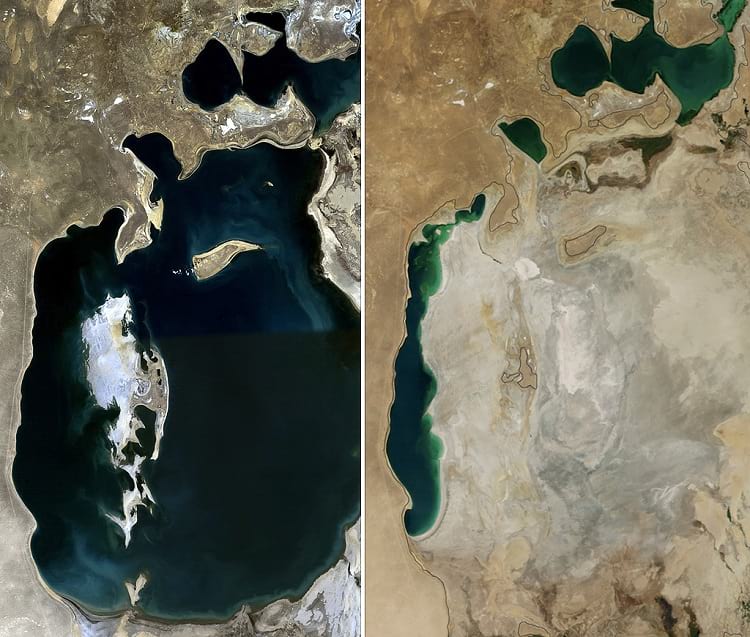 Aral sea in the year 1989 (left) and in the year 2014 (right). (NASA. Collage by Producercunningham / Wikimedia Commons)

The drying Aral Sea changed the climate and the demography unfavourably

Drying of the Aral Sea ruined fishing business, uprooting the stakeholders and forcing them to migrate for new business/employment. The salt content of the lake increased as the surface water evaporated fast. The fertilizers and pesticides used in nearby crops found their way into the lake. Winds lashing the lake bed got laced with salt and chemicals and contaminated the region’s ecosystem. Summers and winters became unusually harsh as a moderating influence of water disappeared with the dying lake. Standing crops required surplus irrigation to flush out harmful chemicals; that jacked up the rate of water depletion in the region.

Waterbody changed to a graveyard of boats

Indeed, drying of the Aral Sea is a typical case of irreversible man-made disaster. It transfigured one of the 4th largest lakes in the world into the desert sand. Most of the heydays working ships now lie thrashed on the lake bed, stripped of their saleable parts. The ship graveyard in Moynaq, Uzbekistan is a poignant reminder of what once used to be a roaring Aral Sea. 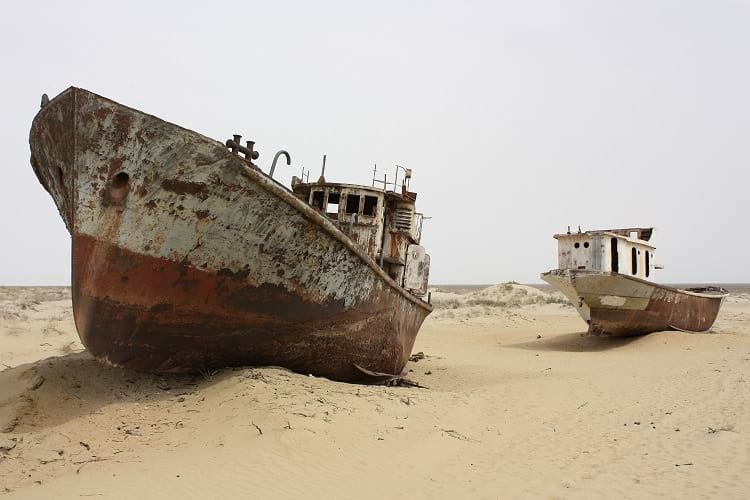 Market-driven economy post disintegration of USSR added to the woes

With the disintegration of Soviet Russia in 1991, subsidies and safety nets of a centralized government came to an end and the emergent independent republics were forced into a market-driven-economy. This added to the hardships which the shrinking Aral Sea had already precipitated. Indeed, the circumstances were propitious for a war-over-water in the Central Asia region.

Damage control was too little and too late

Belatedly, the government of the day rose to the challenge of the vanishing lake. The Republic of Kazakhstan built the Kokaral dam in 2005. This reversed the trend of water depletion and gave a fillip to the fishing business. By 2008, Syr Darya water was well under state control. This resulted in the revival of the small Aral Sea to the extent of 68%. The salinity of the lake too was reduced to half.

The larger Sea (on Uzbekistan side) though, couldn’t be revived. The Republic of Uzbekistan showed more interest in growing cotton than spare water for this part of the lake. The lake got decimated all the more when Lukoil, the Russian oil company, drilled it for oil and gas in 2006.

War on water became a reality

With water resources pushed and shoved, the neighbouring countries were bound to feel hard up. Cotton farmers of Uzbekistan felt threatened by the establishment of the hydroelectric power plant in Kyrgyzstan. This flared up border skirmishes between the two nations. The strategic holding of water by Kyrgyzstan in 2013 choked the water supply in 11 regions of Uzbekistan, and the acrimony between the two republics was an all-time high. Salty winds blew from the vanishing sea all this while, endangering public health no end.

Biological weapons programme was another highlight of the region

A spooky dimension to the eco tragedy is added by the secret experiments in biological warfare. Vozrozhdeniya, an island in the Aral Sea, was the site for the biological weapon’s program of the Soviet Union. It is believed that fully or partially developed biological weapons lie buried there. The island, buffered by a huge body of water and desert sand was an ideal place to culture dangerous microbes like anthrax, typhoid, plague and tularemia and turn them into weapons of mass destruction. The site is now an unrestricted area where anyone can walk in freely.

Messing with nature is no commerce

Enjoyed this article? Also, check out “Euphrates River: A Dying River that Birthed One of the Oldest Civilisations“.

Previous Article
Lockheed Martin F-22 Raptor: A Fifth-Generation Monster in the Sky
Next Article
Monowi, Nebraska: A Village in Boyd County, United States with a Population of One