Well-known as the city that evacuated the day after the Chernobyl Disaster, Pripyat is now a ghost town in northern Ukraine, near the Belarus border. It is a place where nobody lives anymore, and which nature is slowly but surely taking over. One day soon, all its buildings might collapse, and the forest may grow over the remains.

The City of Pripyat, Ukraine

The Soviet government founded Pripyat on 4 February 1970 to house the workers and the scientists that arrived to work at the Chernobyl Nuclear Power Plant some 180 km from Kiev. Pripyat, which got its name from the nearby Pripyat river, was billed as the Soviet Union’s ninth nuclear city or atomograd and, by 1979, it was home to over 49,000 people of 27 nationalities. Demographic–wise, it was a young city, with most of its residents being in their early to mid-twenties. It was a beautiful and vibrant city too, with over a hundred buildings and residences. There were several schools, playgrounds, stores, malls, restaurants, cafes, a cinema, a cultural centre, and a park. The city had stadiums, swimming pools, and gyms. There were factories, a railway station, a bus station, a car park, and a river pier. If some people thought that the city was too close to the nuclear plant, it didn’t spread too much concern or alarm amongst the city folks. At the time, everyone considered the nuclear plant to be perfectly safe, a great feat of Soviet engineering that was using nuclear power to generate electricity only for the good and betterment of mankind. 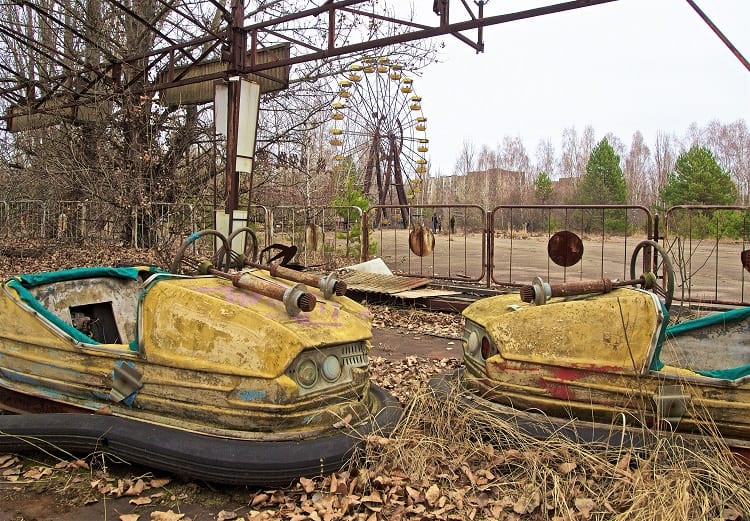 The very curious thing about the Chernobyl explosion is that it occurred not because of a lack of implementation of essential safety methods, but, quite the contrary, on account of a safety test taken too far.

During the midnight shift on 26 April 1986, the Chernobyl plant was shut down for scheduled maintenance and the nuclear plant’s employees used this opportunity to test the grid systems that kept the core of the reactor cool. They wanted to find out how the grid system would fare if the power went out and the emergency cooling system became inoperable. Would they still have enough electricity for the unit to continue working? Would the reactor still receive enough cooling water? To find out, they turned off the cooling system. If the test went as planned, inertia-generated electricity from the plant’s electric turbines was to have worked the cooling water pumps for about 45 seconds before the three backup diesel generators kicked in and gained the power required to operate the main pump.

As we know, the test did not go as planned. There was an appalling lack of communication between the operators conducting this test. The operators who were going off shift did not adequately brief the operators replacing them, possibly expecting deputy chief engineer Anatoli Dyatlov to have a firm grasp on things as was his wont. The new operators, in turn, were too much in awe of him to express the quibbles they experienced regarding the plant’s reaction as they continued with the test. 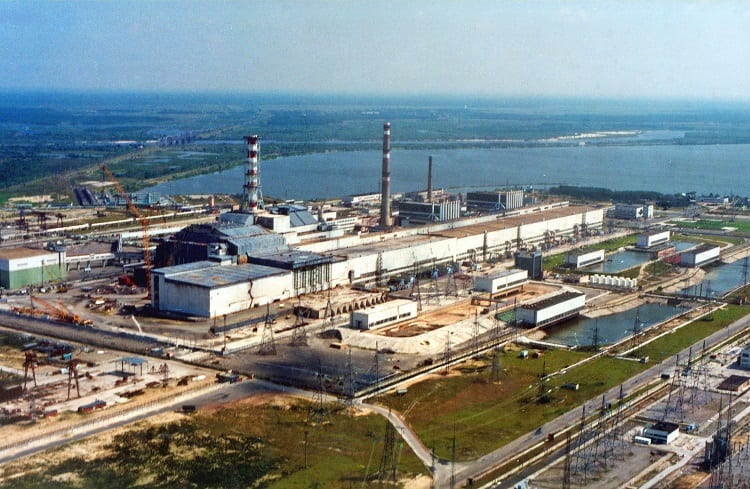 As the turbines slowed, the cooling water pumps slowed the water flow and steam bubbles formed in the core. These caused the RBMK reactor to embark on a positive feedback loop. The steam bubbles prevented the coolant from absorbing neutrons and this increased the reactor’s output, producing more steam and more power. To counteract this and limit the power, the automatic control system began inserting control rods into the reactor core.

Then someone pressed the AZ-5 button to initiate an emergency shutdown of the reactor. There is no record of why they did this, but once done, it fully inserted all control rods into the reactor core. It was the worst thing to happen in that situation. The graphite-tipped control rods were supposed to slow the reaction by inserting neutron-absorbing material, but as the design of the control rods was flawed, they displaced the coolant instead and speeded up the rate of reaction.

This built up towards a power surge that overheated the core and caused the first explosion. A few seconds later, there was a second, more powerful nuclear explosion.

This explosion in the plant’s reactor no. 4 at about 1:23 a.m. sent the roof of the nuclear plant flying into the air and released several hundred tons of toxic material into the surrounding areas.

Effect of the Chernobyl Explosion

According to nuclear experts, the strength of the explosion was over 100 times of that of the bomb that exploded in Hiroshima. The toxic radioactivity spread across the entire vicinity of the plant and, aided by the winds, crossed borders to contaminate areas of Belarus, Ukraine, Russia, and even Poland.

Of course, the public in these regions did not immediately realize what had taken place, since the Soviet government maintained a tight-lipped silence about the disaster in its immediate aftermath and for a quite a long while thereafter, but, in the months and years to follow, many were to die from radiation-related illnesses and many continue to suffer and die. It is common in these areas to hear cases of thyroid cancers and of babies being born with physical deformities, all attributed to the long-term effects of the radiation.

Meanwhile, fire raged at the Chernobyl nuclear power plant and thousands of rescue workers and volunteers attempted in vain to douse it out with water. It took much stronger methods and several months of strenuous efforts before the fires were finally extinguished and, in the process, many brave individuals lost their lives and many others their health.

The evacuation of Pripyat

The morning after the Chernobyl explosion, on 27 April 1986, the residents of Pripyat realized something was very wrong from the smoke that was streaming out into the sky from the direction of the nuclear plant. The authorities then swung into action and ordered an immediate evacuation of the city. People grabbed what they could of their belongings and boarded buses that were waiting to remove them from the compromised city.

As they left, very few imagined that they might never see their homes again, but that’s exactly how things turned out. Instead, they found themselves rehomed six months later in the new city of Slavutych, 30 miles away from the Chernobyl nuclear power plant.

The current status of Pripyat

The Ministry of Emergencies in the Kiev Oblast is responsible for Pripyat and the entire Chernobyl zone and closely monitors the areas with the highest radioactive contaminations. The government continues to do as much as possible to tackle and reduce the contamination levels, including building a special steel shelter over reactor no. 4.

The city remains uninhabited, however, and is likely to remain so for nine centuries still. That is how long it will take to get rid it of its radioactivity. It is safe, however, to pass through its roads and spend a few hours looking around abandoned city and many curiosity-filled folks come on regulated, guided tours, well-equipped with Geiger counters, to the Zone of Exclusion to get a feel of life after a disaster; the Zone of Exclusion, by the way, is the large swath of area around the nuclear power plant that has the misfortune of having the highest amount of radioactive contamination. This isn’t a place where a great many tourists flock to though, mainly because of concerns of radioactive contamination as well as the acute discomfort brought on by the absolute silence of the place. You can never forget that people lived here once and, due to a disaster of immense proportions, now they don’t.

At the same time, it is as if the place remains stuck in a time-wrap. You get an eerie feeling of being back in the old Soviet days and any moment soon, the people might emerge from the various buildings and get on with their daily lives. Perhaps you will hear children laughing as they run home from the Pripyat School, as they play in the once-popular Pripyat Park, or as they splash about in the Pripyat Swimming Pool. Perhaps you will see the much-photographed and never used Ferris Wheel turn in the Pripyat Amusement Park; this Park was on the verge of its inauguration at the time of the disaster. During the city’s evacuation, the residents had to leave all their belongings behind and these remain here still. If, after nine centuries, the city gets new inhabitants, they will find these relics of historical interest. Right now, nature is busy taking over as much of the city as possible. The buildings are decaying with water damage and have moss growing on their walls. Bushes, grasses, and weeds have taken over the sidewalks. 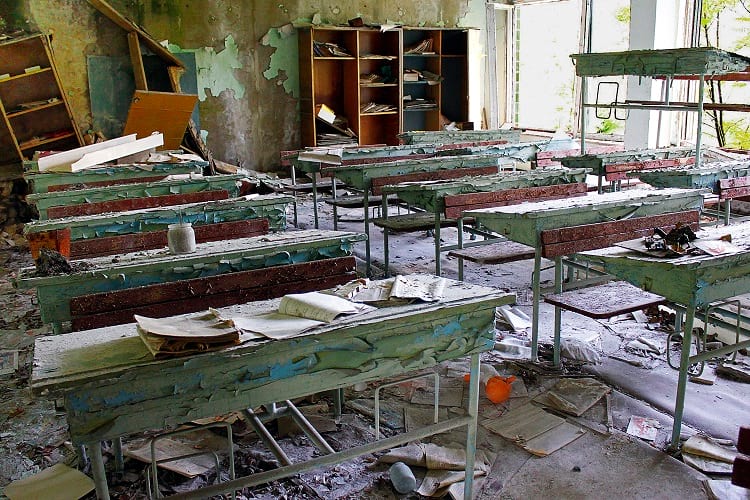 On the outskirts of Chernobyl, the feeling of abandonment grows stronger. The Soviet army’s immense assembly of tanks, trucks, all-terrain vehicles, and helicopters lay rusting in neat lines. As they have been contaminated with the radiation, nobody can ever again use them, not even for scrap metal.

The Resurgence of the Wildlife in Pripyat

Immediately after the nuclear explosion, a large section of a forest of scotch pines died from exposure to the radioactive dust and turned into a rusty orange colour. In its attempts to reduce radiation levels, the Soviet government bulldozed the dead trees and buried their remains. Other trees in the area, however, appear to have escaped similar damage, although the soil still shows very high radiation concentration.

Researchers are still studying the effects of the nuclear explosion on the animals and birds in the Chernobyl region. There are some reports of mutations and smaller-than-normal brains in birds and smaller animals, but larger animals don’t seem to exhibit as much or any side-effects of radiation contaminations. In fact, they seem to be thriving in the absence of humans. Researchers report seeing dogs, wolves, lynxes, deer, bears, bison, moose, wild horses, badgers, weasels, beavers, and wild boars in the area as well as birds like egrets, owls, swans, storks, eagles, kestrels, and harriers.

If you ever wondered what would happen to the earth in the event humans disappeared, this ought to give you an inkling. The planet will do just fine without us.

Enjoyed this article? Also, check out “Varosha: The Abandoned Luxury Retreat in the Mediterranean“.

Special thanks to Jorge Franganillo on Flickr for releasing photos under Creative Commons.