Ladakh Beckons You for a Riveting Tour of Nubra Valley 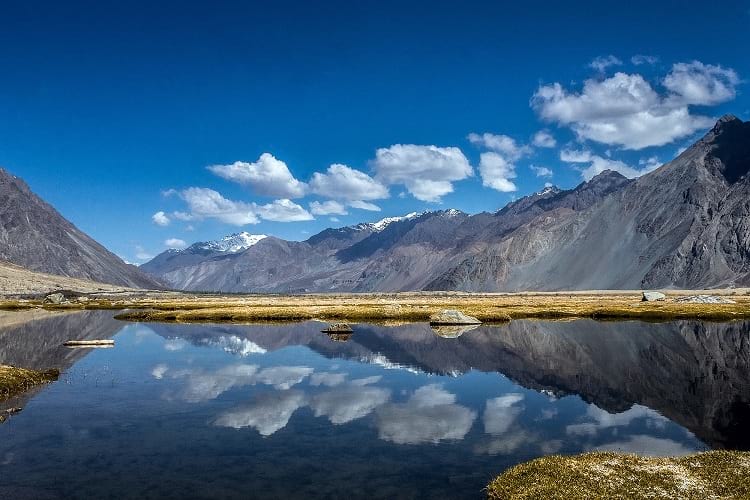 Ladakh is a part of India’s border state of Jammu and Kashmir. It is a mountainous cum desert region lying between two mountain ranges, Kun Lun in the north and Himalayas in the south. Its population is a mix of Tibetan Buddhists (39.7%), Hindus (12.1%) and Muslims (46.4%). A fulsome feel and exciting interface with its Indo Aryan and Tibetan descent, cultural diversity, and natural bounties can be experienced at the Khardung La Pass, Diskit Monastery, Maitreya Buddha Statue, Hundur Monastery, Yarab Tso Lake, Panamik village, and the Samstanling Monastery. A trip to the Nubra Valley situated 10,000 feet above the sea level in the northeast of Ladakh is your passport to visit all these places and much more.

At a distance of 150 Kms north from Leh, Nubra Valley is a tri-armed (Y-shaped) valley, formed by the river Shyok (a tributary of the Indus) and Nubra (also called Siachin River). Surrounded by snow-capped Himalayan range, it looks like a backdrop of the moon in winter. Hence the valley is also referred to as “Broken Moon Land’. Sandwiched between Tibet and Kashmir, Nubra valley is an ideal tourist destination and trekking hotspot. You can reach this beautiful valley through Khardung La pass, which many believe to be the highest motorable road in the world. Others contest this argument and say the highest is Dungri La (Mana Pass) at 18,406 feet, Khardung being just 17,582 feet. The debate revolves around nuances of what constitutes a motorable road, or what accurately defines a motorable road. Khardung La pass is strategically important in the context of highly sensitive Indo-China relations. It is also a gateway to Siachin glacier – the northernmost corner of Ladakh. The glacier was a bone of contention between India and Pakistan in the year 1984. Since then, both the countries have fought intermittently for the territorial claim over this region. Hence, Siachen is also called highest battlefield in the world. As of now, India has control over the entire Siachen glacier. Khalsar and Diskit are the two prime villages located in the Nubra valley. Khalsar is a small village with 98 inhabitants in 22 houses on 114.5-hectare land area. Diskit, situated at 10,310 feet above sea level, is administrative hub of Nubra valley. Maitreya Buddha, also called Jampa Buddha, a 32-meter statue facing Shyok river is located close to Diskit monastery. The statue, an iconic piece of architecture is made of gold donated by the neighbouring monasteries. Local inhabitants too had contributed their bit in the making of this statue. Apart from Buddha statue, ace paintings, drums, the colour-patterned Tibetan silk is also a cynosure of the 350 years’ old Diskit Monastery. Lachung temple, located close to the Diskit Monastery, is dedicated to Tsong-kha-pa, the Tibetan Lama who founded the Yellow-Hat sect of Tibetan Buddhism as a separate from the older Red-Hat sect. The main attraction of this temple is a statue with a yellow coloured Gelugpa hat which represents Tibetan Buddhism associated with His Holiness – the Dalai Lama. The Temple is renowned for its religious beliefs and distinctive architecture.

Yarab Tso Lake is located near the Sumur village and at the entrance of Panamik village, 15 Km from Diskit. Extremely scenic and serene, it is also called the hidden lake, owing to its discreet location. To reach it, one must tread uphill for about 15-20 minutes. The water of the lake is crystal clear. As it is considered holy, visitors are not allowed to swim in it. An oasis in the desert land, Sumur village is famous for 250 years old Ensa Gompa, situated on top of a rock. Panamik village has hot sulphur springs, located 3,183 meters above the sea level. Tourists from all over the world come here to take a dip in hot sulphur water for health reasons.

Another attraction of Sumur village is Samstanling Monastery, founded around 140 years back by Lama Tsultrim. It lies 124 KMs north of Leh and is home to 50 resident monks. The monastery falls on way to Panamik, in a thinly populated area. It is clearly visible from a distance owing to its traditional hues of gold, red, ochre and white. Stairways to the monastery are painted red and flanked with decorations of religious prayer. Fruit-laden berries line the way to the monastery’s entrance. The interiors of the monastery are decked up with murals of Buddha and his teachings. The guesthouse and the residence of the Monastery Head are located on the other side of the monastery. Residence in the monastery is also home to the reincarnation of Bakul Rinpoche, the 7-year-old prodigy, who greets and blesses the devotees.

Alchi Monastery of village Alchi, 64 Kms from Leh, is one of the oldest monasteries of Ladakh. It is famous for wall paintings dating thousands of years back. Thiksey, a 15th-century Monastery, is located at a distance of 19 km from Leh on the bank of river Indus. It belongs to the Yellow sect of Buddhism and has a 15-meter-high Buddha at the entrance of a new temple. Hundar, another village in Nubra Tehsil, is located on the bank of Shayok River and is known for sand dunes and Bactrian camel. The ruins of the King’s palace and other buildings of old times, when Hundar used to be the capital of Nubra kingdom, are now the region’s archaeological assets. Hundar has a hilltop fort called Gula and two Buddhist temples: White Temple (Lhakhang Karpo) and Red Temple (Lakhang Marpo). Bactrian camel of Hundar is the two-humped, truly wild camel that exists on earth. It has the ability to shut close its nostrils to stop sandy air from entering into the lungs. It can survive long periods of travel without food and water, thanks to the fat stored in its humps which are converted to water and energy. On a refill, a thirsty Bactrian can gulp down 30 gallons of water in 13 minutes. Herds of this camel thrive in Gobi deserts of Mongolia and China but are a critically endangered species with their overall number being just about 400. Border village has a stamp of multiculturalism

Turtuk village, close to the line of control (beyond which lies Gilgit-Baltistan, the area under Pakistan control), is a place of scenic beauty.  It became a part of the Indian land only after the 1971 Indo-Pak War. Earlier, it was in Pakistan’s control. Hence, it is also referred to as the village divided by the border. Inhabitants of the village speak in a mix of Persian and old Tibetan language called Balti. Turtuk, in fact, is a Muslim village in a Buddhist land. Mixed ancestry of this village gives a feel of 3 nations: India, Pakistan and China. The locals are extremely friendly for tourists who come here from all over the world. This northernmost Indian village is also the largest apricot producing village of Ladakh. Most local cuisines are prepared with a generous dose of apricots. Walnuts too grow abundantly in this area. Ladakh is a leaf out of ancient, as well as modern, history

Historically, Ladakh had a unique distinction of being the hub of cross border trade. When China closed borders with Tibet and Central Asia routes in 1960, trade routes have closed for international business, except for tourism. Ladakh was the gateway of the Silk Route, the trade route of the ancient world between 130 BCE – 1453 CE. Actually, it was not one route, but multiple – routes, hence the term ‘Silk Routes’ is more appropriate. Marco Polo (1254 – 13243) travelled on these routes and described them in his writings. The name Silk Road (Silk routes) though, was given by German Geographer and Traveler, Ferdinand Von Richthofen in 1877.

Ladakh was divided into two districts in 1979: 1. Leh (the capital of Ladakh as well as the largest town of Ladakh) and 2. Kargil (second largest town of Ladakh). During the 1999 Kargil War, Pakistani troops infiltrated into parts of western Ladakh i.e. Kargil, Drass, Mushkoh, Batalik and Corbata; the key locations on Srinagar-Leh highway.

Ladakh is verily a piece of history, of distant past as well as recent times.

Enjoyed this article? Also, check out “Kumbhalgarh Fort: Not Only China But India Too Has Its Own ‘Great Wall’ Built Centuries Ago“.

Previous Article
Dancing Plague of 1518: When People Nearly Danced to Their Deaths
Next Article
Kola Superdeep Borehole: The Deepest Borehole in the World That the Soviets Drilled in the Kola Peninsula