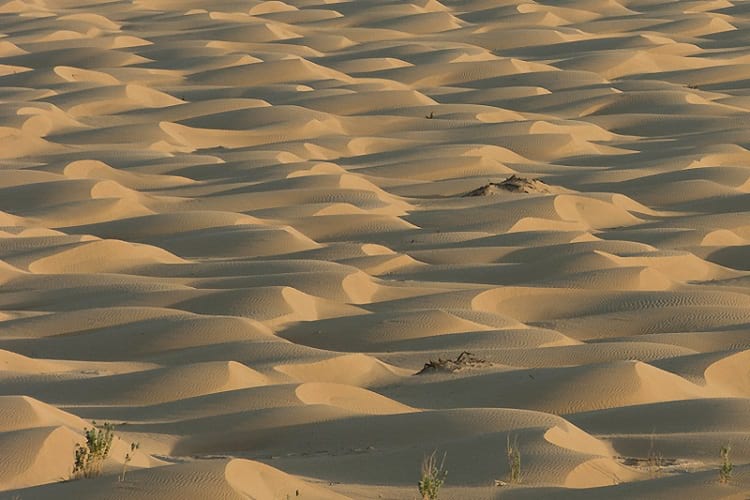 Spanning a quarter of the Arabian Peninsula is the world’s largest sand sea and one of the hottest places on earth – Rub’ al Khali or the Empty Quarter.

It is larger than Belgium, Holland and France combined, without a single permanent habitation or point of potable water. Rub’ al Khali is said to be covering a vast area of about 650,000 square km (approximately) in a structural basin. The Empty Quarter is approximately 1200 km long and 650 km wide. The sands straddle the borders of Saudi Arabia, Oman, Yemen, and the United Arab Emirates. 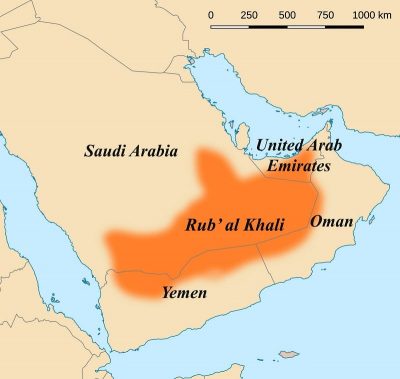 Rub’ al Khali has only been crossed a handful of times and rarely has this land or its people been photographed.

Home to an ancient civilization

Archaeologists over the years believed that ʿĀd, an ancient civilization, described in the Qur’an as “Erum of the pillars” is said to be buried under the desert sands. However, it has not yet been discovered.

The rolling dunes and the expensive Rub’ al Khali desert is perhaps the largest continuous sand desert that ever existed in the world. Precipitation here rarely exceeds 35 millimetres a year and regular temperatures hover around 50 degrees Celsius in the vast desert.

The star-shaped dunes at times reach up to 250 metres in height in some parts of the desert. The dunes are interspersed with hardened flat plains, which are remnants of shallow lakes that could have existed thousands of years ago. They were formed by monsoon-like rains and runoffs. Satellite photo of the desert showing the separation of dunes by white salt flats, known as sabkhas. (Robert Simmon / NASA)

Though being the driest regions in the world, vast petroleum reserves are still present beneath Rub’ al Khali sands. In 1948, the world’s largest conventional oil field, Al-Ghawār, was discovered in the desert’s northeastern part.

Al-Ghawār is roughly located 260 km east of Riyadh and the petroleum field still has tens of billions of barrels of crude oil.

Al-Shaybah is another major oil field and is located southeast near the UAE and Oman. Al-Shaybah still has large reserves of natural gas and is also busy with refinery operations.

Some of the other major sand seas of Saudi Arabia include An Nafud (north), Ad Dahna (east-central) of the Kingdom, and Al Jafurah (east).

The source of the name ‘Rub’ al Khali’ or ‘Ar Rub al Khali’ is not yet known. The name is believed to translate as “Quarter of Emptiness”. But, it is believed to be an old Arabian name that was used in a book of the famous Arabian seafarer Ibn Majid. The book’s name is ‘Al-Fawa’id fii Osool Ilm al-Bihar wa al-Qa’wahid‘ (Benefits in the origins of Marine Science and Bases).

The name ‘Rub’ al Khali’ was used in the book to refer to some places that were at the edge of Ma’rib and Al Jouf. There are also suggestions that the name was given by some European explorers and orientalists after visiting the area.

Formed during the pluvial (glacial) and inter-pluvial (interglacial) periods

Rub’ al Khali is said to have been formed during the pluvial (glacial) and inter-pluvial (interglacial) periods in the Tertiary and Quaternary (Fourth period of Geologic time). Photo by an astronaut of the dunes at Rub’ al Khali also called the “Empty Quarter” near its southeastern margin, in the Sultanate of Oman. (ISS Expedition 27 crew / NASA Earth Observatory)

Other geologists like John Whitney of the United States Geological Survey feel that the Rub’ al Khali dunes perhaps emerged some 25 million years ago.

They also say that Rub’ al Khali perhaps represents a sedimentary basin, which extends between the Al Hagar Mountains in Oman, Zafar (Dhofar) and the highlands of Hadhramaut. From there the desert touches Sarawat Mountains and the Tuwaiq Mountains that lay in the southwest, and north-northwest regions respectively.

Geologists also believe that there could be two major reasons for the dunes in Rub’ al Khali. Reason one could be the continental sand that is transported by the wadis flowing from Jibal al Hagar (Oman), Hadhramaut, Sarawat and Tuwaiq. The second reason could be the marine sands blown from the waters of Arabian Gulf.

Rub’ al Khali or the Empty Quarter could be divided into five sections based on the types of dunes.

These are large and high dunes that host moist sabkha. Some of these dunes can reach heights of 200 m. Most of these dunes are located in the northeastern part of the desert.

These dunes have the shapes of steep pyramids and steep tops. They are also formed individually. These dunes can reach heights of 200 m. They are found in the southern and eastern parts of Rub’ al Khali.

These are high and inter-structured dunes. They are located at the junction of longitudinal dunes, which run in opposite directions. These dunes reach heights of 100 m and can be found in the middle of the harsh desert.

These are semi-flat or wavelike. They include low sandhills like Al Galdah.

These form parallel formation and are located between the southwestern and northeastern parts of the desert. They reach heights of up to 100 m. These dunes are majorly found in the western part of the desert.

Plantlife continues to exist in the Empty Quarter

In spite of such harsh conditions there, plant life continues to exist in the Empty Quarter. In some places, the plants or shrubs are good for grazing too. In some other locations in the desert, plants happen to grow a bit thick in spite of scanty rainfall.

Some of the plants in the desert have local names like Al-Ghadha, Al-Abal, As-Shinan, Al-Haram, Al-Andab, Al- Alqa, and Az- Zahar. Such plants are seasonal but resistant to drought for comparatively long periods of time.

In the past, such vegetation gave refuge to several animal species in the Empty Quarter. Animals like an ostrich, Arabian oryx, and sand tigers were believed to have roamed across the region. Today, however, they are gone due to large-scale hunting and drought.

Intending to protect the desert animals and plants, Saudi Arabia established the National Commission for Wildlife Conservation and Development as a wildlife park. The part is located at ‘Uruq Bani Ma’aridh, which is in the southwestern edge of the desert.

The Empty Quarter is home to several ancient water sources and wells, which are plentiful in the northeastern, eastern, and northern parts of the desert.

Some of the important sources of water include:

1. Artesian wells dug by Aramco and having sulfurous water
2. Gorges containing brackish water in the eastern part of the desert
3. Wells with somewhat potable water

Not an easy task to cross the Empty Quarter

It is not an easy task to enter and cross the Empty Quarter. Very few outsiders managed to do it with the help of experienced tribal guides. Some of the outside explorers were DE Cheeseman in 1923 and Abdullah Philby in 1932. Besides, there was Wilfred Thesiger, also known as Mubarak Bin London in 1945.

Between 1979 and 1982 Saudi Arabia’s Department of Aerial Survey established a Geodetic network that more or less covered most regions of Rub’ al Khali. The production of topographic maps based on aerial photos followed the survey of the entire Empty Quarter. 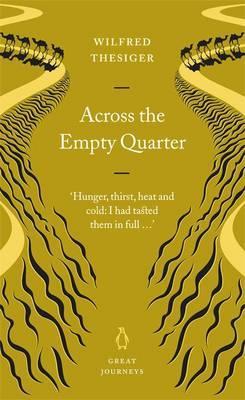 Recommended Read:
Across the Empty Quarter | By Wilfred Thesiger

Previous Article
Tiger Temple: A Clandestine Tiger-Breeding Facility Run by Monks
Next Article
Ivan the Terrible: The First Tsar of Russia and His Reign of Terror