Kola Superdeep Borehole: The Deepest Borehole in the World That the Soviets Drilled in the Kola Peninsula

Have you ever wondered what would happen if you kept digging into the Earth? How far down could you go? Could you dig right to the Earth’s core? What would happen if you did? The United States and the former Soviet Union separately attempted to find out from the 1960s to the 1990s. The result, on the Soviet side, was the Kola Superdeep Borehole that, at 40,230 feet (12,262 meters), remains the deepest artificially-made hole in the world.

The Earth has a rocky crust that goes down to around 50 km from the surface while the Earth’s core is at least 6730 km from the surface. Geologists from both the United States and the Soviet Union were eager to understand the geological composition of this crust and the Earth’s core beyond that, and, as in the case of the Space program, they embarked on a race to be the first to discover the mysteries that lay underneath. 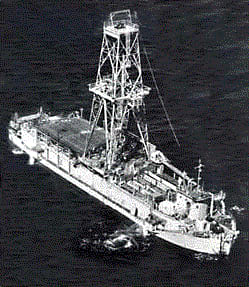 CUSS I drillship used by the US for underwater drilling. (US Gov)

The United States took the lead in 1960 by starting Project Mohole under the sea off the Pacific Coast of Mexico. As compared to the crust on the Earth’s surface, the crust on the seafloor is thinner and the US Americans thought it would be easier to drill down from there. They began by sinking six large buoys underwater to a depth of 200 feet and positioning them into a circle. Then, using a sonar, they moved a Navy barge directly over the buoy circle and fixed an enormous rig in the centre of the circle.

Once the rig was in place, they began digging at 11,700 feet on the sea floor and dug under the crust until they reached a depth of 601 feet. At the point, in 1966, the US Americans ran out of funding and had to give up on the project.

On the Soviet side, they began their drilling project later in 1965, but they had the good fortune of having the project planned at least five years in advance. The Ministry of Geology of the USSR established the Interdepartmental Scientific Council for the Study of the Earth’s Interior and Superdeep Drilling for this specific purpose. Their detailed planning ensured that the project didn’t run out of funds at any time in the course of its duration and that they were able to carry out the drilling in the most feasible area.

The Council spent a long while in surveying various areas until they decided upon the site in the Pechengsky District in the Murmansk Oblast on the Kola Peninsula as the most appropriate one. They then took their time in constructing a proper rig for the drilling and building a protective rig enclosure; this enclosure was 200 feet tall, incidentally. They also prepared the right drilling machinery and invented new devices to facilitate deep drilling.

Regular deep-drilling rigs make use of a rotating shaft drill, but the Soviets perceived that this wouldn’t work as well at the very great depths they expected to go down to. Instead, they came up with a drill in which the shaft remained steady and only the drill bit at its end rotated. The Soviets designed the shaft to allow the pumping of drilling mud down its length and this mud put pressure on the drill bit and made it rotate and drill into the crust.

The Soviets called their borehole the Kola Superdeep Borehole and worked on it until 1994.

The drilling on the Kola Superdeep Borehole began on 24 May 1970. Rather than one borehole, the Kola Superdeep Borehole consisted of one main hole with several others branching off from it. The Soviets were to use two drilling rigs in the course of the project, the Uralmash-4E and the Uralmash-15000. They planned to dig through the Baltic Shield continental crust down to a depth of 49,000 feet.

By 1983, the drillers had dug down to 39,000 feet. They then stopped drilling until 1984 and, in the fallow period, Soviet scientists and politicians visited the site and there was much nationwide publicity about the borehole. Ordinary Soviet citizens followed news about the borehole and were proud that their country had succeeded where the United States had failed.

In 1989, the deepest borehole, SG-3, went down to 40,230 feet. The SG-3, by the way, is only nine inches in diameter. The drillers then, perforce, had to stop drilling as the temperatures at that depth were incredibly high and adversely affected the drilling. By their calculations, the drillers had expected to encounter a 100 °C temperature, but, instead, it turned out to be 180 °C.

This very high temperature rendered the rock at that depth into a porous, permeable, and plastic-like state. This made drilling almost impossible as every time the drillers withdrew the drill bit for replacement, the plasticky rock flowed over and closed the drilled hole. The researchers attempted to get around the heat issue by pumping down ice-cold drilling mud, but that didn’t have the required effect.

With no solution apparent around this problem, the drillers had no other alternative than to stop further drilling. They were still 9,000 feet away from their early stated goal of reaching 49,000 feet.

In the course of the drilling, the Soviets were able to collect an enormous amount of geological data that shed an illuminating light on what we know about the Earth. Geologists had to abandon many previously held theories in face of the new factual data.

Before delving deep into the Earth’s crust, geologists collected necessary information from studies and surveys on the Earth’s surface and by recording seismic activities. From previous data, they noticed that the speed of seismic waves became faster at three to six kilometres below the Earth surface. The geologists assumed that this was on account of a change in the rocky crust, with the upper granite changing into a layer of basalt rock.

They called this presumed rock transition the Conrad discontinuity and discovered that it occurred beneath all the continents. At the Kola Superdeep Borehole, however, the drill failed to encounter it and they found that the granite rock extended down to 12 km and more. The geologists then came to the realization that the rock underwent metamorphic changes from the great heat and pressure at that depth and these changes were what caused the seismic-reflection results they had obtained. In short, the granite rock remained granite but underwent a structural change due to heat and pressure.

Plankton in the Kola Superdeep Borehole

On reaching the depth of six km, to the amazement of the Soviet geologists, they found microscopic fossils of planktons in the samples they extracted. There were 24 plankton species and test results pointed out that the fossils were at least two billion years old. Nitrogen and oxygen layers encased the fossils. It was incredible that they survived unscathed in the tremendous heat at that depth.

Another incredible find at the Kola Superdeep Borehole was the discovering of water at the depth of 7 km. It seeped in the cracks of the granite rock. Where had the water come from though? The geologists surmised that mineral interaction probably produced it and that it remained there underground since it could not pass through the impermeable rock surface overhead.

The geologists also found hydrogen gas in the mud that they extracted from the borehole.

End of the Kola Superdeep Borehole

After drilling halted in 1989, the workers left and never returned to resume the work. The Soviet Union disintegrated in 1995, but the authorities took until 2005 to officially announce the scrapping of the project. In 2008, they dismantled the rig and buildings and fitted a steel cap over SG-3. 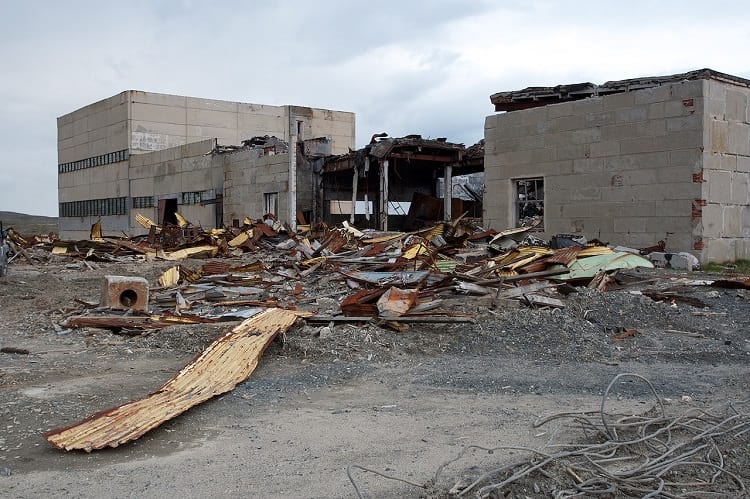 If you want to see samples extracted from the Kola Superdeep Borehole, you can see them in Zapolyarny, a town located some 10 km from the site and known for its nickel mines. It is in the Pechengsky District of Murmansk Oblast, Russia. You can also visit the site of the borehole itself and see the building ruins.

Enjoyed this article? Also, check out “Bingham Canyon Mine: The Largest Copper Producing Mine in the United States“.