Located in Deshnoke, Rajasthan, around 30 km from the city Bikaner, is the extraordinary Shri Manshapurna Temple, commonly known as the Karni Mata Temple. This temple is also famously known as the ‘Temple of Rats’. It is a Hindu temple dedicated to the Hindu goddess Karni Mata who is an incarnation of the Goddess Durga. The Karni Mata Temple houses thousands of rats, and pilgrims from all over the country visit Deshnoke to worship these rodents with exceptionally long tails. These ‘holy’ rats are also known as ‘kabbas’, and aside from pilgrims, this temple also attracts many curious tourists from all over the world.

The legend of Karni Mata

During the 14th century Karni Mata, who was a part of the indigenous Charin clan, lived and performed many miracles during her lifetime. It is believed that she lived till she was 150 years old, and locals believe after her death she metamorphosed into a rat. According to legend, Laxman, the son of Karni Mata, drowned while he was trying to drink water from the Kapil Sarovar in Kolayat Tehsil. Karni Mata implored Yama, the God of Death to bring him back to life. He refused initially, but later relented and said that Karni Mata, being an incarnation of Durga, could restore his life. She did this and also decreed that members of her family would not die. Instead, their dynasty would be reincarnated as rats. Thus, the entire Charin clan believes that when they die, they will be reborn as rats.

The rats inhabiting the Karni Mata temple are revered by the followers of Charin and are believed to be the descendants of Karni Mata and her dynasty. High honour and good karma is said to be bestowed upon those who eat the food that has been gnawed at by the holy rats. If any of the rats are killed, they are immediately replaced by another one made up of solid silver or solid gold. 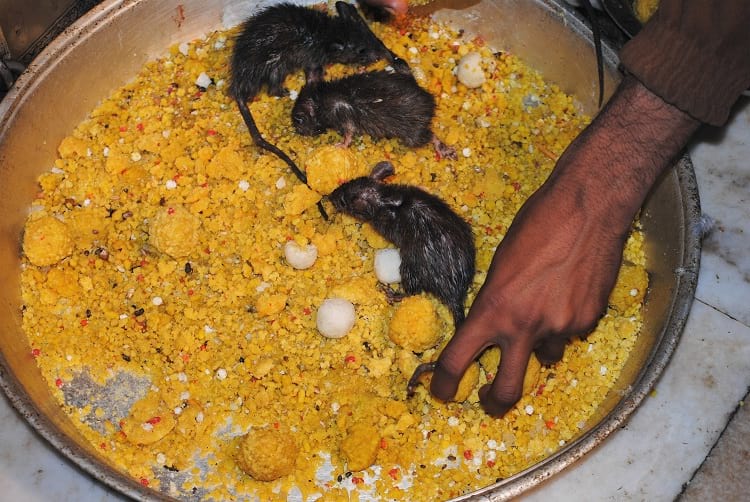 A man picking prasāda (a religious offering to the deities which is consumed by the worshippers) from a utensil while the rats feed on them. (Schwiki / Wikimedia Commons)

The temple of rats: An architectural marvel

The Karni Mata Temple was completed in the early 20th century by Maharaja Ganga Singh of Bikaner, and is influenced by the Mughal style of architecture. The Temple has solid silver doors and a beautiful facade made of marble to the front of the temple. The temple is also adorned with marble carvings that add to the charm of the structure. The solid silver doors inside the temple were donated by Maharaja Gaj Singh after he visited this magnificent temple he had himself sanctioned. Across the doorway, there are more silver doors that have panels which depict several legends about the legendary Karni Mata. The image of the goddess is housed within the inner sanctum, along with holy items placed at her feet. There is a 75 cm tall image holding a trident (Trishul) in one of her hands and is surrounded by rats. The statue of Karni Mata inside the temple. (Jean-Pierre Dalbéra / Flickr)

Her image also has a crown on her head and a garland of flowers around her neck. On either side, images of her sisters are also placed. The temple was beautified further in 1999, under the patronage of Kundanlal Verma who was a part of the Karni Jewellers based in Hyderabad.

White rats: The holiest of the holy rats

Among the many thousands of rats within the temple, there are a few white rats that are considered to be especially auspicious. These white rats are believed to be manifestations of the goddess Karni Mata herself and her sons. The sighting of these white rats is considered to be a special blessing. Visitors compete amongst themselves to try and lure these rodents out of their burrows by offering them food and sweets.

The Karni Mata Temple is opened up to the pilgrims and tourists in the early hours of the day, around 4 o’clock in the morning. The priests of the temple perform ‘Mangla-Ki-Aarti’ and offer special food known as ‘bhog’ during worship. The devotees that come to the temple make offerings to the holy rats that roam around all over the premises.

The Karni Mata Fair is held twice a year at the temple and is a major event. The first fair of the year is the larger one and takes place from March to April, i.e., from ‘Chaitra Shukla Ekam’ to ‘Chaitra Shukla Dashmi’.

The second fair of the year in Deshnoke is held in September – October, that is, between the ‘Ashvin Shukla’ to ‘Ashvin Shukla Dashmi’. This time of the year is known as Navratri and is auspicious in the Hindu calendar. Thousands of people travel to the Karni Mata Temple by foot during this season. Reliefs found on the facade of the temple. (Jean-Pierre Dalbéra / Flickr)

It is believed that even during the worst of the plague outbreaks, the town of Deshnoke which houses the Karni Mata Temple, is not affected. In fact, several pilgrims that travel to the temple not only go to worship the rodent inhabitants but also to heal their ailments. Devotees believe that these holy rats are endowed with healing powers. Legend claims that the rats living in the temple are immortal and never leave the temple premises. Another strange belief – devotees actually claim that it brings good luck if one of the rats of the temple runs across their feet.

The deteriorating health of rats

While devotees routinely partake on food tasted by the rats, which are deemed holy, there have never been reports of visitors falling sick. On the other hand, news of the rats themselves having health issues is not unheard of. The rats are regularly with way too much human food, including milk and sweets, for their own good. The highly sugary food and drinks have led to the rats ending up with stomach ailments and diabetes. The cumulative effects of these issues eventually leads to a major epidemic among the rats every few years, thus resulting in a horrific number of dead rodents lying around the temple complex. The lowered population of the holy rats of Karni Mata Temple, however, do not stay that way for too long, with the rats multiplying exponentially to reach the original population in no time.

Rajasthan is home to several tourist attractions- populated with renowned heritage forts, several exquisite temples, and offering exotic experiences like camel rides. The Karni Mata Temple holds its own as a marvellous structure with a rich cultural heritage, amidst the overwhelming atmosphere and exotic idiosyncrasies that is characteristic of India.

The best time to visit the Karni Mata Temple is said to be in the March-April or September-October phases when the fairs and festivities are at their best. However, devotees visit the temple throughout the year in order to seek blessings of the goddess and offer ‘bhog’. Tourists, both from around the country and international, come to visit the temple out of curiosity for the strange USP of the Temple of Rats.

Enjoyed this article? Also, check out “The Padmanabhaswamy Temple: The Richest Temple in the World with Gold Worth $22 Billion in Six Vaults“. 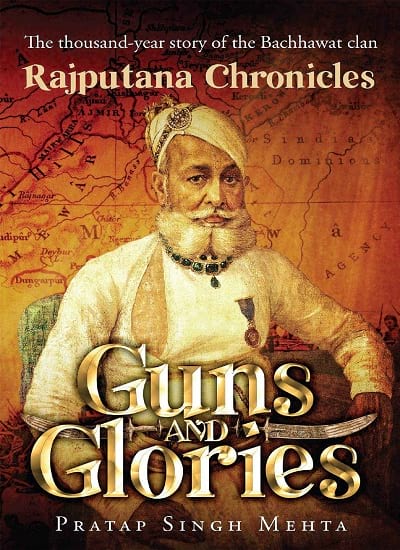 Previous Article
Ivan the Terrible: The First Tsar of Russia and His Reign of Terror
Next Article
The Coimbatore Kidnapping – The Abduction and Murder of Mukta and Ritesh Jain