The people who were in Dhanushkodi on the night of 22 December 1964 would never forget it as long as they live. On this night, a sudden cyclone from the South Andaman Sea, blown in by tremendous winds of velocities of 250 kilometres per hour and accompanied by 23 feet high tidal waves smashed into the town and destroyed it.

In one night, the entire town was wiped out and parts of it submerged as the sea rushed three kilometres inland. Over 1,800 people perished in the cyclone and the town was never rebuilt. The government of Madras declared it a ghost town; that is, a place not fit to live in.

Dhanushkodi: The town that was never rebuilt

Dhanushkodi is located on the south-eastern tip of Pamban Island in Tamil Nadu (state of India), about 20 km from Rameswaram (town). Its pristine beaches overlook the narrow Palk Strait that separates India and Sri Lanka – Sri Lanka is only about 30 km away – and it shares the only land border between the two nations. The town also watches over the confluence of the Indian Ocean and the Bay of Bengal. If you stand on the beach and look seawards, you can clearly see the green turbulent waters of the Indian Ocean on the right and the calm, blue waters of the Bay of Bengal on the left. It is almost as though this were an indication of the town itself, a place with a turbulent past and an almost eerily calm present.

The history of Dhanushkodi goes back to mythological times. The name Dhanushkodi can be broken up into two words: Dhanush, which means bow, and Kodi, which means end. So, Dhanushkodi means bow’s end. Whose bow though? Well, Lord Rama’s bow of the Hindu Epic, Ramayana. He pointed his bow end at Dhanushkodi twice. Once to indicate that this was where he, his brother Lakshmana, and their allies, Vibhishana, Hanuman, and the Vanar Sena were going to start building the Ram Sethu from, connecting Bharatvarsha to Lanka to rescue his abducted wife, Sita, from the clutches of the Rakshasa King Ravana. The second time was on his victorious return from Lanka, when, on Vibhishana’s urging, he used his bow end to destroy the bridge that they had just crossed on the journey back.

The nearby Kothandaramar temple, which is surrounded by the sea on three sides, also has a relation to Lord Rama. It was here that Lord Rama, having killed Ravana, crowned his younger brother Vibhishana as the next King of the Rakshasas.

Due to these associations with the Ramayana, the Hindus of India consider Dhanushkodi a holy town and frequent it on pilgrimages.

The Ram Sethu, incidentally, is also called Adam’s Bridge. It is clearly visible in the aerial view, remote sensing photographs that NASA astronauts took from space, and, according to NASA, it is a formation of naturally occurring sandbanks and not the mythological manmade bridge of floating stones. It is not unique, there are many such sandbank formations around the world. The public sentiment in India, however, is not going to be swayed anytime soon by NASA’s rebuttal. For centuries, we have called it the Ram Sethu bridge and we will continue to call it the Ram Sethu bridge. According to the local fishermen of Dhanushkodi, what remained of the Ram Sethu after Lord Rama destroyed it, was swept away by a cyclone in the 15th century. Like Dhanushkodi, it was never rebuilt.

Dhanushkodi in the British Raj

Dhanushkodi was quite a prosperous town during the British Raj. It was an important port town and the British used it to ship tea, spices, and other goods from India and Sri Lanka, then called Ceylon, to Europe. There was a regular ferry service between the town and Talaimannar on Mannar island in Sri Lanka. Dhanushkodi was also connected by railway to various parts of India. The Boat Mail train regularly came to Dhanuskkodi from Madras Egmore to let off passengers on Dhanushkodi’s southeastern side, from where many of them took the steamer to Sri Lanka. The town had a hospital, a school, a post office, a church, a railway station, customs and port (or post) offices, hotels and dharmshalas, textile shops, and all the other amenities that a flourishing town has. 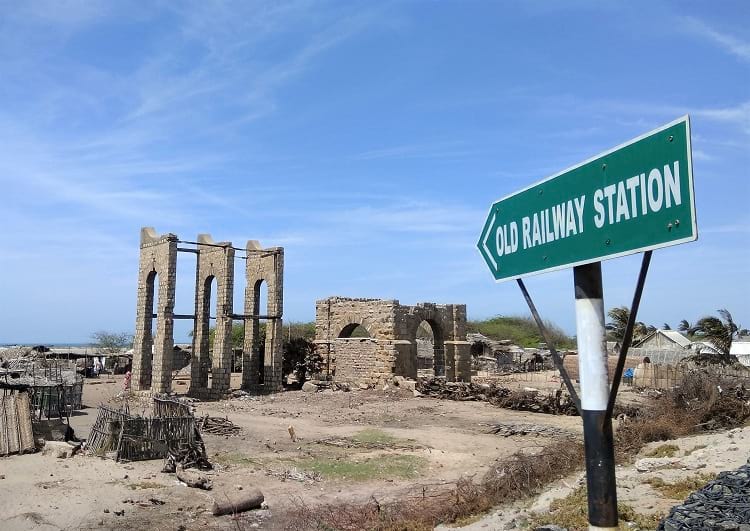 The night of the cyclone

The cyclone had been brewing for a while. It began with a depression in the South Andaman Sea on 17 December 1964 and it gathered force and moved landwards. The people of Dhanushkodi were caught unawares.

On the night of 22 December 1964, as the cyclone was about to strike Dhanushkodi, the Pamban-Dhanushkodi Passenger, a six-coach train that provided a daily commuter service between Pamban and Dhanushkodi, was nearing Dhanushkodi railway station. It was the last train of the day and there were 110 passengers on board this train, along with five railway staff members. As it approached Dhanushkodi, the driver did not see the expected signal in the pitch darkness of the night, and he blew a long, piercing whistle. At that juncture, the cyclone struck. An enormous tidal wave crashed into the train and flung it as if it were a toy into the roiling sea and destroyed the Pamban bridge. There were no survivors on the train.

Dhanushkodi itself was devastated, with heavy loss of human life and a near complete destruction of all the town buildings. Parts of the town went under water and those that remained above water level were isolated from one another. 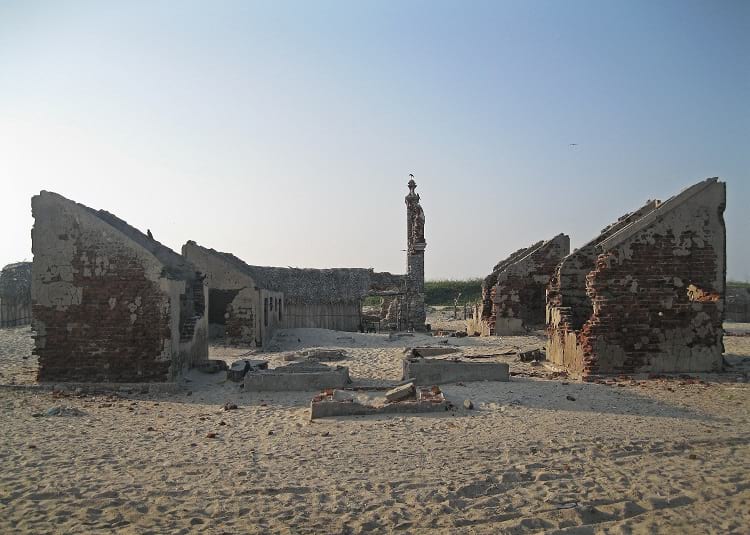 The storm continued unabated until the evening of 25 December 1964. The outside world remained unaware of what had happened in Dhanushkodi as it was impossible to establish any kind of contact until the storm had blown over.

The aftermath of the cyclone

After the devastation wrought by the cyclone, the coastguard evacuated the survivors and what remained of the town was abandoned. As mentioned earlier, the Madras government declared the town to be a ghost town and, except for some fishermen whose livelihood depended on the sea and who therefore stayed put, the rest of the surviving inhabitants of the town left and did not ever return. The parts of the town that the sea had claimed remained submerged underwater. According to the locals, these submerged parts were briefly revealed in the 2004 tsunami when the sea receded some 1,600 feet before rushing back in and reclaiming the town.

The railway links to Dhanushkodi, which once had railway connections to different parts of the country, were entirely destroyed and never restored.  Since the town was now abandoned, the government cut off the electricity and water supply as well.

Apart from the ruins of the town’s stone buildings, there are no other buildings in Dhanushkodi. The fishermen and their families, numbering around 500, who remained put, live in ramshackle with no electricity and running water. The fishermen eke out a meagre livelihood with their fishing and their wives collect water from springs that they claim came into being after Lord Ram shot an arrow into the ground. 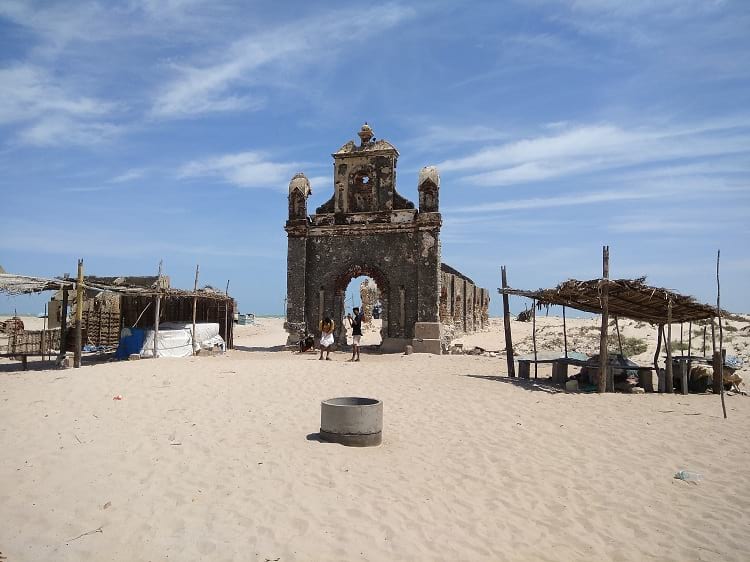 Until 2017, Dhanushkodi remained an isolated, nearly forgotten place. It was frequented mainly by tourists looking for a back of beyond destination and determined religious pilgrims. The main reason for this isolation was the difficulty in reaching the town. The railway connection was gone and there was no bus service. If you wanted to get to the town, you had to take a bus from Rameswaram to a village some 4 km away and then hire a van there for a rather pricey sum to take you the remainder of the way to the site.

When you reached the erstwhile town, there was nothing to do at Dhanushkodi. You might walk about amidst the stone ruins of the church, the post office, the medical college, the railway station, the hospital, the water tank, the school, and the other still-standing structures. Or you might gaze wide-eyed at the surpassing beauty of the pristine beaches, the green-blue sea, and the deep-blue sky. After a few hours, the waiting van would summon you for the return journey. Nobody can remain in Dhanushkodi after 6 p.m.

In 2014, the Indian government decided to connect Dhanushkodi to Rameswaram with a tar road. This was ostensibly done to improve a lot of the impoverished fishermen. The road connection was completed in 2017 and now you can drive right up to the former town.

Even so, the place retains its almost otherworldly charm. If you can, visit Dhanushkodi early in the morning and spend an entire day on the beach. If you are lucky, you will get an entire isolated stretch of beach to yourself. Wade into the shallows and watch a breathtakingly beautiful sunrise. Walk on the soft sand until you are tired and then lay back to gaze up at the sky and listen to the music of the rolling waves. You will feel completely unconnected from the world and completely at peace.

What one gets from Dhanushkodi is a story of human resilience and a warning to not underestimate the might of nature. We remain at the mercy of natural forces like all living creatures on this planet. With one sweep, we could lose everything.

Enjoyed this article? Also, check out “The Disappearing Aral Sea and its Abandoned Ships“.