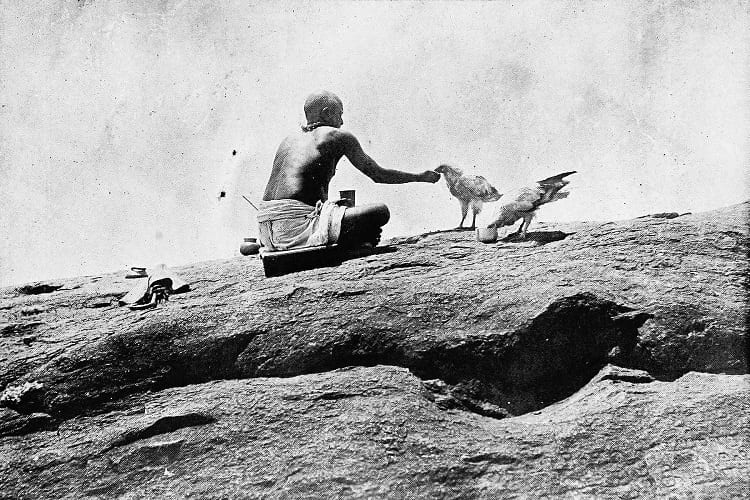 Some of India’s temples are famous not only for their architectural finesse, their beautiful surroundings, and the piety they invoke in believers but also for certain quite inexplicable happenings that continue to baffle onlookers. The Vedagiriswarar Temple is a fine example of this. For several centuries, the temple was famous for hosting a remarkable pair of birds that appeared exactly at noon to accept prasad from the temple’s priest.

The birds of Vedagiriswarar Temple

Nobody knows exactly when the birds started arriving at the upper temple, but they came regularly for many centuries. They alighted on a rock near the temple at noon on the dot and then the priest would feed them a prasad of ghee, sugar, rice, and wheat. If on occasion, the Egyptian Vultures did not show up, it was on account of the presence of sinners amongst the crowd (or) onlookers.

The Temple authorities and the devotees do not consider the Eagle Vultures to be ordinary birds, but there are differing folklores about what they actually are.

According to one version, the Eagle Vultures are the eight sages or Asthavasus who once displeased Lord Shiva and the quick-tempered God then cursed them to live as birds until they had performed penance. Lord Shiva ordered them to visit his temple in Vedagiriswarar to pray to him and receive prasad from the temple priests. The birds lived for three yugas or epochs, with six of the sages getting mukti (emancipation) and the last two surviving to the present epoch.

By another version, the Eagle Vultures are Sage Poosha and Sage Vruddha. They once prayed long and hard to Lord Shiva in order to obtain the elevated Sharoopa status. Lord Shiva, however, was willing to grant them only the Sayujya status at that time and said that he would consider granting them the Sharoopa status later perhaps when he thought they were worthier of it. Instead of accepting what Lord Shiva offered them, the two Sages argued with him and insisted on being given the Sharoopa status right then and there.

Angered by their insistence, Lord Shiva cursed them and turned them into Eagle Vultures and informed them that they would remain birds until the end of the Kali Yuga. In the meantime, they were to worship him at the Vedagiriswarar Temple. For generations, the birds followed his diktat and appeared at the temple. In the Thretha Yuga, they went by the names Sandan and Prasandan. In the Kritha Yuga, they called themselves Sambathi and Jadayu. In the Dhawapara Yuga, they called themselves as Sambhukthan and Mukundan. Now, in the Kali Yuga, they are Pusha and Vidhadha.

The local lore tells us that the birds daily fly across a distance of some 3218 km from Varanasi to Thirukazhukundram to feed at Vedagiriswarar Temple at noon and then first fly southward to Rameswaram and then northward to Chidambaram to spend the night there for some much-needed rest. The next morning, they fly to bathe in the Ganges in Varanasi and the return again by noon to Vedagiriswarar Temple.

Egyptian Vultures are birds that normally congregate in flocks and feed on carcasses. For only a pair to appear on a regular basis at Vedagiriswarar Temple and that too to feed on food that is not the natural food of Vultures is odd behaviour, if you consider the matter from a scientific point of view. Some bird researchers think that if the birds have been coming to the temple for centuries it is on account of learned behaviour that the parent birds have passed down to their progeny or from bird relatives to other birds.

Since 1998, the Egyptians Vultures have stopped showing up at Vedagiriswarar Temple. It may be because there are too many sinners flocking in the area. Or it may be that the last pair of Ashthavasus has finally attained moksha. Or, more prosaically, the last pair of Egyptian Vultures failed to either raise a new generation or failed to point them in the direction of the temple or failed to cultivate in them a taste for the temple prasad.

No one knows what the reason is exactly, but the priests at Vedagiriswarar Temple continue to scan the skies and keep vigil in the expectation that the birds may one day return as they did in past centuries.

Dedicated to Lord Shiva and located in the town of Tirukalukundram, also called Thirukazhukundram, in Tamil Nadu, the Kings of the Pallava Dynasty built the temple and it displays some of the best elements of ancient Dravidian architecture. 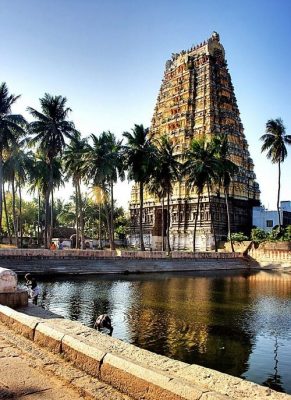 Vedagiriswarar Temple is actually a temple complex that has two temples. One of the temples is at the foot of the hill and the other one is at the top of the hill. You must climb over 500 steps to reach the upper temple.

Lord Shiva resides in the upper temple and his consort, Parvati, resides in the lower temple. Vedagiriswarar is one of Lord Shiva’s many names and Parvati, in this instance, goes by the name of Thiripurasundari Amman.

Her temple, the Bakthavatchalaeswarar Temple, covers a large area of around 10 acres and has exquisite architectural features that include four gopurams, curved mandapams, and a high compound wall. The architectural style is similar to that of the Annamalaiyar Temple. There is also a huge water tank called Sangu Theertham that looks almost like a lake. The water contains minerals that confer it with health-giving properties and the priests use it to perform the abhishek rites on the temple deities. Devotees can drink this water.

Another remarkable thing about the Sangu Theertham is that every 12 years a Sangu or Couch Shell emerges from the depths and floats on the water surface. The priests have collected these Couch Shells and made them available for public viewing.

According to Hindu Mythology, Vedagiriswarar Temple sits on top of the tallest of the four Vedic hills – hence the name Vedagiri or mountain of the Veda – that Lord Shiva created to fulfil Sage Bharadhwaja’s wish to master the four Vedas. The Sage wanted to live for a very long time, so he would be able to learn everything in the Vedas.

Shiva granted him his wish but informed him that learning was a never-ending process and no matter how long one lived one could never know everything there was to know in the Vedas. Spending years learning the verses in the Vedas, therefore, wasn’t the proper way to attain to salvation. For true salvation, one needed genuine devotion or Bhakti.

In addition to being called Vedagiriswarar, devotees also call the temple Kazhugo Koil, which means an Eagle Temple, and they call the surrounding town Pakshi Theertham or a Pilgrimage Place of Birds. Interesting, the official name of the town, Thirukazhukundram, also pertains to birds in the Tamil language. Thiru means respectful, Kazhu means an Eagle or a Vulture, and Kundram means mount. So Thirukazhukundram means Respectful Mount of the Eagle or Vulture.

Previous Article
Whipping Boy: When Young Slave Boys Took a Beating for the Mistakes their Masters Had Committed
Next Article
Mt Etna: The Highest Active Volcano in Europe, A Popular Tourist Destination