The Jewel of Manipur: The Loktak Lake is the Only Floating Lake in the World 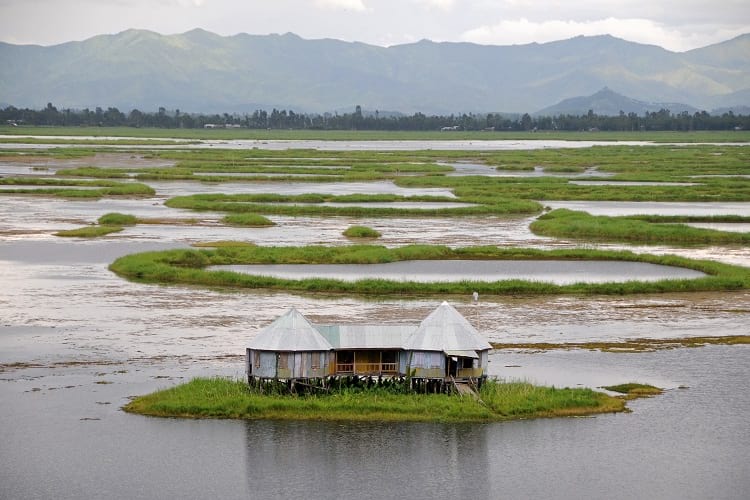 Situated near Moirang in the state of Manipur, India, Loktak Lake is the largest freshwater lake of North-eastern India. The unique phumdis, a heterogeneous mass of vegetation, soil and organic matter at various stages of decomposition found floating over it, characterises the waterbody. Loktak Lake’s claim to fame is its reputation as the only “floating lake” in the world.

An overview of the Loktak Lake

The Lake is located about an hour’s drive away from the capital city of Manipur, Imphal. The Loktak Lake houses more than 700 species of flora and fauna- aquatic as well as on the ground. Whether it is the diversity of migratory birds, or the unique indigenous animals, the natural wildlife of the region is truly astounding.

Loktak Lake was at first deemed as a Wetland of International Importance by the Ramsar Convention of March 23, 1990. The Montreux Record listed the site as a Ramsar site where changes in ecological character have occurred, are occurring or are likely to occur.

Keibul Lamjao National Park, the only floating national park in the world, is located near the Loktak Lake, which makes this belt even more interesting. The endangered brow-antlered deer of Manipur, known as the Sangai, also resides here. This majestic beast is the official animal of the state, and its hooves are perfect for walking on the native phumdis.

Home to diverse flora and fauna

Loktak Lake is a paradise for birds. Out of the 101 species of birds that are found in Loktak, three are globally threatened. Some of the rare birds found are the Common Pochard (vulnerable), Ferruginous Duck (near threatened), Japanese quail (near threatened), and Manipur Bush Quail (endangered). Also found, are the Northern Pintail, Gadwall, Greylag Goose, Red Collared Dove, Sarus Crane, Great White Pelican, Black Kite, Pied Kingfisher and the Oriental Skylark. Some of the gorgeous fauna inhabiting the region includes the Indian python, sambar, barking deer, rhesus monkey, hoolock gibbon, Indian civet, and Temminck’s golden cat.

An approximate of 1,500 tonnes of fish is sourced from the Lake per year. The State Fishery Department introduced several fingerlings of Indian and exotic major carps. The new varieties of fish introduced in the lake include silver carp and grass carp. Old varieties of local fishes like ngamu, ukabi, ngaril, pangba, tharak, and ngashap which were near decline have also been reintroduced into the system.

The lake has a rich biological diversity that includes more than 200 species of macrophytes that survive in water.

The Loktak Lake region is a source of exotic beauty that has allowed the local tourism industry to thrive. The role of the Lake goes much beyond this, however, and has an important role to play in other aspects of the economy of Manipur as well.  It acts as a source of irrigation, drinking water supply, and also provides water for hydropower generation. The Loktak Lake also sustains the livelihood of the fishermen living in the area. 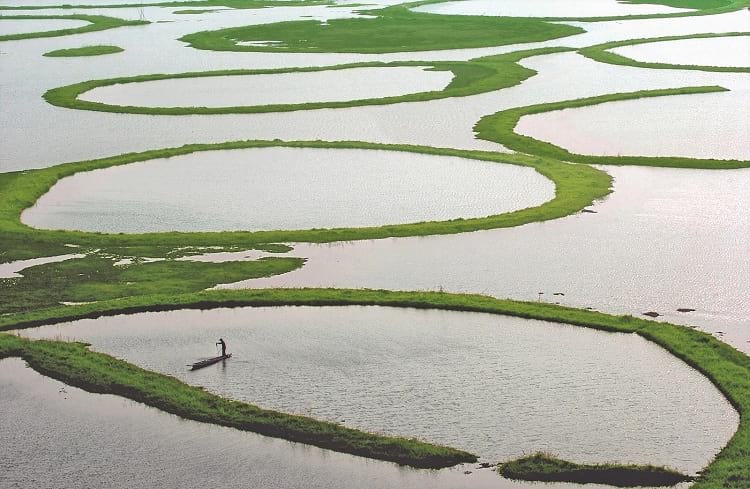 A fisherman out for a catch at the Loktak Lake. (Sudiptorana / Wikimedia Commons) Breathtaking sites around the lake

One of the most exotic experiences in the region would be the early morning boat rides deep into the heart of Loktak Lake. Local long-tailed fishing boats are a popular mode of transport that is often let out for tourism purposes as well. Another interesting occurrence in the region is the peculiar mode of travel that often comes as a surprise to tourists- vehicles accommodating at least 4-5 on top of its roof.

The exquisite floating islands housed within the Loktak Lake are made of decomposed biomass. These islands have small huts with thatched roofing which the fishermen use as their homes on a regular basis. These islands embody the essence of the Loktak Lake region and the lifestyle of the inhabitants, thus making for a popular tourist attraction as well.

A haven in danger

The Loktak Lake, like most of nature’s havens, is now endangered due to pollution, decline in diversity of the fauna, and the thinning of phumdis. There has also been a loss of green cover in the area around the catchment. Deforestation and shifting cultivation has hastened the process of soil erosion, thus leading to the shrinkage of the Lake’s perimeter due to siltation.

The thickness of the phumdis has reduced significantly in the Keibul Lamjao National Park, which threatens the Sangai deer. This also affects the migration of fishes from the Chindwin-Irrawaddy River System of Myanmar. There has been a huge decrease in cultivated plantations, as well as major food plants, resulting in starvation of the endangered Sangai deer. Because of the thinning of the phumdis, the hooves of these deer get stuck in the marsh which often causes them to drown. The production of the edible fruit and rhizome of lotus plants has reduced by a huge margin. There has been a degradation of plants due to water pollution as well. The people whose livelihood depends on the selling of edible lotus plant products have greatly suffered from the sudden decline in their growth.

Despite the many threats that the Loktak Lake is currently facing, the locals still regard it as the crowning “jewel” of Manipur. The locals living in the area not only value the lake, but they also see it as a natural treasure. The lake has been home to them and provided them with their means of livelihood. The tourist attraction also adds to the growing economy of the state. However, much needs to be done in order to protect and preserve the Loktak Lake, as well as the sole floating national park across the world- the Keibul Lamjao National Park. If the pollution around the region is not kept in check, this treasure trove housing hundreds of unique flora and fauna will soon be extinct.

Previous Article
Lockheed Blackbird SR-71: The Fastest, High-Altitude Reconnaissance Aircraft in the World
Next Article
The Story of the Last Tree of Ténéré is Short and Sad