Whipping Boy: When Young Slave Boys Took a Beating for the Mistakes their Masters Had Committed 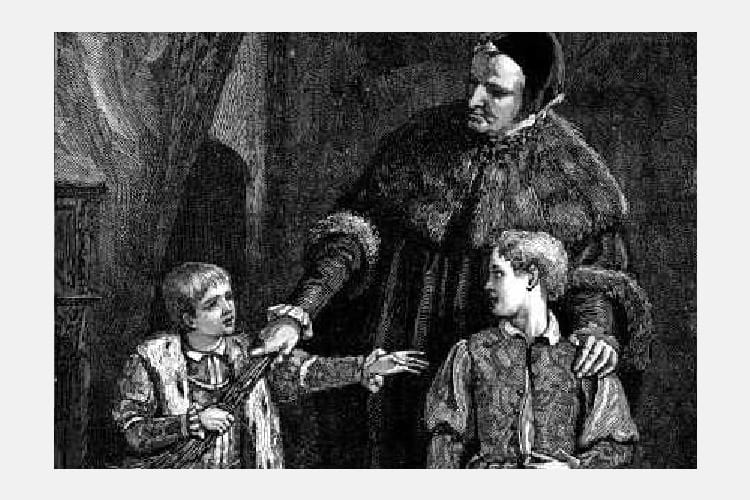 What can be the best way of showing loyalty and commitment to one’s master? Maybe to give one’s life in the line of duty. But could it also be taking the punishment for the fault of Master? That too not as a matter of exigency, but as a consistent and bounden duty? Seems strange and even disgusting. But that was the way of the Royal families of England during the 16th and 17th Century. The whipping boy’s story is that of a slave who suffered punishment on behalf of his master.

The Tudor and Stuart Monarchs of England had a custom of keeping ‘whipping boy’, who, as the name suggests, took the beating if the Crown Prince committed any mistake. Whipping boys were no innocents picked up for this seeming injustice. They were buddies of the Royal Princes who lived with them and shared their noble privileges. As for punishing them on behalf of the Prince, the explanation given was that the Prince would suffer mental agony in the knowledge that his friend suffered for his (Prince’s) mistake. This searing thought would mend the Prince for future and reform his behaviour.

Proxy punishment was not tentative and baseless

What lay at the root of such indirect punishment? It was of the assumption that kings were the agents of God on the Earth. This was said in clear terms by James I in his Parliamentary speech in 1609. Hence, royal blood couldn’t be punished by ordinary mortals. The only person who could punish the Prince was the King himself but he was generally too busy to attend to family.

Who all patronized ‘whipping boy’?

The practice probably originated in the 16th century when Edward VI became king at the age of 10 years. The corporal punishment to the King was unthinkable even if he was an immature growing lad. So the practice may have begun as a safety valve for a boy monarch who couldn’t be punished but nevertheless had to be trained and sensitised to his mistakes. King Edward is said to have had two whipping boys. One Barnaby Fitzpatrick, an Irish. Another English boy named Edward Browne. But the contemporary information in support of this claim is lacking. William Murray is said to have served as whipping boy for Charles I in the 16th century and was profusely rewarded for his services. Louis XV of France too had a whipping boy in his childhood.

Conrad, King of Jerusalem and later of Italy (1228-1254), says history, was extremely mindful of his conduct as a growing child. Reason being he had a pack of 12 companions (whipping boys) who would suffer bodily punishment for any demeanour unbecoming of him. Richard Croke, mentor for Henry Fitz, 1st Duke of Richmond and Somerset (1519-1536) had complained against another tutor, George Cotton. The complaint, made in 1527, was that Cotton had withdrawn whipping boys engaged for the royal kid, saying it was inappropriate for Croke to punish them in Henry’s presence.

Idea of proxy physical punishment finds a place in literature too. The play ‘When You See Me You Know Me’ by Samuel Rowley describes the pain of a proxy of the future Edward VI. In one of his sermons, in 1628, John Donne preached that proxy punishment was good, but a sick or ailing proxy shouldn’t be punished. Malagrowther, a fictional character in Walter Scott’s Fortunes of Nigel (1822) is shown as the whipping boy of James VI of Scotland.

English origin of the custom doubted

David Norman Beach (1943-1999), the English historian was chary of accepting that such a custom ever existed. He wondered if it was a canard cooked up in Queen Victoria’s time (1837 to 1901) to defame their ancestors. He felt that the idea came from Stuart dynasty which succeeded Tudor dynasty (one of the best known in history) and thrived from 1603 to 1714 amid lots of tumult and turmoil. It is also likely that the idea of whipping boy (or something similar) came from dictatorial eastern monarchies (Persia, China, Egypt etc.) in ancient or medieval times. There are stories about children of pharaohs watching their playmate fed to crocodiles. The prince had not done his homework, hence his ‘whipping boy’ was thrown to crocodiles as a punishment.

The idea has a parallel in Bible stories

The 1530 Bible translated by William Tyndale talks of the Day of Atonement. On this day a goat was chosen to carry symbolic sin-load of the people. The priest laid his hands on the head of the goat and then it was let loose into the wilderness. It was believed that the sins of people got cast away along with the goat that walked into the wilderness. The word ‘scapegoat’ has originated from this background.

There is no clinching evidence to suggest that ‘whipping boys of the early English Period’ were an accepted and established norm. Yet, scattered references to it, or something similar, pop up in history and mythology. And these references are hard to ignore.