Ever since man journeyed from the Stone Age into modern times, he has tamed a variety of animals that have accompanied him as pets. Right from dogs and cats to some even keeping fish and lizards as their animal companions, humans have tried all sorts of creatures to keep them entertained. But have you heard of the Madagascar Hissing Cockroaches that have gained immense popularity as pets? Humans have accepted these tiny insects as pets that live with them in the confines of their homes.

Commonly called the Madagascar Hissing Cockroach, it goes by the scientific name Gromphadorhina portentosa. It belongs to the invertebrate type and class insecta. As its name suggests, it is native to the island nation of Madagascar, off the coast of the African continent. It is one of the largest species of cockroaches and can grow up to a size of two to three inches at maturity. In the wild, the hissing cockroaches can live for two to five years on an average. They are oval in shape, have a single pair of hairy antennae (typical of males, while females have smooth antennae) and look like any other ordinary cockroach, with a shiny, reddish-brown back and black-coloured head, except that they do not have a pair of wings. They are excellent climbers and can even scale smooth surfaces. One peculiarity that separates the males from females is that the male cockroaches possess horns, which serve a dual purpose. These are used to intimidate its rivals and also impress probable partners.

The horns of the male hissing cockroaches are also used in a similar way a deer uses its antlers. During a mating competition, when two male cockroaches battle it out for female attention, the two warring males can stand up on their hind feet, while their horns are interlocked, pushing and shoving each other with their bellies to win a female’s affection. These unusual horns at the back of their heads make them more impressive from a female’s perspective. The unique action of ramming into rivals is generally uncommon in insects of this order. 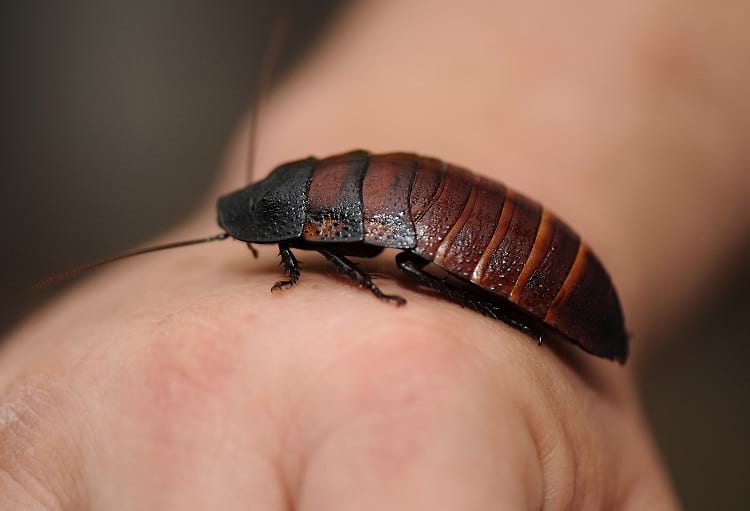 The female giant Madagascar hissing cockroach is very different from the other cockroach species in the sense that it is ovoviviparous. It lays eggs and also gives birth to live offspring (although it is not a placental birthing). The female carries the eggs inside her body in a special casing called ootheca, which roughly after a 60-days gestation period, are born as live young ones. A female hissing cockroach can give birth to at least 20 to 60 young ones at a time. A young hissing cockroach, also called a nymph, can reach maturity within a short span of seven months.

How does the Hissing cockroach hiss?

An insect rubs its feet against its wings to produce a sound, which helps it fend off its predators and also attract its mates. But since the hissing cockroaches do not possess a pair of wings, they have a pair of specially-modified breathing pores at the abdomen, which forms a part of their respiratory system. The Madagascar cockroaches forcibly expel air through these pores, also called spiracles, to produce sounds, which are audible to the human ears. As per entomologists, the hissing of these roaches sounds similar to a snake’s and it helps the giant cockroach keep its hunters at bay.

The hissing is also louder during their courtship interactions and can be more audible when a male has won a competition. Entomologists also confirm that a size of a male Madagascar roach can be judged by its sound. The louder the hiss, the bigger the insect is. Surprisingly, each cockroach can distinguish between sounds of a familiar cockroach and a stranger’s. Also, a cockroach’s hissing can be of three types: one that is used as a mating call, the other that it makes during a fight and the third one to scare away predators or when it is disturbed.

The Madagascar hissing cockroach is mostly found in the wild regions, hidden in rotting pieces of wood or detritus. They function in warm climates and are mostly nocturnal, although some might wander in the forests in search of food during the day. Typically scavengers of the insect kingdom, they are detritivores, meaning they feed on rotting leaf and fruit remnants fallen on the forest floor, along with decaying animal carcasses. They derive their nourishment from high protein foods, which are readily available in the wild.

The giant roaches can also be kept as exotic pets due to their adaptability and the trend has caught on in the recent years. Although some countries require a permit to allow this activity, most states freely let these insects to be kept indoors. They are low-maintenance and do not need large spaces to thrive. They do not bite or sting and can even survive on dog food or fresh vegetables and fruits as domesticated creatures. They are not pests and do not disturb until bothered. They generally do not pose problems to humans, except that some people may be allergic to the species or during times when the exposure to these insects is prolonged. The pet Madagascar Hissing Cockroaches do not pose any serious health threats to their human masters but recent research has found out that mould on the body of the insect can be a potent allergen. Also, a buildup of their faeces, in the absence of regular cleaning of their enclosures, can be a breeding ground for harmful microorganisms that can cause allergies in humans. The regular shedding of their shells can also give rise to microbial activity, which in turn, can cause nasal allergies and other infections in humans.

While the IUCN Red List terms them as a matter of least concern, the rare Madagascar Hissing Cockroach continues to live freely in the wild in all parts of the world today. Not really a pretty sight at first, these giant cockroaches still make great pets and keep their masters entertained.

Previous Article
Astana: An Ultra Modern Capital City Right in the Middle of Vast Empty Grasslands
Next Article
Whipping Boy: When Young Slave Boys Took a Beating for the Mistakes their Masters Had Committed