Pamban Bridge: A Historic Indian Sea Bridge That Was Built on Modern Principles India is a culturally rich country and South India, in particular, is very different from the rest of the nation. Lined by the blue waters of the ocean and dotted by palm trees, the southern part of India has diverse climatic conditions as compared to the whole of India. Falling on the eastern coast of the country, the southernmost state of Tamil Nadu has a unique and first-of-its-kind bridge in India, which till date, not just inspires but also fills every Indian with a sense of pride. The approximately 2.3-kilometre-long Pamban Bridge is the first ever Indian sea bridge, connecting the port town of Rameswaram on Pamban Island to Mandapam on the Indian mainland in Tamil Nadu. 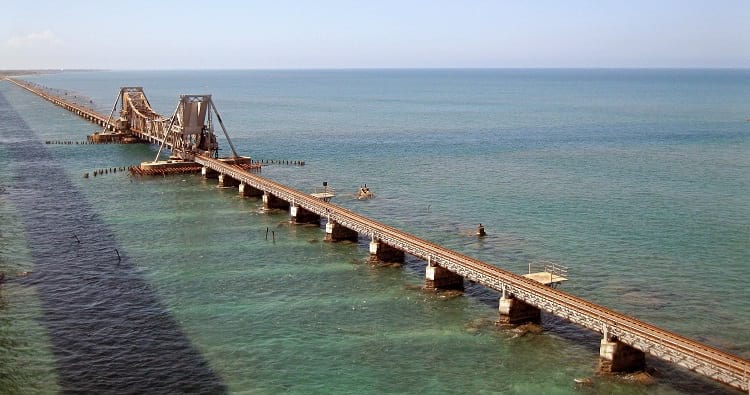 Basics of the Pamban Bridge

Way back in the 1870s, when the colonial British wanted to open trade with Sri Lanka (then known as Ceylon), they came up with the idea of a bridge for transport purposes. However, the plan was only put in motion in the year 1911 and the first ever Indian part-cantilever-part-conventional bridge was opened in the year 1914. More than a hundred years old now, the Pamban Bridge was the only way of getting to Rameswaram, until a parallel road bridge was constructed in 1988, easing transport further. Designed as per the specifications patented by German-origin American engineer William Donald Scherzer, the movable drawbridge or double-leaf bascule bridge can be rolled up vertically to allow movement of ships underneath. Six men on each side manually roll up the two spans to clear sea traffic below. This bascule feature was one of the firsts for any Indian bridge constructed during the British times. The Pamban Bridge has as many as 143 fixed spans in total and one pair of navigation spans, on which the concrete railway overpass rests, supporting train movement day in and day out. Sitting on an artificial reef, it required nearly 5,000 tonnes of cement, 2,600 tonnes of steel and 98,000 cubic feet of rocks and crushed stones to construct the bridge. Standing on the Palk Strait between the countries of India and Sri Lanka, The Pamban Bridge is located in one of the most corrosive environments in the world. It is also the location of high-velocity winds, which the historic bridge has withstood for over a century. This corrosion-causing climate, along with the windy weather, poses a great threat to the structure every now and then, making its maintenance a little too difficult.

Mythological significance of the Pamban Bridge

Experts argue that Ramayana, which is the epic tale of victory of Lord Rama over the demon king Ravana, has Pamban Bridge’s mention in it. As per the Ramayana, it is nothing but Rama Setu, which the future king of Ayodhya had built. It is said that Rama Setu was manually constructed by Lord Rama, employing Lord Hanuman’s Vanar Sena and many other animals to get to Lanka, where Ravana had held his wife Sita captive. It is also said that the ghost town of Dhanushkodi, situated in south-eastern Pamban, is where the Rama Setu originates and can be seen from space. Pamban bridge (on the right) next to the Annai Indira Gandhi Road Bridge (on the left). (ShakthiSritharan / Wikimedia Commons)

Accidents on and off the Pamban Bridge

Completed in a span of fourteen years, the Pamban Bridge once fell into the eye of a storm literally during the 1964 Rameswaram Cyclone. The powerful typhoon not only overturned a train carrying 150 passengers, killing all of them and breaking a part of the bridge too; but it also ripped apart Dhanushkodi, which till date remains in shambles and uninhabited ever since. In the year 2013, a barge belonging to the Indian Navy collided with the Pamban Bridge, but thankfully, the damage it had caused was very little. Repair and maintenance works had briefly halted railway services to Rameswaram from Tamil Nadu.

Initially functioning as a meter-gauge railway line, the bridge only got a major facelift in 2007, when a broad-gauge line was introduced, allowing even goods trains to ply between the two towns. As recently as 2016, the Indian Ministry of Railways has sanctioned approximately 3.5 million US dollars to replace the heavy manually-operated Scherzer spans by a mechanically-operating one. The engineering marvel has become a tourist attraction of late, which initially was only used by the railways to ply pilgrims to and fro from the holy Hindu town of Rameswaram.

Considered one of the scariest yet most beautiful train travels in the world, made with limited technology available back then, the historical Pamban Bridge is now vying for a UNESCO world heritage tag, which it rightly deserves so.

Enjoyed this article? Also, check out “Puente Nuevo: The Bridge That Spans Across a Gaping Canyon to Join the City of Ronda“.

Previous Article
Sex in Space – Is It Possible? and Why It is Important
Next Article
Thich Quang Duc’s Self Immolation – The Vietnamese Buddhist Monk Who Set Himself on Fire