Even if you are not very familiar with Vietnam’s history, you may have come across the famous photograph of a Buddhist monk seated on a Saigon street, engulfed in flames. It is one of those shocking images that, once seen, is hard to erase from the memory. You might wonder what the person taking the photograph was thinking at the time and what the person undergoing the unbearable act of self immolation was feeling. The monk was Thích Quảng Đức, a Vietnamese monk of the Mahayana Buddhist sect, and his self-immolation on 11 June 1963 on a busy street intersection in Saigon was a planned public protest against the anti-Buddhist policies and persecution of Vietnam’s Roman Catholic President Ngo Dinh Diệm.

The photograph was taken by an American journalist named Malcolm Browne and he later received the Pulitzer Prize for capturing the monk’s last moments.

Persecution of the Buddhists in Vietnam

To understand how a Roman Catholic minority could persecute a nearly 80 percent Buddhist majority, we will need to go back to Vietnam’s colonial past. The French ruled over the country from 1884 to 1954 and one of their ‘civilizing’ policies was to enforce their Roman Catholic faith on to the traditionally Buddhist Vietnamese people.

If you wanted to advance in your career, especially in a government post under the colonial rulers, you would have higher chances of managing it if you renounced Buddhism and became a Roman Catholic. Many Vietnamese took the practical point of view and switched their religions. It is entirely possible, of course, that some of them may have been genuinely convinced that along with the financial windfall, it would bring them a spiritual bonanza as well.

In any case, so by the time the nationalists ousted the French and Ngo Dinh Diệm became the President, there was a Roman Catholic elite in the government and the years of colonial rule had sufficiently bamboozled them into imagining that religion mattered more than a common shared ancestry and cultural heritage. They continued the French policy of assuming a superior attitude and looking down on the nation’s Buddhist population.

If you were a Buddhist in Vietnam at the time, you would face difficulty in securing a government job, and, once you did, you would find yourself being passed over for promotion. It was the same story if you were in the Vietnamese army. In the rural areas, the government could force you to leave your village and move to a less favourable location. They could prevent you from receiving the aid that the US Americans sent to the Vietnamese people.

They could refuse to give you the arms and ammunition that they distributed to Roman Catholic village militias for self-defence purposes, and they would not interfere when these latter militias harassed you, looted your wealth, shelled your homes, demolished your Buddhist shrines, and tried to force you to convert to their religion. The government would also force you to perform the corvée labour which you didn’t have to do if you were a Roman Catholic.

There were instances of people converting en masse to avoid these and various other persecutions.

The Vietnamese government also retained the old French diktat of making Buddhism a private religion. This meant that you could only worship the Buddha in private and it was illegal to perform any public Buddhist rituals or even fly the Buddhist religious flag in public, even in a Buddhist religious shrine. Meanwhile, the Roman Catholics could take over the streets with their religious parades if they wanted and fly the Vatican flag at will whenever and wherever they wanted. 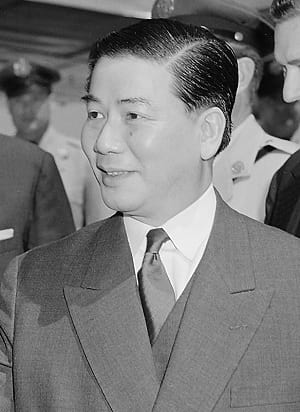 To home in the point further, President Ngo Dinh Diệm paid homage to the Virgin Mary on his nation’s behalf in 1959. According to him, even though Buddhism was the religion of the majority, it had no place in his vision of modern Vietnam.

The Buddhist monks of Vietnam took the lead in protesting against such discrimination and began demanding an equal treatment for all citizens.

They reacted to the ban on the Buddhist flag by marching with a huge crowd to the government broadcasting station on Gautam Buddha’s birthday, Huế on Vesak, in early May, defiantly holding forth their Buddhist flags. The government responded by firing on them, killing several of the protestors. The brutal response shocked the nation, but President Ngo Dinh Diệm was unapologetic and remained determined to crush all Buddhist opposition.

Far from being cowed, the Buddhists gathered reinforcements and heightened their anti-governmental agitation. International onlookers like the US Americans took notice and began pressuring the government to meet the demands of the Buddhists. President Ngo Dinh Diệm hedged around the issue and did exactly nothing.

The senior Buddhist monk, Thích Quảng Đức, now made his appearance on the stage of world events.

Born in 1897 as Lâm Văn Túc, Thích Quảng Đức came from a rural family of modest circumstances and began studying Buddhist precepts at an early age from his maternal uncle. Becoming a monk when he was 20, he took on the Dharma moniker of Thích Quảng Đức and embarked on a lifelong mission of spreading the Buddha’s message throughout Vietnam.

Over the years, he built himself a solid reputation as a capable individual with strong principles.

The self-immolation of Thích Quảng Đức

Convinced that a drastic action was necessary to force the government’s hand, Thích Quảng Đức decided that there was no other course than self-immolation.

Vietnam had a long history of monks immolating themselves to protest against governmental policies.

The main difference between the previous incidences and this one was that members of the Western Press had not had the opportunity to capture those instances.

On this occasion, the Buddhist monks informed the Western journalists in advance that something major was going to happen and they should come to the predetermined location at the set hour. Interestingly, most of the journalists took no notice and did not bother to turn up. Buddhists protesting against governmental iniquities had become all too common and more or less old news and they didn’t think there would be anything of note to report.

Only a handful of reporters came, Malcolm Browne of the Associated Press amongst them.

As many of the journalists recollected later, the Buddhists came in a car procession and stopped at the intersection. Thích Quảng Đức emerged from the car in yellow robes and sat down in the middle of the street, assuming the lotus position. Another monk took a can of gasoline from the car and proceeded to pour it down the seated monk’s shaven head. Thích Quảng Đức remained composed and serene. When the monk finished pouring the gasoline and stepped back, Thích Quảng Đức calmly lit a match and dropped it down in his lap. His body instantly caught fire.

A monk assisting Thich by pouring gasoline on him. (AP Photo)

The watching public and the journalists shouted out in horror, but the ablaze monk remained seated, not moving a muscle, his expression retaining its tranquillity.

In about ten minutes, the fire burned him to a black mass and then the other monks approached and carefully draped a cloth over him and placed his body into a prepared coffin.

They gave him a religious cremation later and discovered in its aftermath that the flames failed to burn his heart and it remained intact.

The immediate public reactions of disbelief and horror found a 100-fold echo when newspapers around the world published and republished Malcolm Browne’s iconic and disturbing photographs. Foreign governments and especially the US government, under President John F. Kennedy, were quick to condemn President Ngo Dinh Diệm and his government and hold them responsible for the monk’s gruesome death. 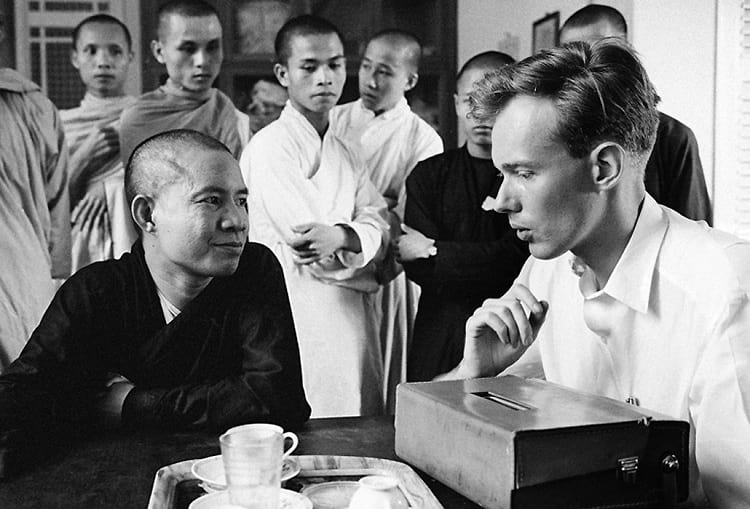 President Ngo Dinh Diệm attempted to carry out damage control by addressing the nation in a radio broadcast later that night and informing the listeners that he was about as much disturbed by the self-immolation as everyone else in the country. He promised to investigate the issues the Buddhists were protesting and to make any necessary reforms.

He had no intention to follow through on this public promise and very few of the public believed he would. His sister-in-law Trần Lệ Xuân, the wife of Ngo Dinh Nhu, his younger brother and right-hand man, was openly scathing about the monk’s self-immolation. She announced she would clap her hands at another spectacle of a “monk barbecue.”

A few days later, the government’s ARVN Special Forces began raiding, looting, and damaging Buddhist shrines around the country. During one of these raids, they seized Thích Quảng Đức’s heart, which his associates had carefully safeguarded since his cremation. The government proclaimed that the monk was probably a CIA asset that the CIA had drugged and forced to commit suicide. If not that, perhaps Malcolm Browne had paid him to immolate himself just to get an attention-grabbing photograph.

The Buddhists stepped up their protests in the coming weeks and months and still more monks followed in Thích Quảng Đức’s footsteps and burned themselves.

While their self-sacrifice did cause more consternation with the general public and with foreign governments, it is doubtful that it would have had much of an effect if a timely, CIA-approved army coup by Vietnamese army officers in November 1963 hadn’t dislodged President Ngo Dinh Diệm from office. He and his brother Ngo Dinh Nhu were then summarily shot.

Of course, the CIA cared little or nothing for Thích Quảng Đức’s martyrdom. Their objective, as ever, was regime change to benefit US interests.

Trần Lệ Xuân, who was then in California and who would go in lifelong exile in France, decried the deaths of her husband and brother-in-law with the statement – “No coup can erupt without American incitement and backing”.

They would pay for this “indelible stigma”, she declared. This would be just the start of their troubles in Vietnam and, thanks to them, the country would have a dreary future.

The outbreak of the Vietnam War just a few years down the line proved her right.

Previous Article
Pamban Bridge: A Historic Indian Sea Bridge That Was Built on Modern Principles
Next Article
The Seven Wonders of the Ancient World and the History Behind It