The North Sentinel Island in the Andamans is currently in the news for all the wrong reasons. Located in the Indian Ocean, this island is where the Sentinelese tribe resides, which is an ethnic group of the last uncontacted people to ever live in the world. Not wanting to establish any contact with the outside world, this secluded tribe wishes to be left alone. But what is so special about these islanders, which has suddenly put them under the spotlight, making waves across the globe?

History of the Sentinelese tribe and North Sentinel Island

Situated in the Andaman Islands, a part of the Indian union territory of Andaman and Nicobar, the North Sentinel Island lies far off in southeastern Bay of Bengal. It is roughly a small, square-shaped remote island, which is covered with dense forests and flanked by coral reefs in abundance. It is said that the Sentinelese tribe has been living on this island for more than 60,000 years, without attempting to contact the outside world ever since. Speaking their own Sentinelese language, these indigenous people are said to have descended from the Negrito race, which though are closely related to the African tribes, are quite distinct in their genetic makeup. Standing approximately five feet, five inches tall, these dark-skinned aborigines could possibly have been the first Africans to set foot on the North Sentinel Island thousands of years ago. 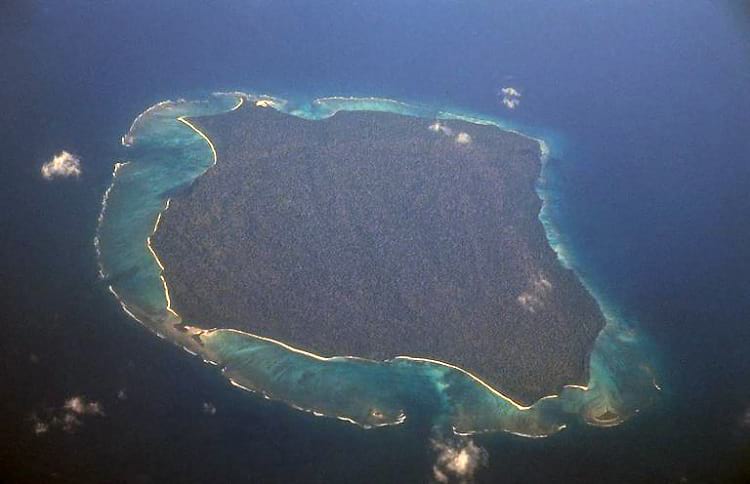 As per the Indian Government Census, the Sentinelese tribesmen are said to be an off-shoot of the more forthcoming Jarawa-Onge tribe (also from the Andaman Islands), but their self-imposed isolation over all these years indicates that they could be an ethnic group in themselves, with their own special ways and means to communicate with each other. The natives often turn hostile and turn away people, who try to make their way inside their protected land, hoping to interact with them. Still using bows and arrows to hunt and kill, it is believed that these Stone Age hunter-gatherers might surprisingly not be able to make fire till date.

The way of life of Sentinelese people

They rely heavily on fish and coconuts for food and as per government bodies that keep an eye out on them, no case of consuming human flesh has ever been reported on the island so far, implying that the Sentinelese do not practice cannibalism. They fish in the shallow waters in narrow canoes and live in houses, sizes of which depend on the number of family members. The Sentinelese make use of metals washed ashore from shipwrecks in order to make spears and tips of arrows for hunting. The women tie strings of fibre around their waist, neck and head, while men wear thicker waist belts, along with necklaces and sometimes headgears. They are even said to apply a yellow paste all over their bodies. The Jangli hut at Rutland Island, a very similar structure to that used by the Sentinelese people. (Maurice Vidal Portman / Wikimedia Commons)

Having cut themselves off from any form of foreign contact for all these years, the aboriginals are susceptible to several common viruses, including fever, cough and cold and the slightest contact from an outsider could wipe off their entire population. Since they do not allow foreigners to step on their tiny island, reacting with resentment to any possibility, the exact number of tribals actually living on the island is unclear. However, as per the Indian Census of 2011, the population of Sentinelese could be anywhere between 50 and 150.

Indian Government rules, regulations and laws regarding the Sentinelese

In the year 1967, with the help of Indian anthropologist Trilok N. Pandit, the Government of India tried to initiate contact with the Sentinelese people, offering a hand of friendship and leaving gifts for them. But they were turned away with humiliation. In 1970, an attempt to contact them was thwarted again, this time, with much hostility and embarrassment from the tribal women.

The last known contact with these indigenous people was back in 1996, after which the government left them as is. Despite being let down previously, the Government of India tried to assess their situation post the Indian Ocean tsunami of 2004 from afar, but the Coast Guards’ helicopters were shot with a volley of arrows and spears and were driven away forcefully. In 2006, two fishermen, who had inadvertently drifted too far away towards the North Sentinel Island, were killed mercilessly at the hands of this primeval ethnic tribe. 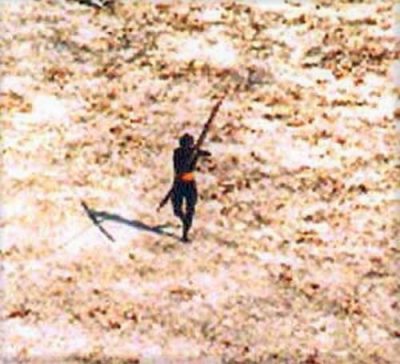 A Sentinel shooting an arrow at the helicopter. (Mr Minton / Flickr)

The Government of India has since been very particular about the Sentinelese, leaving them the way they are. The tribe is protected under the Indian law and it is a criminal offence to enter within a 5 kilometre radius of the island. The government only monitors the activities of the primitive islanders from a distance, never going too close to the island. The strict laws even necessitate a ban on tourists trying to venture far off into the North Sentinel Island, while the tribal people are never prosecuted for killing non-Sentinelese people. Under the Section 8 of The Andaman and Nicobar (Protection of Aboriginal Tribes) Regulation of 1956, and Amendment of 2012, provisions for stringent punishment, including a jail term of up to 3 and 7 years and fine have been made for exploitation of tribal communities in the Andaman and Nicobar Islands. 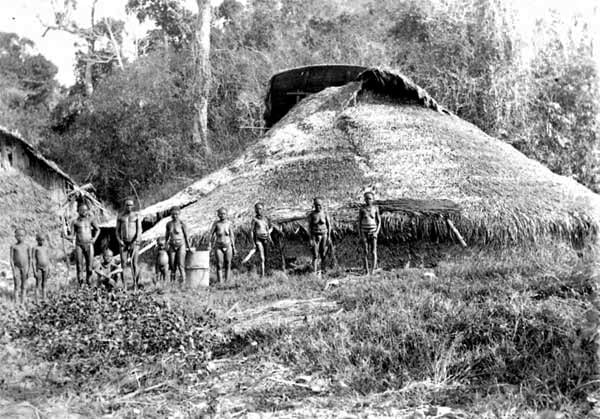 Communal huts made by Andamanese people, people of a similar indigenous ethnic group and living in the close proximity of the Sentinelese people, ca. 1886. (Edward Horace Man / Wikimedia Commons)

The recent event at the North Sentinel Island

While there have been several previous misfortunes occurring at the North Sentinel Island, with the Sentinelese tribesmen executing those trying to intrude, one incident has particularly rocked the world recently. A 26-year-old American evangelist, John Allen Chau, who wished to spread the word of God and convert the Sentinelese, visited the island thrice before he was killed with arrows, meeting a tragic end. Having visited the island before in 2015 and 2016, the interloper missionary, who was also an adventurer and international soccer coach, illegally travelled to the island, with the help of local fishermen and ventured inside, recording his entire journey, eventually getting killed by the unreceptive Sentinelese on November 22, 2018. 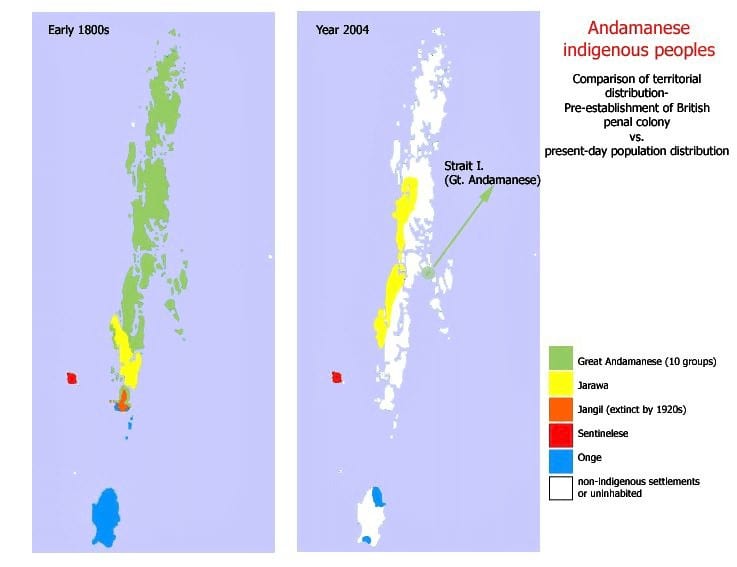 Other uncontacted tribes in the world

An NGO – Survival International – a global human rights organization formed in 1969, campaigns for the rights of the uncontacted and indigenous tribes all over the world. As per its survey, there are as many as 100 uncontacted ethnic tribes in the world, out of which 77 live in Brazil alone. A tribe from Rondonia, Brazil, has only a lone man left, who has resisted contact from the outside world. He is popularly known as the ‘Last of his Tribe’. Another uncontacted tribe is the Awa in Brazil, which is the most endangered tribe in the world due to settlers returning to colonize their land. The members of this group remain hidden most of the time during the day and hunt monkeys at night.

The few dozen people of Kawahiva make up another tribe, the members of which are constantly on the run, for fear of losing their land to deforestation and lumbering activities in their region. The native people of the Mashco-Piro tribe are hunter-gatherers who have actively shunned outside contact and live deep inside the Amazon rainforest. The tribal people from Brazil’s Acre rainforest area are nomadic people, who face severe threat of extinction due to the illegal logging businesses and the diseases the lumberjacks bring in with them. Apart from these Brazilian tribes, there are the ethnic groups of New Guinea, living in the dense jungles. Indonesia is also home to some 40 odd indigenous groups, along with some more in Congo, Botswana, and some in Peru too. 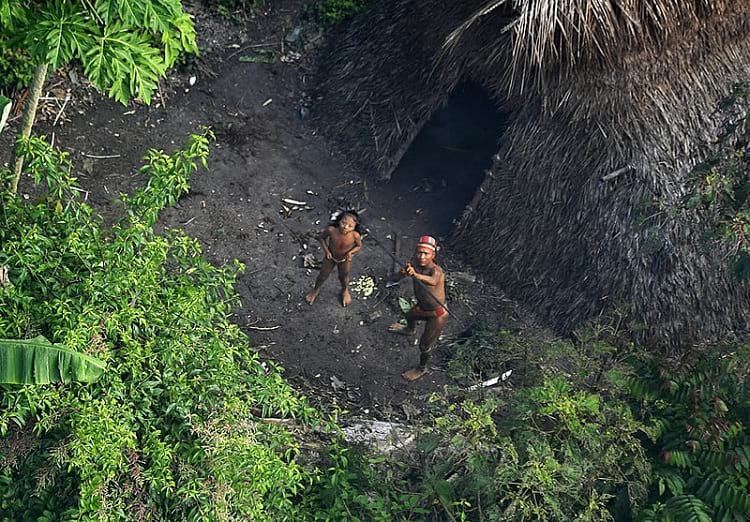 Even though the Sentinelese continue to make news headlines every day after the death of the Christian missionary, they have managed to remain untouched from the impact of modernization in the 21st century. Their seclusion and constant prehistoric ways of living baffles us and they remain a mystery and subject of great intrigue, answering our pressing questions that there still exists a world where civilizations live in ways, man left behind millenniums ago.

Recommended Watch:
A Blank in the Map | A BBC Documentary presented by Sir David Attenborough

Previous Article
A Tale of Resilience: Poon Lim, the Chinese Sailor who Survived 133 Days Castaway in the Atlantic Ocean
Next Article
Penitentes – The Remarkable Ice Pillars of the Atacama Desert