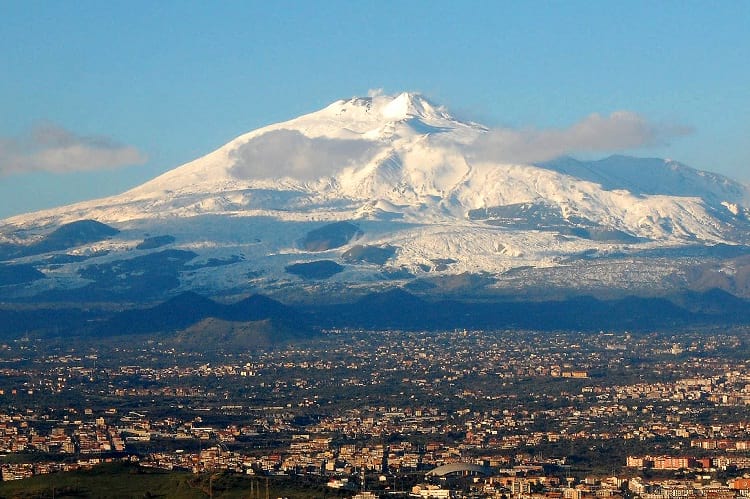 The word volcano comes from the Italian volcanic island Vulcano, named after the god of fire in Roman mythology, Vulcan. An erupting volcano spews hot lava, gases and ashes high into the air, often causing severe damage to places wherever it lands. However, Mt Etna is a safe volcano and an extremely popular tourist site. It is located near the city of Catania which lies on the east coast of the island of Sicily. The rich volcanic soil on Etna’s slopes is responsible for high agricultural productivity. Not only is it the highest mountain south of the Alps, but is also the highest active volcano in Europe attracting tourists from all over the world.

Mt Etna is 3,320 metres high, covering a total area of 1,600 square kilometres with a base circumference of 150 kilometres. The geological indicators of the volcano suggest that it has been active for over 2.6 million years. The first recorded eruption of Mt Etna is of 475 B.C. mentioned by Greek poet Pindar in “The Pythian Odes I – For Hieron of Aetna”. Rising impressively 11,000 feet above sea level, Etna is a beauty to behold, visible from nearly all of Sicily.

The spectacular eruptions of smoke rings and fiery lava have fascinated many a tourist. Smoke rings are formed when a stream of steam and gas is expelled from the crater of an active volcano, creating perfect rings in the air. These are also technically known as vortex rings. Though a rare phenomenon, Etna has pleased spectators time and again with puffs of smoke rings. During times of high activity, the volcano thrusts out steam and gas in quick succession. The build-up of immense pressure and being pushed out from a small round opening, the mouth of the crater, often results in the formation of the rings. The smoke rings sailing across the Sicilian blue skies can sometimes traverse a distance of one kilometre. These angelic halos against a pristine blue backdrop can measure up to 50 metres across and last for several minutes.

This Italian volcano has also drawn the attention of scientists all over the world. Etna boasts of three observatories dedicatedly monitoring its volcanic activities. These are based in Catania, Casa Etnea and Cantoniera. The wondrous volcano gave rise to the Etna National Park established in 1987, stretching over 581 square kilometres. Etna was declared a UNESCO World Heritage Site in the year 2013.

It is not only Sicily’s most beautiful natural attraction but also a very important revenue generator. The slopes of the volcano, with rich fertile soil, have given rise to terrace cultivation. Etna has three different ecological zones, each with its own typical plant life. The lowest slope till about 3,000 feet in height is covered with vineyards, citrus plantations, orchards of apples and olives. The zone above is covered with groves of chestnut, hazelnut, almonds, pistachios, oak, pine, birch etc. Above the height of 6,500 feet, the mountain sustains a few plants and flowers like the Etna violet, Etna camomile and Etna ragwort. The most characteristic plant in this zone is the Astragalus aetnensis, locally known as the ‘spinosanto’ (holy spine).

The volcanic lava flowing down the mountain over the years has carved out more than 200 natural caves. These are now used as wine cellars or cold food storage. The most outstanding feature of the volcano is the natural horseshoe-shaped caldera on the eastern slope, Valle del Bove or the Bove Valley. The volcano has 4 distinct active craters at the summit. Bocca Nuova (BN) and Voragine (VOR), two craters that are a part of the oldest original Central Crater. The other two are fairly new craters; the North East Crater (NEC) which formed in 1911, and the South East Crater (SEC) having formed in 1971.

The most popularly visited is the extinct ‘crateri silvestri‘ which happens to lie on the southern side of the Etna, near the village of Nicolosi. The radiant lava can be seen from here during Strombolian eruptions. A sight to behold is the glowing lava at night, looking like the red flood, visible from a safe distance from the villages around Etna. Closer to the summit, it is possible to visit the active side craters. Tourist guides will take you close enough to witness the steaming craters where you can feel the warmth of the rocks around, due to volcanic activity. In the months of winter, Etna also has a cover of snow at the top. These natural phenomenons make for a unique experience of skiing on the slopes with an astounding view of the Ionian Sea.

The Etna National Park also offers hikes and nature walks through the park leading to the higher altitudes of the volcano. The walks take you through the vineyards, the orchards and the wood forests, displaying the amazing biodiversity of the legendary mountain. One can witness the mesmerising lunar landscape near the craters, visit the lava caves, and the active fumaroles which emit steam and fumes from time to time.

Mt Etna has been known to be active for several centuries now with Strombolian eruptions spewing ash, glowing cinder and lava fountains to a few metres high. These relatively mild blasts are the most attractive feature of Etna, almost like a fireworks display on a large scale. The most recent activity of Etna took place from October 15 to October 21, 2018. According to a report by Sezione di Catania – Osservatorio Etneo (INGV), there were gas emissions from the craters at the summit with intermittent Strombolian activity. 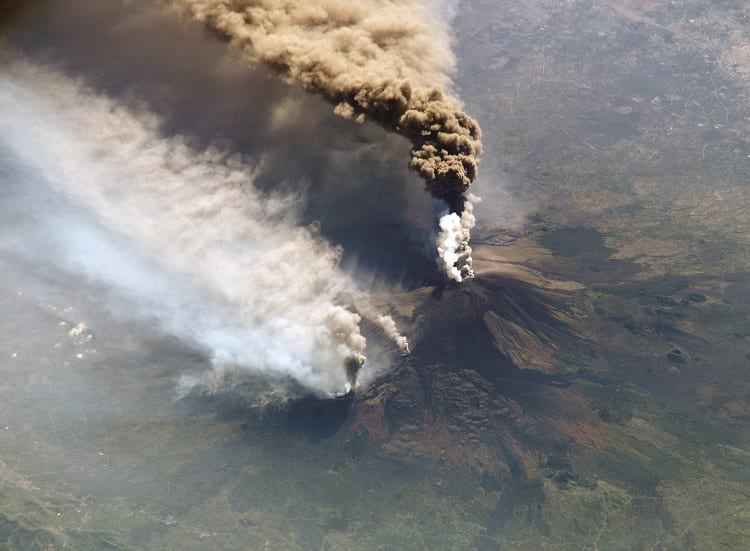 Photo of Mount Etna from International Space Station during an eruption. (NASA)

Scottish traveller and author Patrick Brydone described the beauty of Mt Etna in his immensely popular travel book ‘A Tour through Sicily and Malta, in a series of letters to William Beckford Esq. of Somerley in Suffolk’, published in 1806. He very aptly said, “….. if Mount Etna inside looks like hell, we can rightly say that, outside,  it is the nearest thing to Paradise”.

Previous Article
The Egyptian Vultures of Tamil Nadu’s Vedagiriswarar Temple
Next Article
The Lonely House on Ellidaey Island, Where Nobody is Sure of its Residents