Tristan da Cunha: The Remotest Inhabited Island in the World There are some remarkable regions on earth that, despite our multi-connected world, remain more or less untouched. One such place is Tristan da Cunha. Located in the South Atlantic Ocean, it is one of the remotest inhabited islands in the world and belongs to a group of six volcanic islands that are collectively known as the Tristan da Cunha Islands. 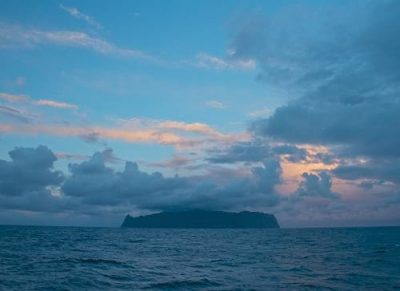 Ever wondered what it might be like to live far away from civilization as we know it in the middle of a vast ocean? The two hundred plus population of Tristan da Cunha would tell you that it can be tough, with few modern conveniences, but, even so, they would never swap their island life for anything else. They tried it once from 1961 to 1963 and discovered that the outer world cannot hold a candle to Tristan da Cunha.

Edmund Roberts, a 19th century visitor to Tristan da Cunha, on first sighting the island, described how its towering snow-clad mountains lit up in the morning sunlight. Add an emerald green landscape to the picture and you have one of the most beautiful islands on Earth.

Present-day visitors are left similarly awestruck. Even with the homes and structures that make up the island’s only settlement, the place still retains its air of pristine seclusion.

Tristan da Cunha, the principal and only inhabited island, has a main city known as the ‘Edinburgh of the Seven Seas’. It is named after Prince Albert, Duke of Edinburgh, and Queen Victoria’s second son, who visited the island in 1867. The island is more or less circular in shape, with a width of 6 miles, a land area of 38 square miles, and a coastline of 21 miles. There is an active volcano called Queen Mary’s Peak on the island. It was after its eruption in 1961 that the islanders were forced to abandon their homes and head for the United Kingdom. It hasn’t erupted since then.

The Portuguese shipman, Tristão da Cunha, first came upon the island in 1506 but was unable to set foot due to bad weather and accessibility difficulties. The island seems to have sufficiently impressed him to make him name it after himself, Ilha de Tristão da Cunha. It was later mentioned by this name in British Admiralty charts before being Anglicized to Tristan da Cunha. 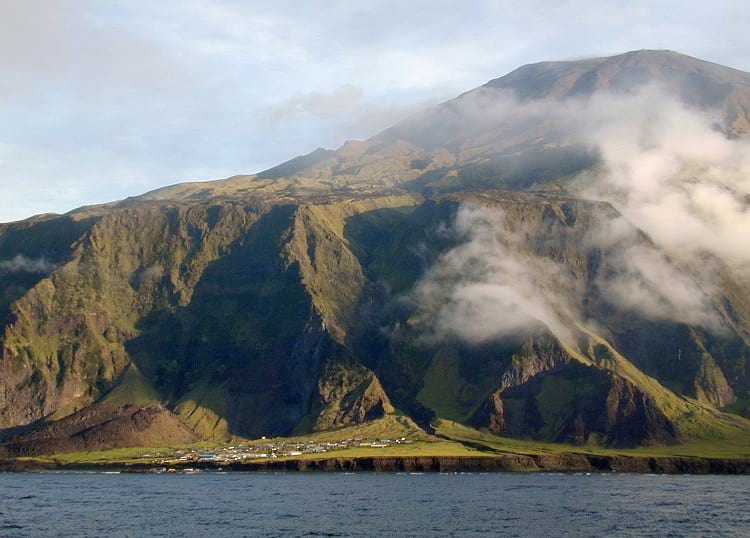 The main settlements on the remote island. (The Official CTBTO Photostream / Flickr)

In 1520, the Portuguese vessel Lás Rafael, under Captain Ruy Vaz Pereira, stopped at Tristan da Cunha to replenish their water. This would make the Portuguese sailors the first men to set foot on the island. The account is, however, disputed, and a Dutch East India Company ship, the Heemstede, takes official credit for being the first to send men to the island.

On 7 February 1643, the Heemstede, captained by Claes Gerritsz Bierenbroodspot, landed her crew on Tristan da Cunha. The Dutch visited the island four more times for supplies in the next 25 years. They understood the lay of the archipelago from their visits and, in 1656, drew up a rough map of it.

A more thorough charting of the archipelago came about a hundred years later in 1757 when the Heure du Berger, a French corvette, sent its crew to survey the land. Another Frenchman, Louis-Marie Aubert du Petit-Thouars, was the first to study the natural environment of Tristan da Cunha in January 1793.

The first person to live permanently on the island was Jonathan Lambert of Salem, Massachusetts, United States. He and two other men moved to Tristan da Cunha in December 1810 to start a business selling supplies to passing ships. A third fellow joined them later. Declaring the islands to be his property, Lambert renamed them the Islands of Refreshment. The new name didn’t catch on and Lambert didn’t remain an island owner for too long. Just two years after their arrival, Lambert and two of the men died in a fishing accident. The fourth man, Tommaso Corri, remained alone on the island and wasn’t discovered until a ship stopped by several years afterwards. They offered to take him off the island, but he decided to remain and farm on the island. Facilities are mainly confined to the village and the settlement plain. The most recent additions have been street lighting and solar energy panels. In 1813, the United Kingdom claimed the islands as part of its empire and annexed them in 1816, making them a dependency of the Cape Colony in South Africa. They explained this as a measure to prevent the islands from being used as a base by French Nationalists who wanted to free Napoleon Bonaparte from his imprisonment on Saint Helena. The British occupation was also to prevent the United States from claiming the islands. The United States had used Trista da Cunha as a naval base during their 1812 war against the United Kingdom.

The British stationed a garrison of marines on the island and, soon, a civilian population settled there, numbering in 25 by 1824, with three women and 22 men. US American whalers began using the island as a base for their whaling ventures in the South Atlantic. By 1856, with the addition of drifters and shipwreck survivors, the island’s population grew to 71.

For a while it seemed that the islands might become fully inhabited, but, in 1857, the majority left the island to avoid starvation, leaving on 28 die-hard souls behind. Things deteriorated further in 1869. This was when the Suez Canal opened and, around the same time, coal-powered ships began replacing sailing ships. Seafarers no longer needed to take the long, slow route around the islands from Europe to East Asia or stop at Tristan da Cunha for supplies. As a result, the island soon slipped back into isolation.

When Captain Geroge Nares and his ship, HMS Challenger, visited Tristan da Cunha on a geographic survey mission in 1873, the island’s population consisted of 15 families.

As the islands no longer mattered as a strategic stopover, the UK withdrew its marines and asked the people to evacuate the island as well, warning them they would be on their own if they remained. The people decided to stay despite that. They were virtually cut off from the world from 1909 to 1919. In 1919, a ship stopped by to inform them about what had happened during World War I.

During World War II, there were RAF and Royal Navy posts on the island as a deterrence against German U-boats.

Today, the entire population of Tristan da Cunha is under 300, and these people are descendants of the original settlers. They are a mix of Caucasian, African, and Asian descent, speak English and have only seven surnames.

The principal occupation is farming, with the locals working on communally-owned land and in settlement gardens. They grow potatoes and other crops and maintain cattle. The number of cattle is strictly regulated to prevent over-grazing and also so that some families don’t become wealthier than others. The community operates on the principles of equality as established by William Glass, the founder of the settlement. 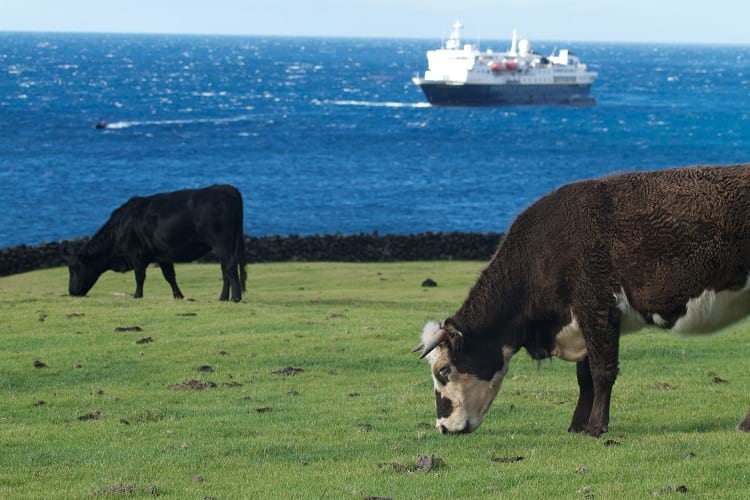 Cows grazing on the island. Each family is restricted to keeping not more than two cows. (Brian Gratwicke / Flickr)

The island does not allow outsiders to buy land on it or to settle on it. Visitors can stay only for short durations. The local council governs the island. There four policemen in the community. The Islanders have one unofficial representative in Birmingham.

At present, the settlement has a school, a post office, a museum, churches of the Anglican and Roman Catholic denominations, and a crayfish canning factory. There is a hospital with one doctor. Other medical professionals visit a few times in a year and stay for a few weeks or months. For more in-depth medical consultations, the doctor consults other doctors over the internet. In emergencies, they ferry patients all the way over to Cape Town. They get their electricity from diesel generators and store the diesel in nine 200,000 litres tanks. There is one local bus and a few cars. The single main road that the locals call the MH1 goes from the settlement to the potato patches. The other ‘roads’ on the island are paths, some of them quite precarious ones.

The Islanders had to evacuate Tristan da Cunha after Queen Mary’s Peak erupted in 1961 and made the settlement inhabitable. The British government resettled the Islanders in England to a great deal of media attention. The island evacuees, however, didn’t like it in England and found it difficult to adjust to modern life, both from having a different dialect and a different way of living. They voted to return to Tristan da Cunha when it became safe to do so in 1963. Except for three people, everyone returned. They did this in two stages, the works returning first to assess the damage and make the repairs and the rest following afterwards. A few years later, 35 people left for Europe. For the most part though, the people of Tristan da Cunha love their island and have no intention of ever leaving. After they returned, they renamed a port Calshot Harbour after the village they had stayed in in the UK.

The Tristan da Cunha has two species of land birds and 13 species of seabirds. These include the Antarctic Terns, the Tristan Wandering albatross, the Yellow-nosed albatross, the sooty albatross, the Inaccessible Island flightless rail, and the Atlantic Petrel; the latter only breeds on these islands. There are also Northern rockhopper penguins and the Sub-Antarctic fur seals. 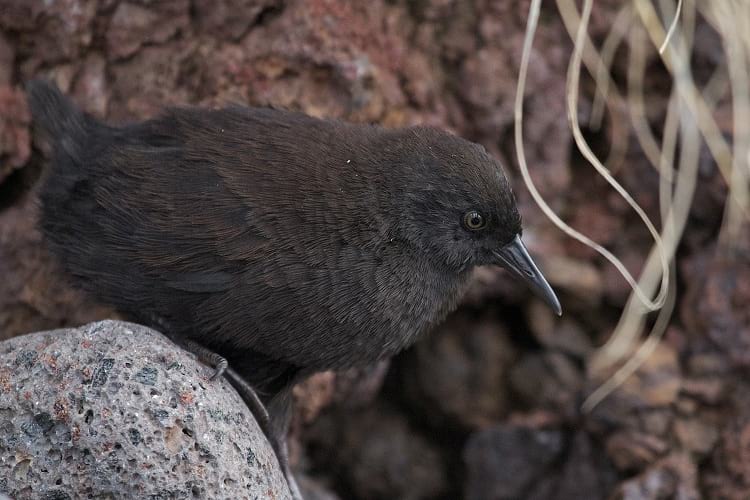 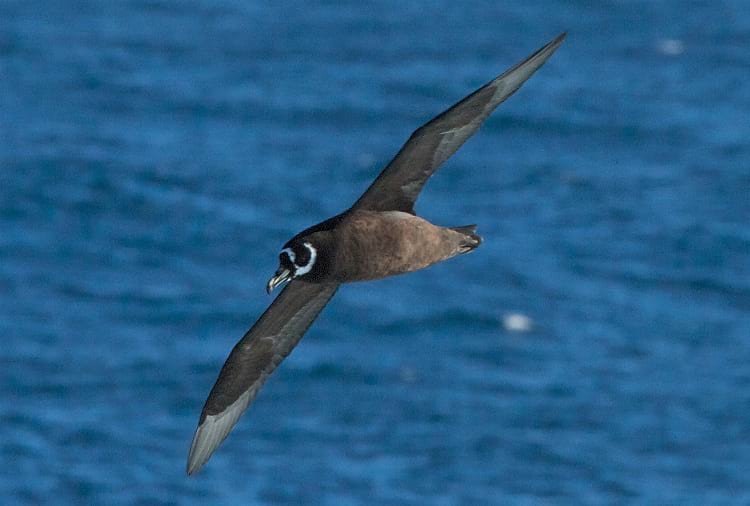 You don’t require a visa for Tristan da Cunha, just prior permission from the island Administration and Council. You can get this by contacting them via email and informing them when you plan to visit, why you want to visit, and for how long you want to stay. They will issue you a landing stamp on your passport.

However, actually getting to the island can be difficult. Tristan da Cunha does not have an airstrip, so you can’t reach it by plane. The only way to go there is by boat or ship and that can take six days from Cape Town. However, regular ships head for Tristan da Cunha rather infrequently, about only five or six times a year. Cruise ships stopover in December. Fishing vessels may make more frequent trips.

Enjoyed this article? Also, check out “Kerguelen Islands: The Remotest Place on Earth“.

Special thanks to Brian Gratwicke for releasing all the photos of the island in creative commons.

Previous Article
The Extraordinary Journey of the Stone of Scone and the Imperial Coronation Chair
Next Article
China’s ‘One Belt, One Road’ – The Economic Project That Might Reshape the World