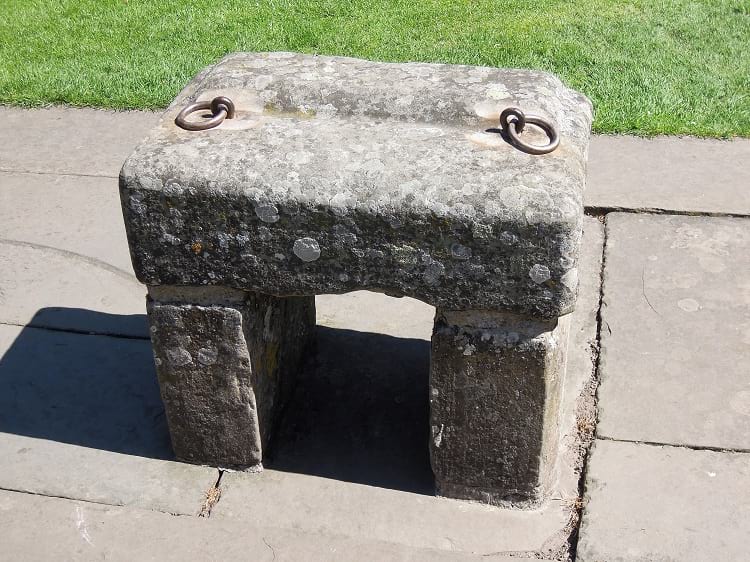 Replica of the Stone of Scone. (Aaron Bradley / Flickr)

There are several coronation thrones/chairs across the world. Two of the imperial chairs, i.e. the Sun Throne and the Naderi Throne, belong to Persia (Iran) of the late 18th century. But, the most famous imperial coronation chair, Stone of Scone, belonged to the English kingdoms for over 700 years.

The ancient chair was used during Coronation ceremonies of kings and queens of the English since the beginning of the 14th century.

Placed in St George’s Chapel at Westminster Abbey in London, the Coronation Chair is a beautiful piece of furniture. King Edward I got the imperial oak chair made in 1300 for the purpose of putting the Stone of Scone under it. The king is believed to have plundered Scotland and brought the Stone of Scone in 1296 to England. He told the Abbot of Westminster to ensure full care for the stone. The stone weighing 152 kg is believed to be composed of sandstone.

The magnificent imperial chair was decorated with patterns of animals, foliage and birds. The king’s figure, either that of Edward I or Edward the Confessor, was painted on the chair’s back. The Stone of Scone was placed under the seat. Some of those who were coroneted on the chair include William III and Mary II (1689), Oliver Cromwell, and Queen Victoria in 1887.

Read more: The Strange Case of Emperor Norton, the Self-Anointed Monarch of the United States

To protect the ancient treasures from heavy bombing during World War II, the chair was shifted to Gloucester Cathedral, while the stone was buried secretly inside the Abbey.

For several centuries, the ancient chair was placed inside the Chapel of St Edward the Confessor. But when the chapel was shut down in 1997, it was shifted and placed on a modern pedestal close to Henry V’s tomb.

During 2010, important conservation work was carried out on the chair with the help of the Hamilton Kerr Institute. However, if rumours are to be believed, the original coronation chair went missing in the 18th century itself.

Legends of the Stone of Scone

According to one legend, Jacob rested his head on the stone at Bethel. There is a reference to the stone in the Genesis. In chapter 28 and verse 18, Jacob used the stone as a pillow.

Another legend says the sons of Jacob took the stone to Egypt. From there, it was believed to have passed on to Spain’s King Gathelus. At about 700 BC, the stone was found in Ireland, where it was kept on a sacred place called Hill of Tara.

The Celtic named the stone as “Lia-Fail”, meaning the “stone of destiny” or the “fatal” stone. Legend says during coronation ceremonies when the Irish kings sat on it the stone released a loud creaking sound.

Founder of the Scottish monarchy

The founder of the Scottish monarchy, Fergus Mor MacEirc received the coronation stone. He was of the royal blood of Ireland. Another king of Scotland, Kenneth MacAlpin is believed to have shifted the stone to the monastery of Scone in Perthshire. All these Scottish rulers were known as the kings of Dalriada.

Therefore, for Scottish people, the stone is an object of veneration. As such, it remained the coronation stone since late 5th century till 1292 AD. All Scottish kings were enthroned on the Stone of Scone atop Moot Hill palace located in a place called Perthshire.

There are no carvings on the megalith stone. It is an oblong block of red sandstone. It measures 400 mm in width and 650 mm in length and is 27 mm depth. There are some chisel marks on it.

On December 25, 1950, Scottish Nationalists are said to have stolen the Stone of Scone. However, in April the following year, authorities recovered it and safely deposited it a vault. Since then the coronation chair and the stone existed separately. 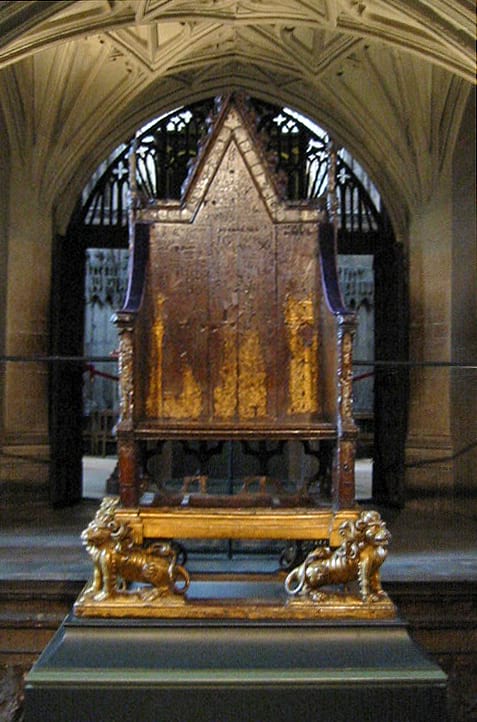 The coronation chair without the stone of scone. (Kjetil Bjørnsrud / Wikimedia Commons)

The UK returns Stone of Scone to Scotland

In a surprise announcement on July 3 of 1996, British Prime Minister John Major declared the Stone of Scone will return to Scotland by that year-end. As promised the stone was handed over to representatives of Historic Scotland on November 13, 1996.

The Stone of Scone was placed in the Edinburgh Castle. With the result, the Coronation Chair today survives without the stone.

According to a legend, when King Edward I of England hammered the Scots in 1296, the monks of Scone had hidden the original stone. The king is believed to have taken a duplicate stone to London.

On display at Edinburgh Castle

A recent myth says the 700-year-old belief that the English monarchs sat on a chair beneath which there was the stone during the coronation is false. In fact, the oak wood seat came much later.

From what we understand till now is that the stone is currently on display at the Edinburgh Castle and it is the pride of Scotland.

Enjoyed this article? Also, check out “The Strange Case of Emperor Norton, the Self-Anointed Monarch of the United States“.

Previous Article
Voyager Golden Records: A Package for the Extraterrestrial from Planet Earth
Next Article
Tristan da Cunha: The Remotest Inhabited Island in the World