The Clermont-Ferrand Cathedral: A Beautiful Gothic Structure Made of Black Lava Stone The Clermont-Ferrand Cathedral, or the Cathédrale Notre-Dame-de-l’Assomption, looks like something out of a dark fairytale. The dark looming structure of this Gothic Cathedral, with its windows ablaze from the stunning medieval stained glass, stands atop a hill and cuts an iconic visage. Built through the 13th and 14th centuries, the Clermont-Ferrand Cathedral is the French National Monument and the seat of the Archbishops of Clermont.

At length it is in known as Cathedral of Our Lady of the Assumption of Clermont-Ferrand. (Fabien1309/Wikimedia Commons)

The Clermont-Ferrand Cathedral is built entirely using black lava stone and in the Gothic style of architecture. The Cathedral’s twin spires rise to an astounding height of 96.1 meters and overlook the largest dormant volcano of the surrounding range, the Puy-de-Dôme.

The ginormous steeples are perhaps the most dominating feature of not only the cathedral, but the entire town. The Clermont-Ferrand Cathedral also houses a 10th Century crypt, which is the oldest section of the cathedral. Besides the stunning medieval glass painting on the windows that depict the saints and their rise to martyrdom, the complex contains a vast number of Gothic wall paintings which are some best preserved medieval frescoes. 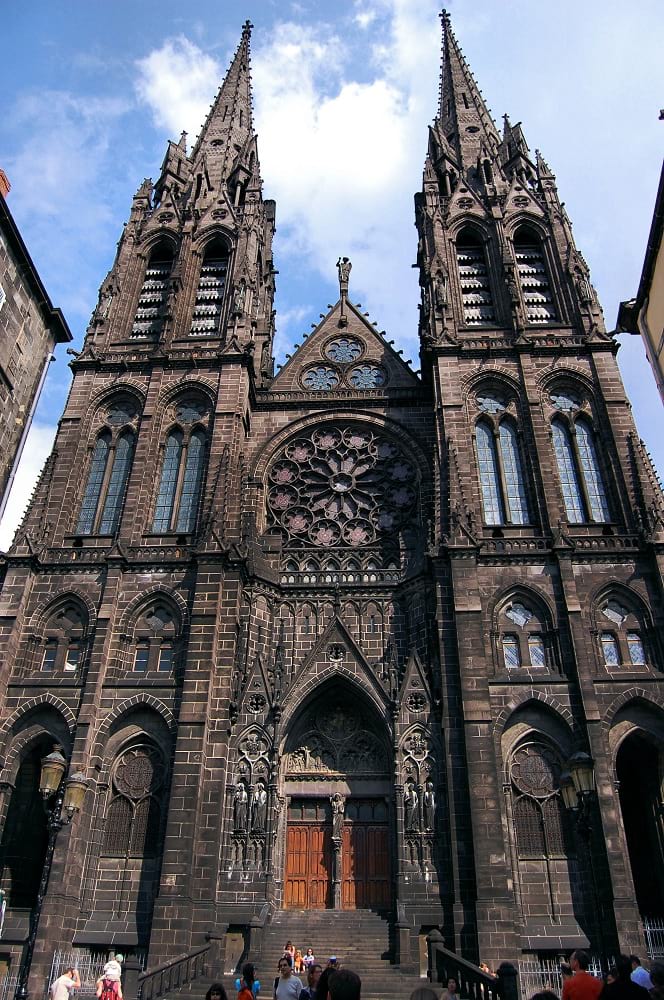 Side view of the cathedral. (jean-louis Zimmermann/Flickr)

The nave of the Cathedral is surrounded by columns made of the same black lava stone, lending a sombre atmosphere within. The light through the stained windows pouring into the black cathedral interiors creates a mesmerising chiaroscuro effect. The black stone ceiling soars to 30 metres. An intricate 16th century clock housed within adds another point of interest. The clock chimes as the automatons of the two Roman gods Mars and Faunus beat the head of Saturn, the elderly Lord of Time.

The exterior facade of the Clermont-Ferrand Cathedral displays the quintessential Gargoyles which are integral to cathedral architecture. These Gargoyles help with drainage by pouring out accumulated water through their gaping mouths in case of heavy rain. Next to the Cathedral complex lies the Place de la Victoire, which exhibits the statue of Pope Urban II.

The Clermont-Ferrand Cathedral, interestingly, is not the only cathedral to have stood on the spot. The building was in fact built atop the remnants of two previous structures. The crypt housed within the Cathedral, as well as various other vestiges of the previous churches, has been seamlessly incorporated into the foundation and structure of the Cathedral. Constructions for the Clermont-Ferrand Cathedral began in 1248, but it was not officially completed until 1908. The Hundred Years’ War (1337-1453) and the French Revolution (1789-1799), and both their far-reaching repercussions hindered the construction process. The completion process could only begin as late as 1866. 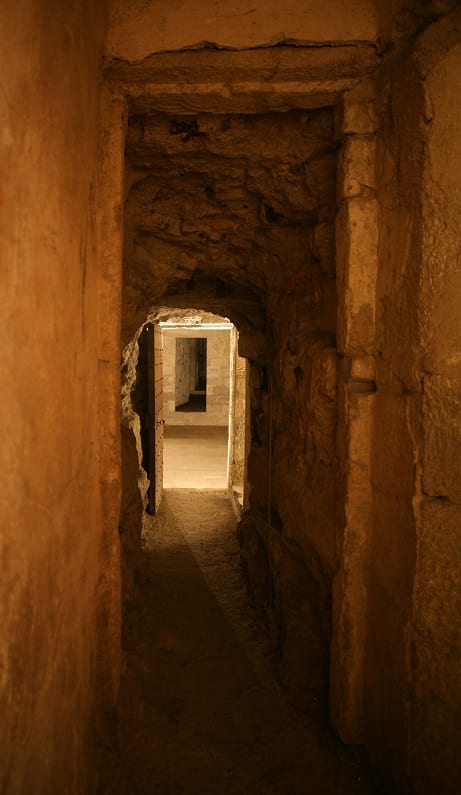 The crypt inside Clermont-Ferrand Cathedral was discovered in 1885. (L.Falchero/Le Duc)

The construction of the existent facade of the Clermont-Ferrand Cathedral started in 1246, under the episcopacy of Bishop Hugues de la Tour. A friend of the contemporary monarch King Louis IX, Bishop Hagues was a man of eminence and affluence. The prominent Gothic style of cathedrals from northern France inspired the structure of the Cathedral. Designed by the architect Jean Deschamps, the impact of the cathedrals at Beauvais and Amiens are significant in the designs of the Clermont-Ferrand. Deschamps’ plans did not involve any bracing arches, and the windows were not to take up all the space between the supports. The ribs of the structure drove into the arches, while the flying buttresses projected into the aisles of the Cathedral’s nave. The pillars of the choir-rotunda ingeniously created an elliptical so the light could filter in through the apsidal windows into the sanctuary. Both the choir and the transept of the Clermont-Ferrand Cathedral were completed under the Deschamps’ supervision before the architect finally passed away in 1295. 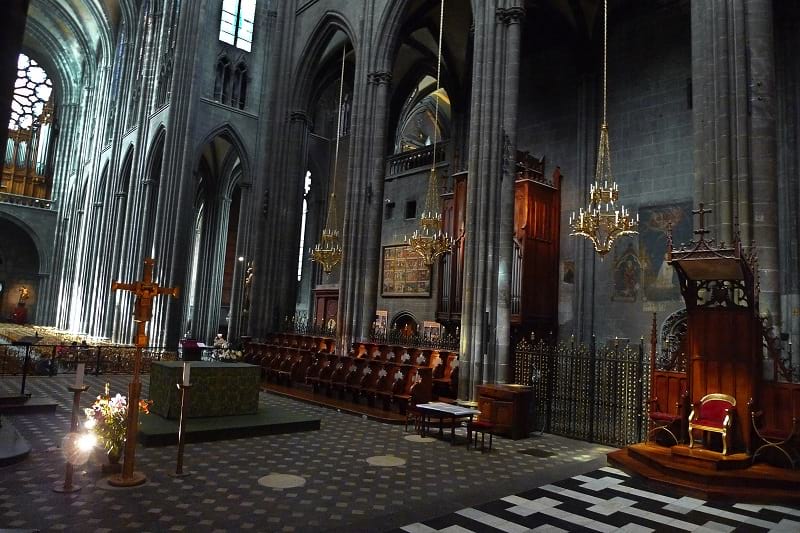 While its construction was deferred, the Cathedral complex was spared extensive damage during the French Revolution owing to the pleas of a very diplomatic clergyman, Benedictine Verdier-Latour, who argued that the building could serve the people as a gathering spot. He swayed public opinion and the basic structure of the Clermont-Ferrand Cathedral stood the test of time, although its altar, choir, rood screen, and furniture faced the ravages of the Revolution.

Previous Article
How Trump’s Phony War with Twitter is Going to Affect the Internet
Next Article
Wan Hu- The First Astronaut Propelled Into Outer Space?