If you visit a busy intersection near the Mahatma Gandhi Road in Junagadh, you will come across the eye-catching architectural marvel known as the Mahabat Maqbara. It is a mausoleum of the sixth Nawab of the erstwhile princely state of Junagadh and one of his high-placed courtiers. However, unlike India’s most famous mausoleum, the Taj Mahal, few people in India or abroad have heard of the Mahabat Maqbara. That ought to change.

The Mahabat Maqbara is a mausoleum complex that comprises of two structures—the imposing Mahabat Maqbara, which was built above the tomb of Nawab Mahabat Khan II of Junagadh, who ruled from 1851 to 1882, and the fantastically eccentric tomb of his Wazir, Bahar-ud-din Bhar Hasainbhai.

Nawab Mahabat Khan II began construction the complex in 1878. The building work of the Mahabat Maqbara took 14 years and was completed by the Nawab’s successor, Nawab Bahadur Khanji in 1892. The tomb of Bahar-ud-din Bhar was completed in 1896. A brief history of Junagadh

To understand how the Mahabat Maqbara came to be built, let us first take a look at the social and political background of Junagadh. For centuries, the region was under the rule of various medieval dynasties. It became an independent kingdom in 1748, after Mohammad Sher Khan Babi, a Pashtun adventurer from Afghanistan, decided he didn’t want to be a Mughal vassal any longer. He threw over his allegiance to the Mughal governor of the Gujarat subah and declared himself as the ruler of Junagadh. He began ruling over the newly-found kingdom as Nawab Muhammad Bahadur Khanji.

It was the beginning of the Babi Dynasty that ruled over Junagadh until the independence of India in 1947.

However, they did not take over the direct administration of the state or of the other princely states in the Saurashtra region of Gujarat but were content to let the Nawabs remain on the throne and rule on their behalf. The subsequent Nawabs of Junagadh became dyed-in-the-wool Anglophiles, adopted European mannerisms, and attempted to incorporate European architecture in the buildings they built.

After the partition of India in 1947, the princely states in the subcontinent were asked to join either India or Pakistan. The 10th and very popular Nawab of Junagadh, Nawab Muhammad Mahabat Khanji III Rasul Khanji, was holidaying in Europe at the time of independence, leaving his Diwan, Shah Nawaz Bhutto, to rule in his absence. Shah Nawaz Bhutto—father of Zulfiqar Ali Bhutto and grandfather of Benazir Bhutto, both of whom served as prime ministers of Pakistan—was inclined towards Mohammad Ali Jinnah, and, on his return from Europe, persuaded the Nawab to accede to Pakistan. 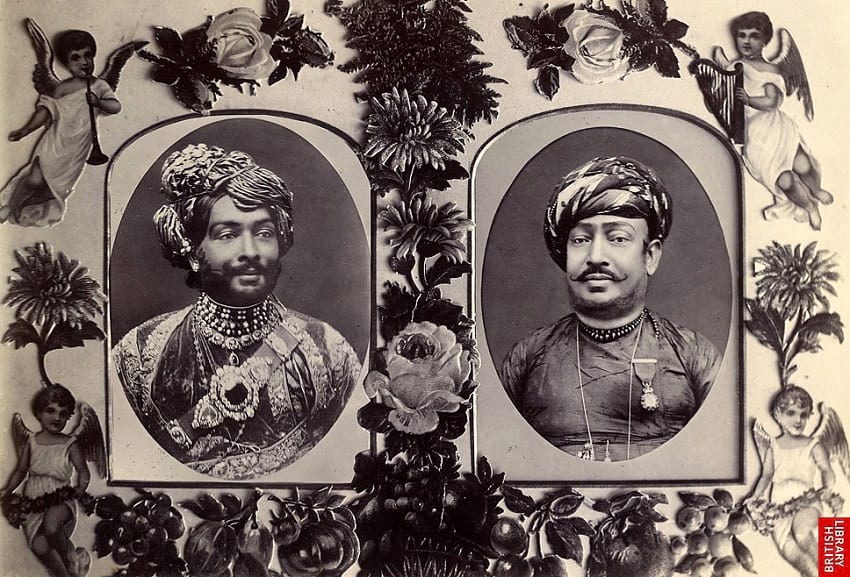 The Nawab sent an emissary to meet Jinnah on 11 August 1947 and announced the accession on 15 September 1947. The Indian side took exception and pointed out that the state had no common boundary with Pakistan. To this, the Nawab replied that there was a sea route to Pakistan. Unfortunately for him, the predominantly Hindu population of Junagadh also took exception to join Pakistan and revolted. They insisted on holding a plebiscite, and the results showed that the majority of the citizens wanted to join India.

When the Nawab of Junagadh refused and used military force to prevent his vassal principalities, Babariawad and Mangrol, from acceding to India, Sardar Vallabhbhai, the new Deputy Prime Minister of India, sent the Indian Army to seize the territories. The Nawab and his Diwan fled to Pakistan, and Junagadh became part of India.

The architectural specialities of the Mahabat Maqbara

Islamic and European influences shaped the outlook of the Nawabs of Junagadh, and nowhere is this more evident than in the architecture of the Mahabat Maqbara.

While the external and internal structures of the Mahabat Maqbara are clearly Islamic, they are also replete with distinctive Gothic architectural flourishes. Nawab Mahabat Khan II was an admirer of European architecture and the Gothic style was in vogue in Europe when he began building the Mahabat Maqbara. Since he wanted the buildings to exceed the best in Europe, he insisted on a blend of Islamic and Gothic architectural styles. 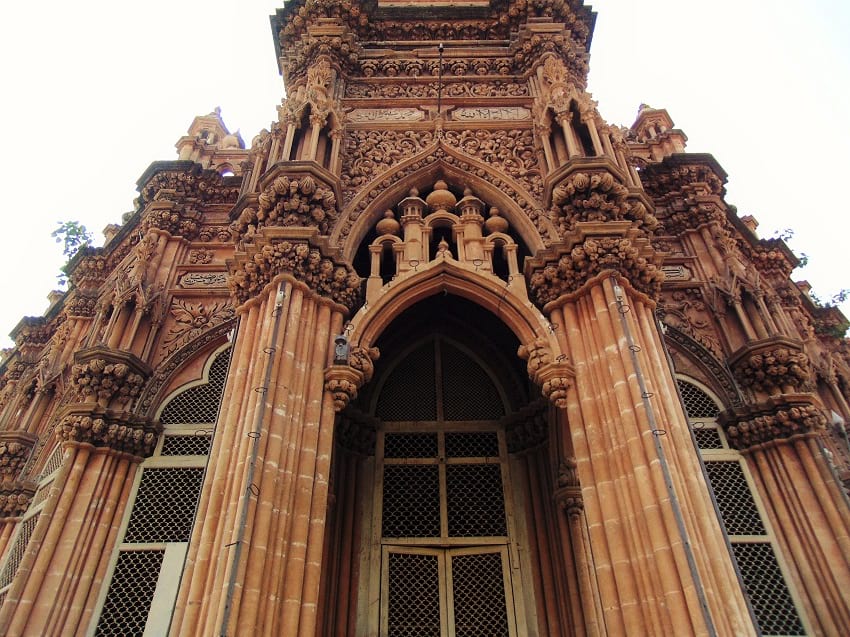 The result is quite astounding and awe-inspiring. Even though it is located on a busy intersection, the Mahabat Maqbara complex manages to stand out and make a powerful statement of eccentricity. Both the structures of the Mahabat Maqbara have stately onion domes and attractive silver doors and windows.

The tomb of Nawab Mahabat Khan II has a large onion dome at the top and is surrounded by a cluster of smaller onion domes. There are elaborate carvings on its outer facade as well as on its interior. There are decorative arches and Gothic columns and windows in the French style.

Wazir Bahar-ud-din Bhar Hasainbhai’s tomb has three large onion domes and exterior decorative flourishes. A short flight of steps leads up to a large, Islamic-style door. The structure is surrounded by four minarets, and each of these minarets is encircled from top to bottom with winding staircases on the outside. These add to the unique architectural features of the Mahabat Maqbara complex and are probably the only minars in the country with external stairways. Most minars in India—such as the Qutub Minar—have stairs on the inside.

The current state of the Mahabat Maqbara

After Junagadh became an Indian state, the Mahabat Maqbara and many other heritage buildings came under the purview of the Archaeological Survey of India. It is, therefore, an officially protected building. 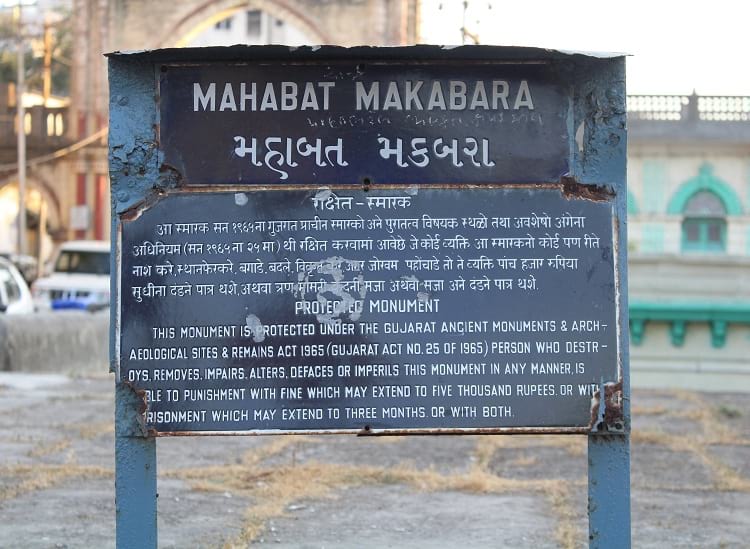 A sign by the Archaeological Survey of India. (Subham Chaurasia 1998 / Wikimedia Commons)

Unfortunately, however, the Indian authorities have not been doing enough to actively protect and maintain the Mahabat Maqbara. The complex is, at present, in a sad state of neglect, with grass and plants growing on the structures. Some sections of the buildings are crumbling away, and others are held together tenuously with rusted wires. The window glasses are broken, and birds have nested inside, and the floodlights outside are damaged.

It is possible to go inside and get an idea of the former grandeur. Hopefully, the Indian government and the Archaeological Survey of India will step up to save, renovate, and restore this architecturally unique monument before it is too late.

Enjoyed this article? Also, check out “Tomb of Bibi Jawindi“.

Previous Article
The Newby-McMahon Building: A Four-Storey Building That Is ‘the World’s Littlest Skyscraper’
Next Article
Nemo 33: Swimming Pool with Oceanic and Underwater Cave Simulations