The Newby-McMahon Building: A Four-Storey Building That Is ‘the World’s Littlest Skyscraper’

Normally when one thinks of a skyscraper, it is typically assumed that it would be a massive structure- standing tall and covering a large area. In a little town in Texas, called Wichita Falls, a man named J.D McMahon had promised to build a skyscraper and procured some sizeable funding from investors for the same. Little did they know that the skyscraper- the Newby-McMahon Building- would not actually be a ‘skyscraper’, barely providing the amount of office space it needed to.

Growth in the economy encouraged the townspeople to believe in the construction of the skyscraper. The project proposal in 1919 met with next to no negativity, and investors raced to make themselves a part of the game plan that J.D McMahon had put forth. Entirely unaware, they would all be duped and would eventually witness the construction of the world’s littlest skyscraper. 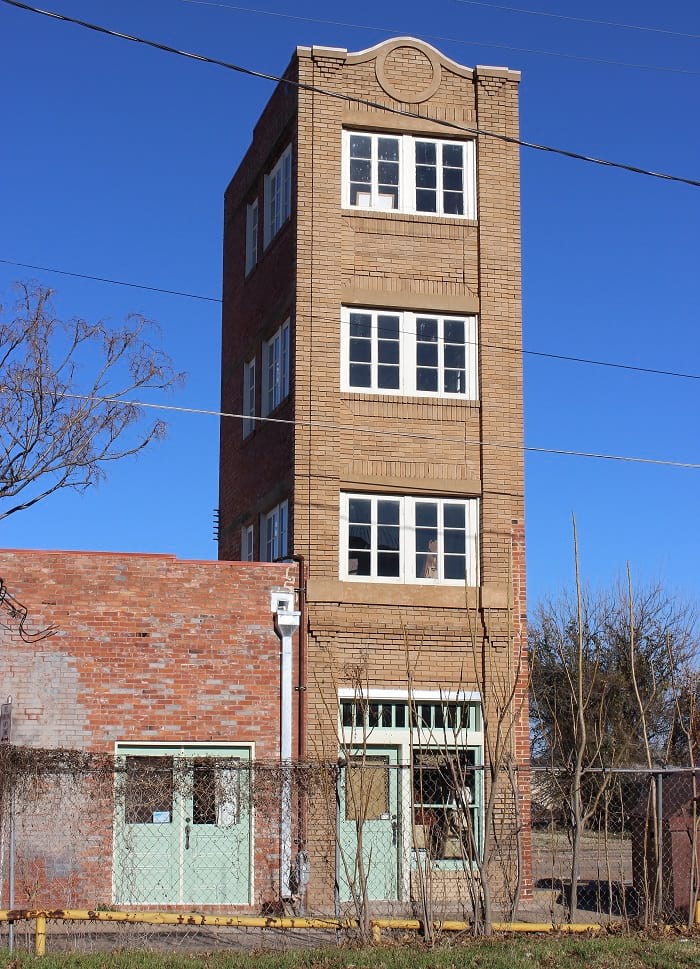 A massive boom in the industry hit the town of Wichita in the 1900s upon the discovery of a petroleum reservoir, which led to a sporadic population explosion, ultimately resulting in an increase in the workforce. McMahon was not the first to propose the idea of constructing an office space for the rapidly growing industry. Earlier in 1906, Augustus Newby, a railwayman had successfully constructed a one-story building that was used as an office space. It was around the corner at the end of a street named “Seventh and La Salle”. However, the Newby building proved to be inadequate to house the workforce it needed to, and had to be reconstructed to accommodate the need for more office space. A one-story building would not be enough for the massive workforce that had moved into the town.

The idea of a skyscraper in a little town with a mere investment of $200,000 amused investors, but they rushed in to be a part of the project nonetheless. J.D. McMahon was the owner of an oil construction company whose office was in a one-story brick building on the corner of Seventh and La Salle. He then came up with the idea of building a skyscraper in the empty plot next to his office. During the expansion, he had, incidentally, taken no permission from the landowner of the lot and used his own company to build the skyscraper. Little did the investors know that the skyscraper — or so it was called, was just a four-story building. The investors had been successfully duped out of their money by McMahon. 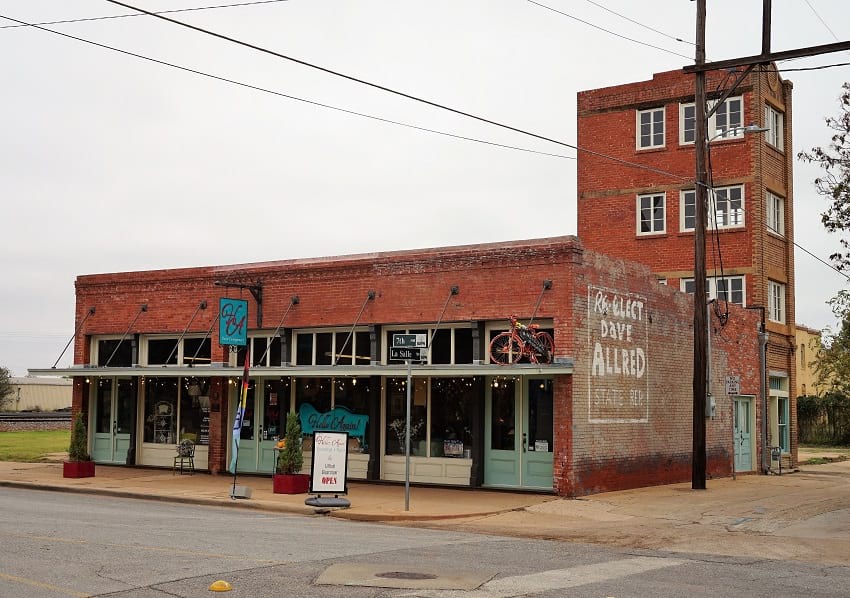 The one-story building next to the Newby-McMahon Building. (Michael Barera / Wikimedia Commons)

How exactly he got investors to sign on papers is another story altogether. Very few people actually pay attention to detail, and as it seems, these investors who believed in McMahon were not one of them. The proposed plan for the building was 480 inches and not 480 feet. They simply failed to notice that the stroke was double and not single. While investors took this to court after the construction was done and they were shocked by the finished product- it eventually yielded nothing as the plans were indeed for 480 inches, which they had all signed off together. As a result, when the elevator company that had been given the contract learned of the proceedings happening in court, they backed out and left the lot with no elevator to scale the floors. An internal stairway was built after several years, which helped to access the other floors. Before that, a ladder was used to climb to the upper floors of the alleged ‘skyscraper’.

The stories behind the Newby-McMahon Building

The multi-story skyscraper, the Newby-McMahon Building, has had multiple ‘stories’ associated with it, post its construction. There has been speculation amongst residents, who stated that the entire structure could be a decoration with just a water tower stored within it. Some residents say that it is a facility where firefighters engage in practice drills to train in their heavy suits. Some even believe that it was used as a place for bootleggers to smuggle during the Prohibition. It was also rumored that the building had been used as a set for a 1950s themed movie. However, most of this can be dismissed as rumours and small-town gossip running wild in Wichita. 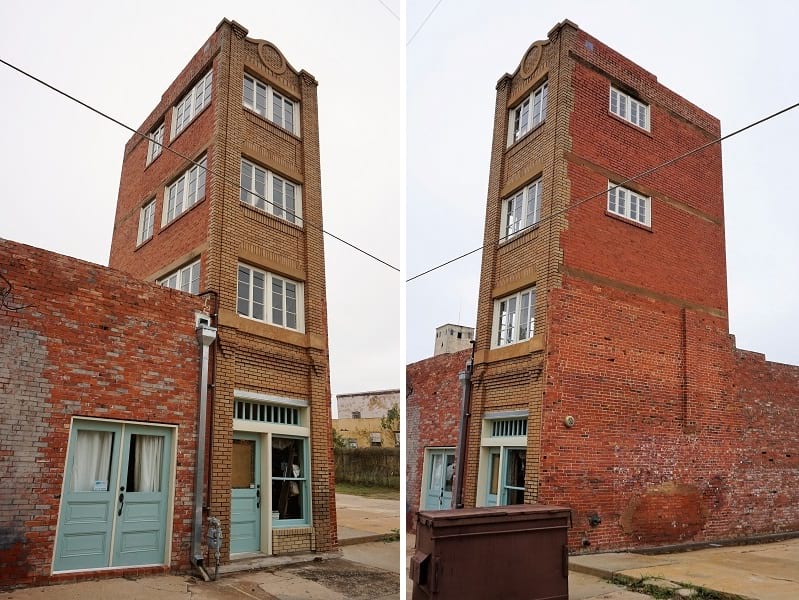 In reality, the four-story building has housed various businesses, although in the initial years after its construction it was left as a vacant lot. This vacancy had been a source of great embarrassment for the investors as well as the locals in the area. After the economy was uplifted post the Great Depression, the Newby-McMahon Building went on to house a barbershop and various local eateries, all of which eventually moved out. A local business that went by the name of Marvin Groves Electric, partnered with a local architecture firm called Bundy, Young, Sims and Potter, and invested $3,748 and restored the structure.

To keep, or not to keep?

There have been several instances where parts of the society living in the area have put forward their views on the matter of the building. Half the people wanted the Newby-McMahon Building to be torn down out of sheer embarrassment, while the other half worked to save it. What we can conclude, is that the building had always been a source of controversy. On several occasions, the building had been scheduled to be demolished, but that kept being postponed until it was eventually given to a local heritage society.

Years later, after an investment of roughly $250,000, the Newby-McMahon Building now houses an antique store and an artist’s studio, both of which are thriving. Upon the complete restoration of the building, it has also been declared a Texas Historic Landmark. Additionally, the Newby-McMahon Building has also been added to the National Register of Historic Places and is part of the Depot Square Historic District of Wichita Falls. It was given the epithet “World’s littlest skyscraper” as a result of its feature on a television show called ‘Ripley’s Believe it or Not’ where they explained how J.D McMahon had successfully conned the investors of the small town, and was absconding after pocketing a large chunk of the $200,000. In today’s economy, those $200,000 would amount to a whopping 2.7 million USD.

Enjoyed this article? You would also love “Stanley Clifford Weyman Found Adventure in Being a Serial Impostor“.

Previous Article
Leonarda Cianciulli: The Ill-fated Correggio Killer who Made Soap and Cookies of Her Victims
Next Article
The Mahabat Maqbara and the Extraordinary Tomb of Bahar-ud-din Bhar