Gereja Ayam: The ‘Chicken Church’ of Indonesia Was Meant to Serve As a Prayer House for All Religions

Gereja Ayam is a church that had been constructed as a prayer house for all religions. Located in Magelang, in Central Java, Indonesia the structure of the church was essentially supposed to be in the shape of a dove. However, the structure oddly resembles that of a hen or a chicken instead, which led to it being commonly known as the “Chicken Church”.

The inspiration behind the Gereja Ayam

The construction of the building began in the 1990s, and the foundation was laid by Daniel Alamsjah. He claimed that he had been inspired by a dream that he had seen the year before, where he witnessed God, and was guided to build a prayer house. Despite being a Christian, the prayer house that Alamsjah was building was meant to be for people from all faiths to pray or meditate in.

Following his divine instructions, Alamsjah decided to build the church on a forested hill, called Rhema Hill, situated in Magelang. The structure of the church was quite possibly one of the largest buildings to resemble a bird- with a giant head, accompanied by opulent and embellished tail feathers. The dispute-riddled construction of the Gereja Ayam

As soon as Alamsjah began the construction of the Gereja Ayam, he started to face a lot of resistance. The native residents of the area surrounding Magelang were Muslims. They did not try to understand Alamsjah’s vision, and neither did they care that the structure he was building was not just a church, but a common prayer house. The Gereja Ayam would have its doors open for all sects of people- essentially anyone willing to climb up the hill. However, unwilling to understand Alamsjah’s cause or his work, some local residents of the area filed complaints against the construction of the Church. This hampered Alamsjah’s work to a great extent and caused his progress to slow down exponentially.

As funds started to dwindle, by the year 2000, the construction of the prayer house was stopped completely. Since he did not have money at hand, Alamsjah could not even afford a caretaker for the building, and soon the unfinished prayer house began to crumble before the ravages of time.

The Gereja Ayam, is a huge towering structure atop a hill, occupying a vast area of land. The area where the prayer house was constructed was a 3,500 square yards plot of land, bought by Alamsjah for 2 million rupiah- approximating to $140. 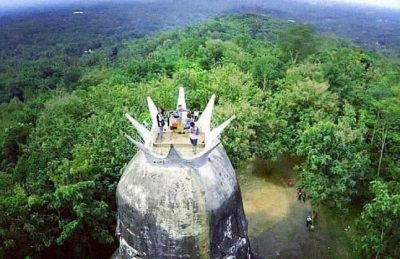 Alamsjah insisted that the final structure of the Church had to resemble the image he had seen in his prophetic dream as closely as possible. He had planned for the facade of the building to be akin to a dove, with a crown on its head to proclaim its holy nature. The exterior of the structure incorporates a red beak, a white head, and an enormously long and grey body. Unfortunately, the crown reminded people of the crest of a rooster, and not something that could denote the holiness of a dove. At the stage when the construction process was halted, the entire structure seemed to resemble a chicken- thus prompting its nickname, ‘Chicken Church’.

The structure in Alamsjah’s dream inspiration had two floors, with several side rooms that were to serve as private spaces for prayer. The lower floor was supposed to serve as a rehabilitation centre with a juvenile outreach program, among other charitable services. Alamsjah himself said,

“The rehabilitation that happened at this prayer house was for therapy for disabled children, drug addicts, crazy people and disturbed youth who wanted to fight.”

At least 30 local men were provided with employment during the construction of this building.

Magelang, Central Java, has evolved into one of the most popular tourist spots in the country of Indonesia, owing to the location of the famous Borobudur Temple there. The Borobudur Temple was built in the 9th century and now qualifies as a UNESCO World Heritage Site. The Gereja Ayum is just about three miles from this busy temple. In fact, despite being a crumbling structure, the “Chicken Church” of Gereja Ayum owes much of its popularity to its prominent location- allowing people to “accidentally” discover the interesting facade on their way out of the Borobudur Temple.

In 2016, there was a documentary called ‘Into the Inferno’ which had a prominent segment featuring the Gereja Ayam, thus propelling the structure further into the limelight. Now that people have taken cognizance of the existence of the quirky structure and interesting history of the Gereja Ayum, it has become quite the hub for global tourism. As photographs began to go around, word of this interesting structure kept spreading further. Consequently, Alamsjah began to charge a nominal admission fee to allow entry into the church. Though measuring to under a dollar per person, Alamsjah began to amass quite a fortune from this entry fee, owing to the increased footfall at the location. Alamsjah planned to use these funds to re-start the process of building and renovating the Church. In recent years, the ‘Chicken Church’ has become a huge attraction not only amongst tourists, but also couples posing for wedding photographs, and even occasionally people who hope to get married at the Gereja Ayum.

In August 2019, Alamsjah, who is close to 70 years old now, was finally able to complete constructing certain aspects of the building. He completed the construction of the windows and was also successful in paving the roads.

The prayer rooms that were underground have been remodelled and the grounds that surround the church are being looked after. The place is now more visually stimulating as the inner walls of the rooms have been decorated with paintings and murals by local artists.

Enjoyed this article? You would also love “A Four-Storey Building That Is ‘the World’s Littlest Skyscraper“.

Previous Article
Maned Wolf: The Existential Crisis of Chrysocyon – the Golden Dog That Looks Like a Fox
Next Article
Understanding Day Length Fluctuations – What They Are and What Causes Them