Cambodia’s Magnificent Angkor Wat: One of the Largest Religious Monuments in the World

In 1113 AD, King Suryavarman II ascended the throne of the Khmer Empire and soon established himself as one of its most illustrious rulers. Soon after his coronation, he embarked on a construction program and built some of the most magnificent monuments in the world in his capital city Yaśodharapura. The best known of these is Angkor Wat, a large temple complex that, when first built, was dedicated to the Hindu god Lord Vishnu.

The capital city, now known as Angkor, is in the northern province of Siem Reap in Cambodia. In the 14th century, as Buddhism caught on in the country, the original Hindu temple was gradually transformed into a Buddhist temple. It is the only temple in Angkor that was not abandoned in the 15th century when King Ponhea Yat moved the capital to Phnom Penh. 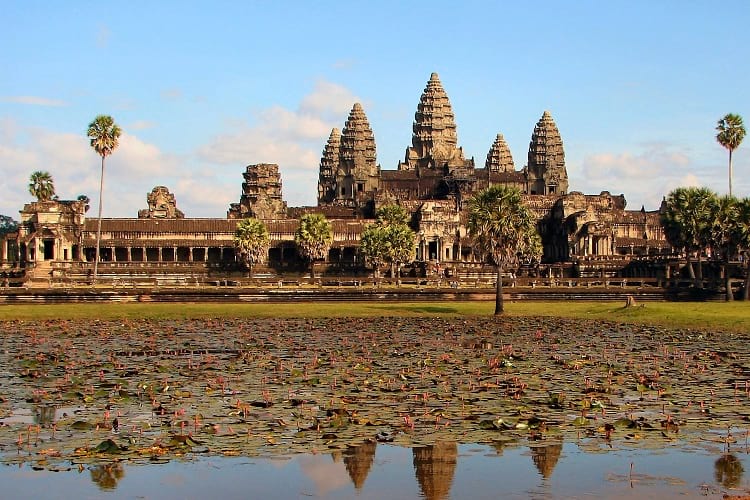 The construction of Angkor Wat

It took King Suryavarma II 30 years to build the temple, and several thousands of labourers were engaged in working on it at the same time. They used laterite bricks as the base material for the construction of the foundations and the internal structural parts of the temple.

Laterite is a rocky soil that is rich in iron and aluminium. It is mined from areas that are below the water table, and so it is soft and moist in its composition. In such a state, the laterite can easily be cut into blocks. These later harden on exposure to air as this causes the moisture to evaporate, and once they have hardened, they are suitable for use in building work.

For constructing Angkor Wat, the workers laid the laterite bricks without using mortar. Instead, they fixed them together with mortise and tenon joints in some cases, while, in others, they used dovetails and gravity. They then clad the laterite walls with sandstone. Since this is a relatively soft stone, it was possible for the craftsmen to create intricate carvings on it. This Mesozoic sandstone comes from quarries in the Phnom Kulen hills, about 40 km away from the Angkor Wat temple, and the workers transported it to the temple site via canals.

The architecture of Angkor Wat

Spread across an area of around 500 acres, the temple faces towards the west, which is the cardinal direction associated with Lord Vishnu. The architecture of Angkor Wat displays the best of two Khmer styles, the Temple Mountain style and the Gallery style.

The Temple Mountain architectural style shows a representation of Mount Meru, the abode of the gods in Hinduism. The Angkor Wat temple is pyramidal in structure and is made up of several levels, with enclosures and a moat surrounding it; the enclosures represent a chain of mountains, and the moat represents the cosmic ocean. A gallery is a passage running along the walls of enclosures or the temple axes. The gallery may be open on one or both sides. In Angkor Wat, the structure of the temple was buttressed by adding half galleries on one side of the enclosures. The beautiful architecture of the temple. (Pixabay)

Angkor Wat has three levels. The tower in the centre of the temple rises to 31 metres above the third level. It forms a quincunx with the towers that arise from the four corners of the temple’s second level. The designs of the tops of all the towers resemble lotus buds.

To reach the third level, which is known as Bakan Sanctuary, you have to climb a very steep set of steps. 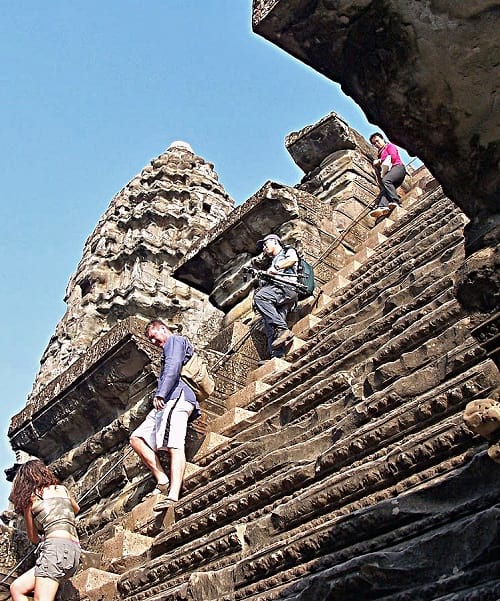 Steep steps to reach the third level of the temple. (Billbeee / Wikimedia Commons)

Three enclosures of descending heights surround the square of the central temple. These enclosures form interlinked galleries and finally, the outer wall. The latter measures 1025 metres by 800 metres and has entrances on the eastern and western sides. The main entrance is on the western side, and it has a 235 metres wide porch decorated with carvings and sculptures.

There is moat beyond the outer wall, and it surrounds the temple complex in entirety. The moat has a width of 650 feet and is 1.5 kilometres in length and 1.3 kilometres in breadth. It has a depth of 13 feet.

A sandstone causeway, measuring 475 metres in length and 9.5 metres in width, crosses the moat and stretches from the main entrance to the central temple. Balustrades depicting Nagas line this causeway; Nagas are divine half-human, half-snake beings from Hindu mythology.

In the right-hand tower of the temple, there is a 3.25 metres high statue of Vishnu carved from a single block of sandstone. It might be the statue that King Suryavarman II originally installed in the central tower and which, under later rulers, was later shifted when the temple became Buddhist. 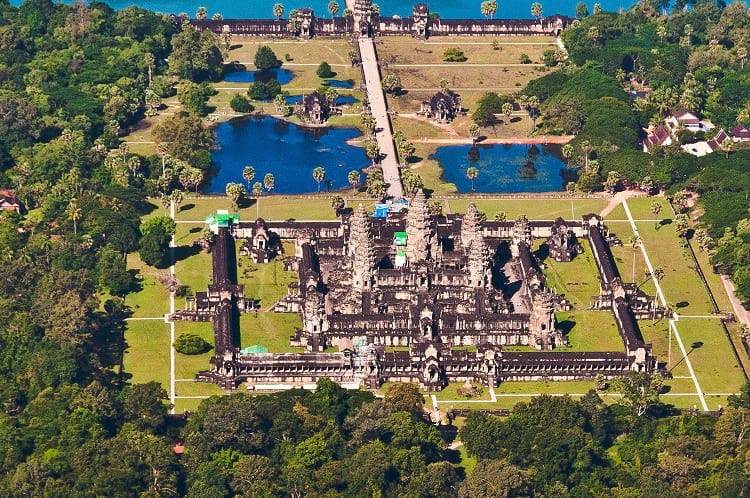 The bas reliefs at Angkor Wat

The walls of the temple are adorned with intricate bas reliefs that depict events from the life of King Suryavarman II as well as events from mythological stories from the Hindu epics, Ramayan and Mahabharata.

The bas reliefs in the south gallery show King Suryavarman II engaged in a variety of activities. In one, we see him wearing fine jewellery, seated on elaborately carved furniture in one relief. He is in a forest in another relief, in the company of his attendants, courtiers, noble ladies, and priests. A third relief shows the King is in armour, carrying a weapon, with his well-equipped army around him.

The most famous bas reliefs at Angkor Wat are those of the apsaras wearing elegant clothes and different hairstyles.

The conservation efforts at Angkor Wat

After an appeal by King Norodom Sihanouk, UNESCO listed Angkor as a World Heritage site in 1992.

The Cambodian government created the Authority for the Protection of the Site and Management of the Region of Angkor (APSARA) in 1995 for managing and protecting the Angkor Archaeological Park. Since then, Germany, France, China, and Japan also have been involved in various Angkor Wat conservation projects.

Earlier restoration work that made use of cement and chemicals caused some damage to various sandstone surfaces in the temple complex. Some of the damage to the stones is also due to the filamentous cyanobacteria that are prevalent in the area. These cyanobacteria release organic acids that cause the stones to deteriorate. Unfortunately, the cyanobacteria are resistant to dehydration and radiation treatments. So, conservation of the Angkor Wat temple complex continues to be an on-going activity.

Previous Article
Iron Lung: The History of the Present Day Breathing Machines
Next Article
Radar Technology’s Early Detection System Revolutionised the World and Made it a Better Place to Live in