What is a Life Size Model of Noah’s Ark doing in Kentucky? Most of us know the Bible story of Noah’s Ark where a flood of epic proportions threatened to wipe-out mankind and every land animal. Noah built a large ship under the guidance of God which catered for his family as well as two animals from every species. According to the Bible, every animal alive today branches from those who sought refuge on the ark and every human being are descended from Noah’s family. While many people have since resigned this story to myth there is a still a large following of believers none more so than in America.

In what is known as America’s ‘Bible Belt’ a themed family center has been constructed illustrating the conditions of Noah’s work and voyage. It is called Ark Encounter, situated in Kentucky, a southern state of the US. The brainchild of Christian fundamentalist Ken Ham, the Ark was planned by a group called Answers in Genesis whom he founded.

They also run a Creation museum in the same state. Funding was an issue for the vastly ambitious project so they collaborated with a corporation called Ark Encounter LLC. to help raise funds. This was controversial as it required over $100 million dollars which included $62 million from the city of Williamstown as well as many private donations. Non-religious and religious people alike argued that the money could have been better spent. Construction began none the less with over 1,000 Amish builders employed using timber and ancient techniques. It became the largest timber frame structure in the US. 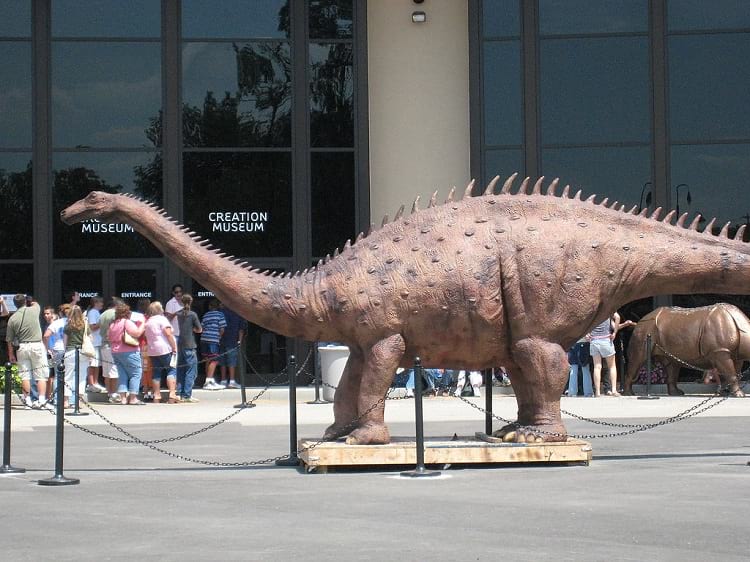 It opened on July 7th, 2016 to commemorate Genesis 7.7; the chapter of the Bible in which Noah and his wife entered the ark. As before its opening, protestations and criticisms remain. One such comes from a famous presenter and engineer Bill Nye (commonly known as Bill Nye the Science Guy due to a television program he hosted). He debated with the creator Ken Ham on an opening day with the exchange being filmed.

From a scientific standpoint, many feel it is wrong to teach children scrupulous information including that the Earth is only 6,000 years old. From a religious viewpoint, they maintain that it is wrong to teach children that we are animals, relating to the theory of evolution. There are also other criticisms out of history. These are regarding the tax breaks received by the center and rumours that their hiring policy only accepts individuals of Christian faith.

Whatever the viewpoint, the Ark gained 1 million visitors in its first fiscal year which was considered a great success.

Ark Encounter is a full-scale model as described in Genesis. It is 510 x 85 x 51 feet, a truly ginormous exhibit, bigger than a football field. There are three decks mostly with models of animals, dioramas of cultural exhibits and public facilities. There is a gift shop, restaurant and a petting zoo among other attractions on site.

A main feature of the Arc is to dispel any word that deems the schematics of the story impossible. For example, we can now estimate that there is over 1 million animal species and rising. This is a modern critique as people will say how could this amount of creatures fitted inside. A spokesperson for the center states that at the time of the Bible the term species was different and that the concept of a ‘kind’ of an animal was used. Simply put, if an animal can breed with another, they are in the same kind. There would have been about 1,500 animals on board they estimate, at most 7,000 so believers ascertain there would have been ample room inside. And of course insects and fish were left to their own devices.

One disagreement between sides is dinosaurs. Scientific research has found that early humans first appeared 6 million years ago, while the dinosaurs went extinct 65 million years past. Christianity puts them both together and so models of young dinosaurs are exhibited inside Ham’s design. Techniques are explained on waste management, ventilation, and feed, all of which using ancient methods.

It is not just animals that are inside the Ark, however. There are scenes showing Noah, his wife, his sons and information about the lives they lived are depicted. Also, Noah’s grandfather, Methuselah, another famous Bible figure who lived to be 969 years is mentioned. Displays show the situation outside of the ark also, during the floods where people were punished for sinful behaviour, for instance, the worship of false gods.

The exterior of the arc is illuminated at night, another cause for controversy. The site explains, “The Ark is illuminated with rainbow colors in the evening as a testament to the true meaning of the rainbow. After the Flood, God designated the rainbow as the sign of His covenant to never again destroy the whole earth with water.”

People believe this is in reference to Gay Pride. A criticism alluded to earlier is that employers must be of a straight orientation – something the center denies. The Encounter continues to increase in popularity despite these accusations. Or perhaps under the adage of ‘all publicity is good publicity’, the bad press is helping.

Either way, the Ark will be around for many years to come. And while live and let live should always be preached, science and religion can both be taught, how far do we go in terms of teaching children far-fetched versions of history? The problem with that, however, is that for whatever side you are on, no-one can disprove the other. And that will be the same for a long time to come.

Enjoyed this article? Also, check out “Gereja Ayam: The ‘Chicken Church’ of Indonesia Was Meant to Serve As a Prayer House for All Religions“.