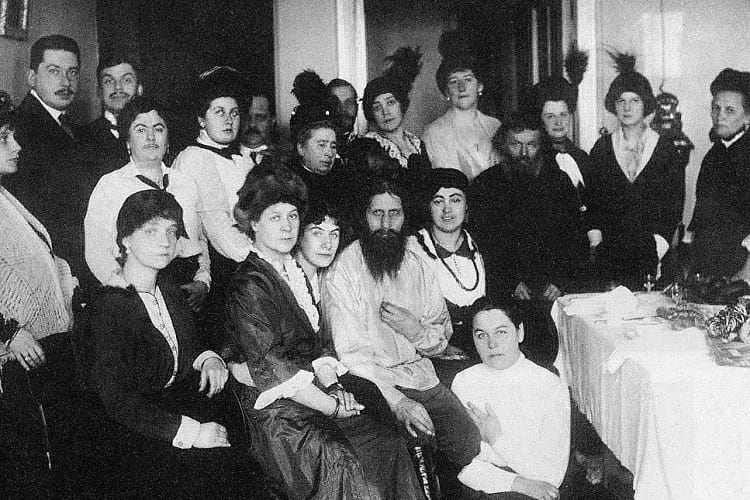 Rasputin in the center surrounded by his admirers in St. Petersburg, 1914. (Karl Bulla / Wikimedia Commons)

It’s amazing how some parts of history are condensed into tiny, sometimes cryptic and many times wrong examples. Take for instance, Marie Antoinette. Many people will know nothing about her role in the French Revolution, they will only know the quote, “Let them eat cake.” And apparently, there is no record of her ever saying it (it is attributed to a Princess before her time). Even so, whilst untrue it still illustrates why Marie Antoinette is famous, citing the power struggle between peasants and the elite. Other examples include Van Gogh’s ear, Isaac Newton’s Apple, Napoleon’s height and Edison’s lightbulb. While all stories are untrue or exaggerated, they still show that the apple doesn’t fall far from the tree – well, except in Newton’s case where it didn’t fall at all.

Born circa 1869, near the town of Tyumen on the cusp of Siberia, Grigori Yefimovich Novykh grew up on a peasant farm. It was treacherous living, so much so that seven of his siblings did not survive through childhood. A theme begins in his early life which dominates throughout his entirety. It is that much of Grigori’s life is clouded with conjecture based on rumours and eye-witness accounts.

Another theme forged is that Grigori had a dark reputation. He was a notorious drinker, womanizer, and a thief but naturally charismatic and handsome, many saw him as a lovable rogue too. Religion and the supernatural were major beliefs back then and Grigori became involved in such mysticism. Villagers believed he could cure horses and speak to God. He married a village girl Prastkovya in 1887, they had four children, the most famous of which would be Maria. 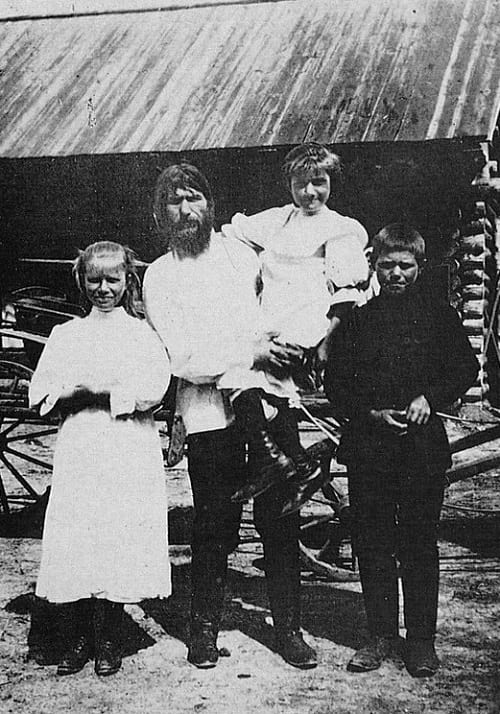 A photo of Rasputin with his three children. (Wikimedia Commons)

At 28 he became obsessed with Religion. The belief of the land was Orthodox Christianity but Grigori delved into offshoots too. He embarked on several religious pilgrimages, even venturing as far as Greece on one occasion. His activities made him known among the Orthodox clergy and brought him many followers but also controversies.

Some of his teachings were said to be unholy and illicit. For instance, Grigori was accused of joining the Khlysty, a sect which seceded from Orthodoxy. They were said to indulge in ritualistic orgies and flagellation. It seems obvious that Grigori was involved in such practices as he requested to be renamed ‘Rasputin’ (‘Debauchee’ in Russian). It represented that he believed true salvation must be attained through sin. Despite these suspected indecencies, through various connections, he climbed the holy ladder. Grigori made it to St Petersburg, the then capital of Russia (2.500 KM from Tyumen) where the leader of Russia – Tsar (named for Caesar) Nicolas II – ruled and formed a close connection with the wanderer.

Preaching Christianity would be a backstory as Rasputin’s rise was mainly due to curing the Tsarevich, the Tsar’s only son and future ruler. The boy Alexei suffered from haemophilia – meaning he was susceptible to abnormal bleeding. Rasputin drove away doctors and consistently improved the boy’s condition meaning his mother, the Tsarina, cried him a miracle healer. The Siberians influence grew, he was given a flat in the center of St. Petersburg and roles within the government.

Again, controversy followed Rasputin. Accounts say he was far from coy when taking in prostitutes or even female members of the aristocracy to his flat. He was denounced for devil worshipping, of using the Tsar as a political weapon and of having an affair with the Tsarina. It is said that others including the British accused both him and the German-born Tsarina of being German spies.

This is where Rasputin became infamous as the monk who couldn’t be killed. At this time in Russia, there were many devout Christians as well as political parties vying for power and someone took umbrage. He was first stabbed by a vagrant in the stomach but survived. That assassin’s motives are still unknown. A photograph of Rasputin from 1916, the year he died. (Wikimedia Commons)

This attempt would be a prelude for when members of the nobility led by a rumoured cross-dresser named Felix Yuposov attempted an assassination. They believed Rasputin had too much power as the Tsar was out of Russia during the break of World War I.

Yuposuv invited him to dinner. He poisoned his cakes and wine, shot him three times including once in the head and finally rolled him in a carpet, throwing him out of the balcony into the sub-zero River Volga. Finally, the Siberian was deceased. His adopted family the Romanovs did not have time to mourn. A political coup meant that they fled east only to be butchered in the basement of a winter palace. Dead Rasputin with a bullet in his head. (Wikimedia Commons)

His life and motives are impossible to fully comprehend but some light has been shed on his practices. Firstly, the world was a very different place then, where religion and the supernatural were considered truth. And even those who did not believe were forced to follow it for fear of castigation. Rasputin was an extremely charismatic man, mixed with extreme confidence and bravery which of course can get one very far. There are clips online which show famous hypnotists such as Derren Brown showing its power, many believe Rasputin was adept.

As for the healing, historians now have the idea that Grigori’s insistence for doctors to leave Alexei, did actually help. By denying him pain-killing medicines like Aspirin which is said to thin the blood. Then there are more outlandish claims. In the theme of sex sells, Rasputin’s weapon was believed to be below his belt. A thirteen-inch penis which is said to be on display at the Russian Museum of Erotica after being sold among various second parties. The madness didn’t stop even when Grigori died.

His daughter Maria fled Russia after her father’s death and became a lion tamer in the US. If sources are to be believed she named her dogs after the killer Yupusov. But that’s another story, as is that of the Romanov family who also proved extremely tough to kill. To learn more about Rasputin, there are many books available including accounts from his daughter Maria, and killer Felix Yuposov. There is a film starring Alan Rickman, an actor worthy of the role.

Also, the tale of Harbard in The History Channel’s Vikings is a mirror image of the Russian; a wanderer who heals Ivar the Boneless and then seduces his mother, the Princess Aslaug. Stories of holy wanderers are notorious in every religious circles and Rasputin was not the first and certainly won’t be the last.

But perhaps, he was the oddest.

Recommended Reads:
1. Nicholas and Alexandra: The Classic Account of the Fall of the Romanov Dynasty | By Robert K. Massie
2. Grigori Rasputin: A life From Beginning to End | By Hourly History

Previous Article
The Deadly Premonition of Sugar Ray Robinson that came True, 1947
Next Article
What is a Life Size Model of Noah’s Ark doing in Kentucky?