Sagrada Familia: An Unfinished, Colossal Spanish Basilica, Under Construction for More than 136 Years 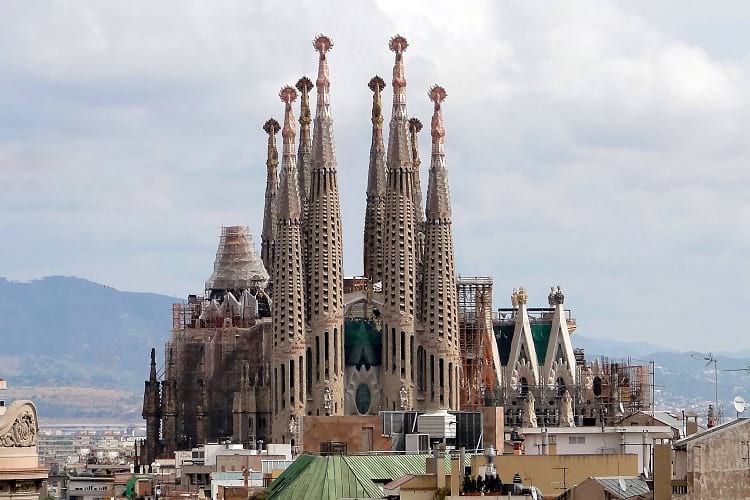 A Roman Catholic Church, Sagrada Familia, was conceptualized by a Spanish Christian, Josep Maria Bocabella (1815-1892), in the late 19th century. The industrial revolution was telling on the faith of masses in church and he thought he must do something to reverse the trend. So, he started the construction of this Church in Barcelona, in 1882. The first Architect, Francisco de Paula del Villar y Lozano, began work in neo-gothic design. He was removed in 1883 and replaced with Antoni Gaudi, the exponent of Catalan culture of Spain. The Church was then moulded in Gaudi’s idiosyncratic design till his death. Then there were interruptions and sabbaticals, and 136 years passed by. But all along, the monument remained a tourist attraction and a functioning church. 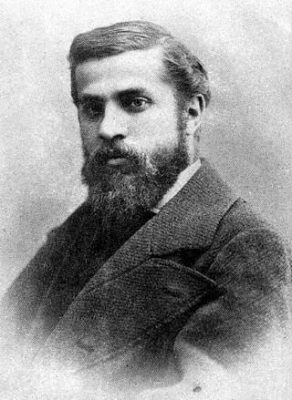 Gaudi was fired with missionary zeal

A lover of nature, and Catholic by faith, Antoni Gaudi was best that Joseph Maria could have found to shape his vision. Inspired by real-life forms, Gaudi tried to replicate the organic world of God. He considered God as the Master Architect and worked hard to reflect His grace in whatever he did. So possessed was he about the task in hand that he never bothered about time and budget. All he cared for and mused about was his design which must be as live as real life. He lived frugally, like a hermit, and believed he was picked by God for the exposition of Christianity through Architecture. His conviction was as fierce as it was eccentric. No wonder, his contemporary Architects let him have his way than counsel him on his plan and procedures.

From 1915, Gaudi began work on Church building with crypt (underground room in the Church where important people are buried after death) which his predecessor had left unfinished. Then he moved on to nativity façade (portico). As good a sculptor as an architect, he crowded walls with biblical scenes, saints, symbols, inscriptions and a medley of life forms ranging from reptiles, birds, seashells, fruits and flowers. The central part of the Church building was designed for choir (for 1,500 heads) and top for the chimes of bells.

In Gaudi’s scheme, there was no place for straight lines and right angles. He revelled in tree-like columns which portrayed his view of Mother Nature. Images merged with, and flowed into, each other, not necessarily in good taste, but invariably shocking and surprising the onlookers in huge measure. Even his die hard critics advised every patriotic Spaniard to have a feel of Gaudi’s ‘superbly- creative-bad-taste’. 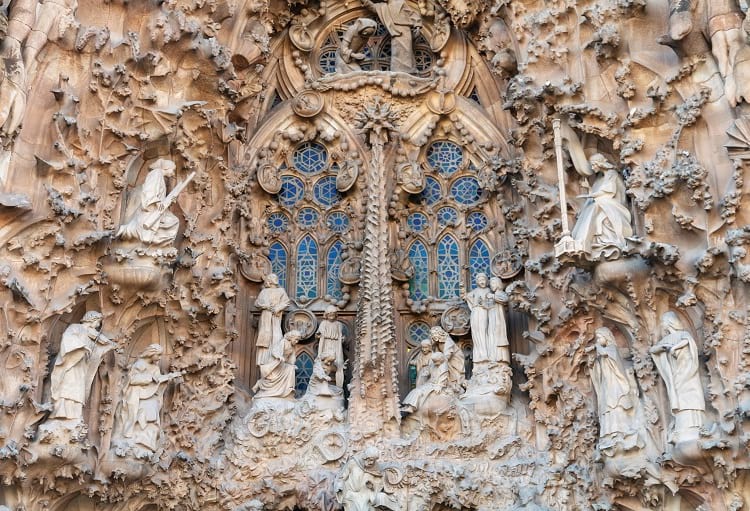 Details in the facade of the church. (A,Ocram / Wikimedia Commons)

A brooding bachelor, Gaudi was hit by a tram while crossing a railway track in 1926. He died 3 days later, and was buried in the same crypt he began his work with. The thread of his unfinished work was picked up by his loyal team. With Spanish Civil War in 1936, work got derailed. A group of revolutionaries barged into the Church and destroyed models and drawings left by Gaudi. Catholicism came under attack. An attempt to bomb Sagrada Familia failed, but 40 churches in Barcelona were demolished. Twelve people associated with the Sagrada Familia project too, were killed. 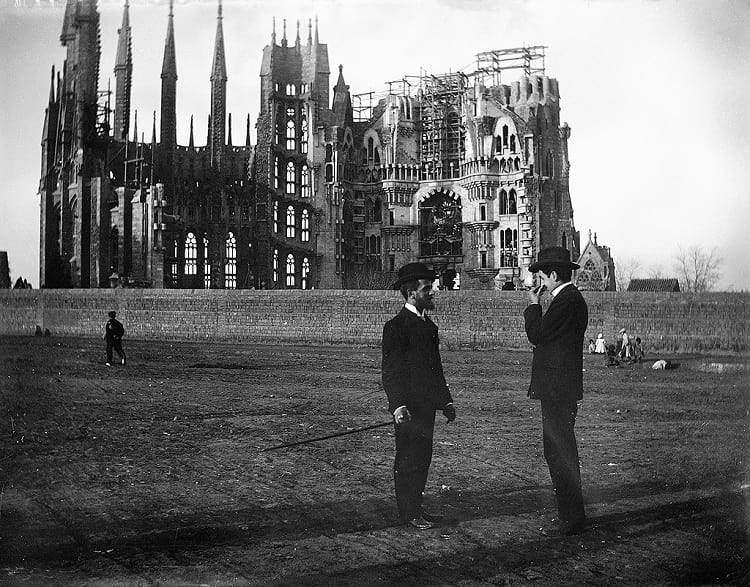 In spite of the Spanish Civil War, construction of Sagrada Familia continued

As the civil war ended in 1939, little was left of Gaudi’s blueprint on the building project. So, the construction work remained suspended for long. In 1960 there was a call to stop any further work on the proposed Church. It was argued that the monument was a piece of art which must be left untampered as a mark of respect for its creator – Antoni Gaudi. But the patrons of Sagrada Familia disagreed. Monument, they said, was more than just the memory of the late architect. That cleared the deadlock and the construction restarted in the 1970s. A new series of wall pictures were made under the supervision of sculptor Josep Maria Subirachs. These were about the brutality of the crucifixion of Jesus Christ.

Parametric design software gave a fillip to the project

Come 1977 and the Church still had no roof and interiors. A team of Architects brainstormed to understand Gaudi’s designs in order to complete the pending work, but failed. Even computer software, in the early nineties, couldn’t unravel the secret of Gaudi’s complex designs. But the dogged persistence of Mark Burry, the executive architect and researcher, paid off. He found that designers of aeroplanes worked with the same geometric complexity as Gaudi did. He therefore, used aeronautical software to decide the architectural strategy for working on interiors of Sagrada Familia. In a matter of coincidence, the buildings designed by American architect Frank Gehry had uncanny similarity to Gaudi’s design. So, Mark Burry and Frank Gehry joined hands to create parametric design software. This software became a trendsetter in the early 2000s, with La Sagrada Familia as one of its users.

Final finish yet to happen

With parametric design, the work on interiors began in right unrest and got completed by 2010. But the Church is still far from a full and final completion. Much more remains to be done. It is hoped that the year 2026, the 100th death anniversary of Gaudi, may see the Church completed in all respects. That would put the cumulative construction period to a whopping 143 years. The building would then have 18 towers, the middle one being 560 feet high. As of 2018, the brown coloured part in the model are already built and the remaining is yet to be completed. (Balou46 / Wikimedia Commons) 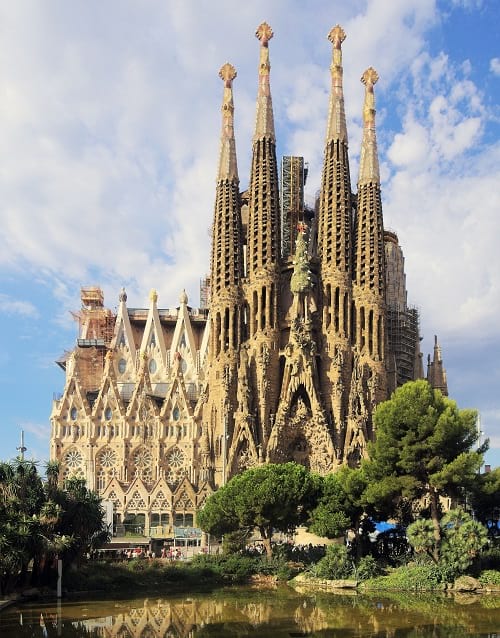 What made the church tick?

What makes Sagrada Familia an object of undying curiosity, and most visited tourist site in Barcelona? The answer lies in its history and its architecture. The idea of the monument was conceived when the industrial revolution was being perceived as a threat to religion. Joseph Maria Bocabella alluded the misery of Barcelona’s poor to their drift from religion. So, he set out, in his own way, to correct the fault. He would do it by building a church, dedicated to Mary, Joseph and Jesus- the holy family (La Sagrada Familia), which would inspire people to be religious and God-fearing. 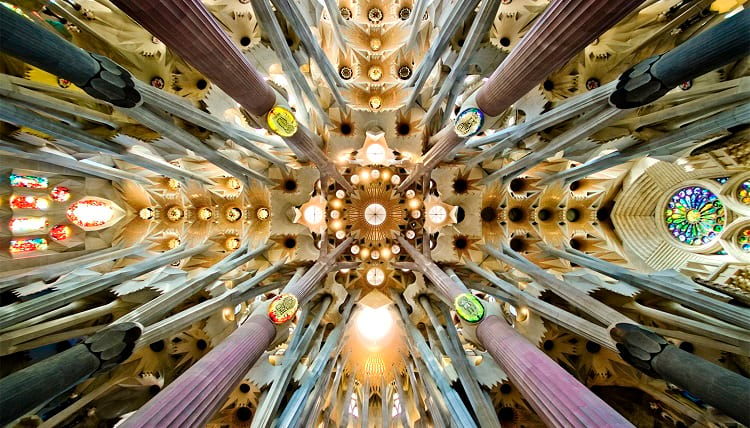 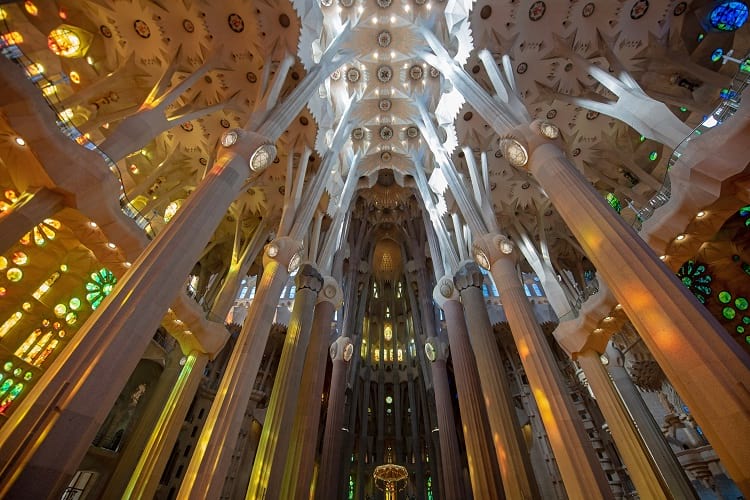 The work began in Neo-Gothic style prevalent in Europe in those days. Come Gaudi, and his unique style got added to it. An amalgamation of myriad styles continued as the construction work lingered on for more than a century. Work, as it progressed, emerged as a heady cocktail of myriad views and perceptions. Whereas Gaudi’s architecture seemed live and breathing, subsequent imitations of it were static and limp. The change, obviously, added to its mystery quotient, attracting 20 million visitors to this unfinished church every year.

Enjoyed this article? Also, check out “Sedlec Ossuary: The Famous Bone Church of Kutná Hora in the Czech Republic“.