Is the Story of ‘Zana’ the Ape-Woman who could Outrun a Horse True? or a Myth? 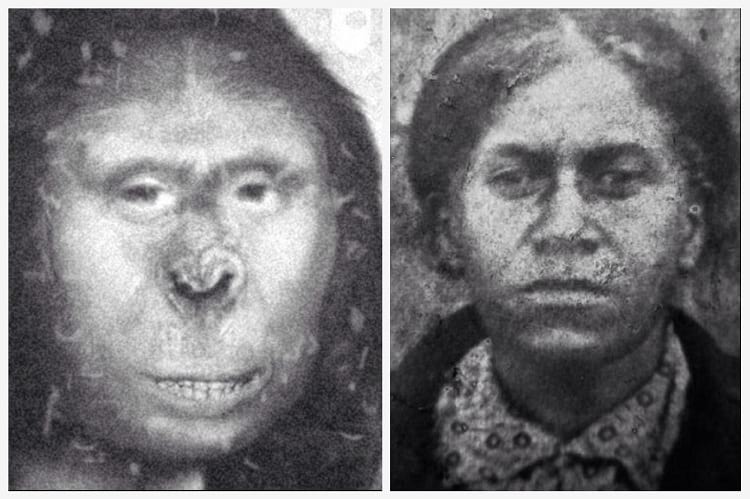 Artistic impressions of Zana (Left) and her daughter (Right).

In the latter half of the 19th century, the Ochamchiri region of Georgia in Russia, a group of local hunters found something beyond their expectations, which presented the world with an enigma for several years. They found a creature which looked like a human but didn’t appear to be one simultaneously. It gave the impression of a female human, but with ape-like features.

She had a terrifying face – a broad face with high cheekbones, a flat nose with turned out nostrils, muzzle-like jaws, broad mouth with large teeth, low forehead, and eyes with a reddish tinge. Her skin tone was dark greyish-black, and her whole body was covered with reddish-black hair. She had a very athletic body, with a tall, large build. She had muscular arms and legs, and fingers thicker than typical human fingers. Her expression was described to be purely animal. After the hunters captured her, she changed several hands and was finally bestowed upon a nobleman known as Edgi Genaba. She was taken to the village of Tkhina where his estate was located and sheltered her in a strong enclosure.

She was ferocious at first, as noticed by the villagers who were terrified of approaching her in her enclosure. Nobody ventured to give her food, it was thrown at her. Gradually, over a period of three years, they managed to tame her. She was then made free to wander about, but she never wandered too distant from the place where they regularly fed her.

The villagers started calling her Zana. She learned a few simple tasks from the villagers such as carrying wood or grinding corn. She obeyed her master, even when she was in a foul, angry mood. The villagers saw her incredible athletic capacity whenever she effortlessly lifted an 80 kg sack and carried to the village. It was said, that she could outrun a horse. She developed an affinity for grapes. She sometimes climbed trees to retrieve them.

She used to stray into the forest at night-time and rested in chilled pools of water on warmer days. Her aversion to heat meant that she preferred to walk naked, after tearing off any form of clothing meant to keep her warm, even during the harshest of winters. Perhaps the fascinating aspect of her life is the fact that she gave birth to descendants, which, as suggested by many, is a consequence of her wine addiction.

She would drink to unconsciousness and it appeared that few men took advantage of her situation. She would often give birth unassisted, and only after the death of a few babies did the villagers began taking care of the children as their own. Four of her children survived – two sons and two daughters. They grew up as humans and were completely normal except for a few physical features and mental traits. The youngest son, named Khwit, died in 1954.

Her offsprings were powerfully built and had quick temper. Zana herself is believed to have died in the 1890s. Several researchers have tried to find her remains in order to study them but unfortunately, they were never found. They have, however, succeeded to exhume the remains of her son, particularly his skull, from a well-indicated grave in the Tkhina village.

The results of a subsequent study were published in 1987 and said that the skull “exhibits an original combination of modern and ancient features,” and that it approaches closest to “the Neolithic Vovnigi II skulls of the fossil series.” In 2015, a professor at the Oxford University, Bryan Sykes, concluded the results of a DNA study on her living descendants and her son Khwit’s tooth that her DNA is “100 percent African”  but did not resemble any known group.

He theorized that her predecessors migrated out of Africa 100,000 years ago and settled in the secluded Caucasus area for several generations. Conclusively, it can be said, that the story of Zana, the ape-woman who could outpace a horse, has greater substance than just a myth.

Recommended Read:
The Nature of the Beast: The first genetic evidence on the survival of apemen, yeti, bigfoot and other mysterious creatures into modern times | By Bryan Sykes

Previous Article
The Greatest Survivor, Hugh Glass
Next Article
D.B. Cooper: The Man Who Hijacked a Plane and Got Away

Any cookies that may not be particularly necessary for the website to function and is used specifically to collect user personal data via analytics, ads, other embedded contents are termed as non-necessary cookies. It is mandatory to procure user consent prior to running these cookies on your website.