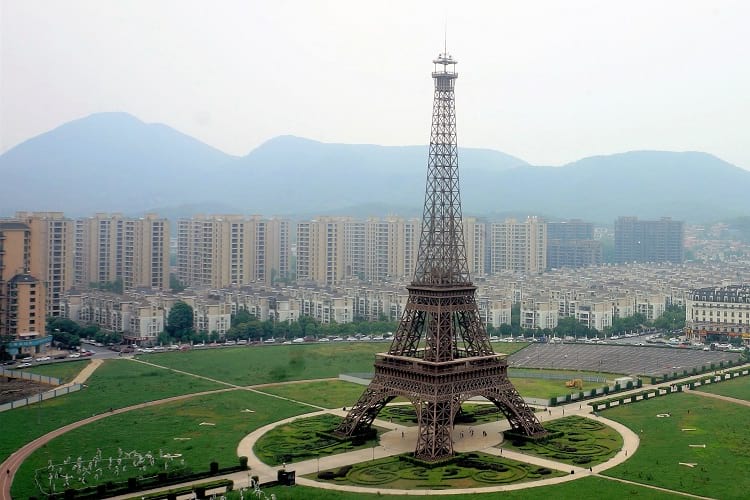 The Chinese, historically, considered their country to be the centre of the world and now you can sample the world without straying out of China. Always wanted to visit Paris? England? Hallstatt? That’s alright, China has the almost similar versions of these cities and you are welcome to come and visit.

We won’t go into the tired, old cliché about how the Chinese copy everything. You copied too when you learned to read and write. It is a learning process. By building these more or less exact replicas, Chinese construction companies are showing off their chops. They have some of the best talents in the world and are capable of building anything they want. That is more than what people who mock them can do.

The idea of building cities to resemble Western ones came about in 2001. The Shanghai Planning Commission decided to spruce up their city’s ungainly outskirts with nine new municipal suburbs under the ‘One City, Nine Towns’ scheme. They thought that if they built beautiful replicas of Western cities and offered the public the charming lifestyle that came with these cities, the local people would be more than willing to move from overcrowded Shanghai to these brand-new suburbs.

Tianducheng, which translates to “Sky Capital City,” was once a rural area comprising of rice paddies. It is located in the coastal Zhejiang province, not too far from the provincial capital Hangzhou, and, while you can still see the rice paddies, the area has acquired a French flavour. One of the first things you will notice is the Eiffel Tower. At 354 feet, it is much smaller than the real one in Paris, but it is still tall enough to be eye-catching. A meticulously landscaped, residential area, built in the style of the Parisian architect Haussmann and including a version of the Champs Elysées, stretches outward from around the Eiffel Tower. You will find here a very fine reproduction of the famous Bassin de Latone fountain from the Versailles gardens. 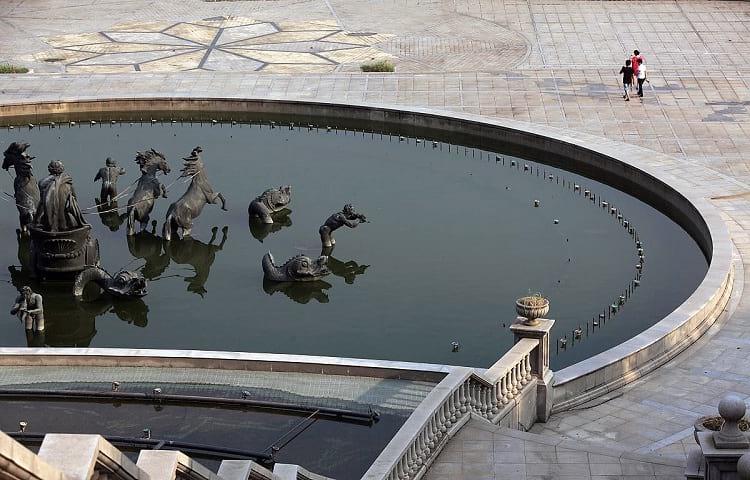 The Zhejiang Guangsha Co. Ltd conceived the idea of building Tianducheng as a faux Parisian town in 2007, and they designed it to fit in over 100,000 residents. So far, according to news sources, only about 2000 people have move in to live in Tianducheng. The town, however, gets plenty of domestic and foreign visitors, including newlyweds on their honeymoon. The latter flock here to experience second-hand the original Paris’s overdone reputation as a romantic destination. That they end up having a good time here shows how you don’t have to go far away to experience romance. You can have it in your own country. The original English town has brick houses and cobblestone streets. China’s Thames Town is in the Songjiang District, about a 40-minute drive to the southwest of Shanghai. The faux Edwardian houses sit amidst real manicured privet hedges and the high street is lined with white Victorian terraces. Visit the Gothic Christ Church in the town square. If you take your dog along, keep him or her leashed and away from the lampposts. They are genuine British items and were imported from Great Britain. If you are hungry, stop by a fish-and-chip shop or walk into a Tudor pub. Want to tell your family about this great town? Put your mobile away and step into an iconic British red phone box. The town planners designed it to fit 10,000 people. There are nine universities in the region and the planners hoped that they would provide the much-needed residents for their new town, along with the middle-class from Shanghai. The houses in Thames Town are pricey, however, and out of the reach of most middle-class Chinese. It seems that most of the real estate was snapped up by wealthy Chinese buyers as second homes or as investments. Few of them live in Thames Town year around. There are fewer than 1000 permanent residents and the town appear so empty, it feels like walking through a set that is still waiting for its actors. Thames Town is becoming a ghost town. The builders spent $330 million over a three-year period and the Shanghai Planning Commission, well-pleased with the results, declared that the boundary between China and Europe had now become ephemeral. To be exact, they said: “Visitors will soon be unable to tell where Europe ends and China begins.”

The original alpine town of Hallstatt is located on the banks of Lake Hallstatt, with tall mountains looming in the background. It is a tiny town, fitted on a narrow strip of land, and with a population of about 900 residents; you could walk through the entire place in 10 minutes. It had salt mines in ancient times, now it depends on its draw as a tourist spot. Its enchanting and picturesque gingerbread houses and the skiing possibilities in the mountains have made it famous enough to draw over 80,000 visitors every year and grant it status as a UNESCO World Heritage site.

Chinese builders, after they had sent their architects to study the real village in great detail, spent $940 million to build a replica of Hallstatt in Huizhou in Guangdong province in southern China. The state-owned, Beijing-based China Minmetals Corporation financed the project and announced they were building it in June 2011. It was at this time that the natives of the real Hallstatt first heard that their tourist village was going to have a doppelganger in China that would also, most likely, draw visitors. Some of the residents were outraged, but the mayor of Hallstatt, Alexander Scheutz, took a more pragmatic view of the matter. The Chinese Hallstatt was almost half built at this time and the Chinese were by no means going to stop their construction work to assuage the hurt feeling of the real Hallstatt dwellers. So why not make the best of the situation? Herr Scheutz reached out to the Chinese, attended the new Hallstatt’s opening ceremony in 2012, and signed a mutually beneficial agreement on cultural exchange to boost tourism at both places. If you visit the website of the real Hallstatt, it mentions the Hallstatt in China. The copywriter was still smarting about the duplication though, it seems, because there is a pointed allusion that only in their town can you experience their truly unique culture. 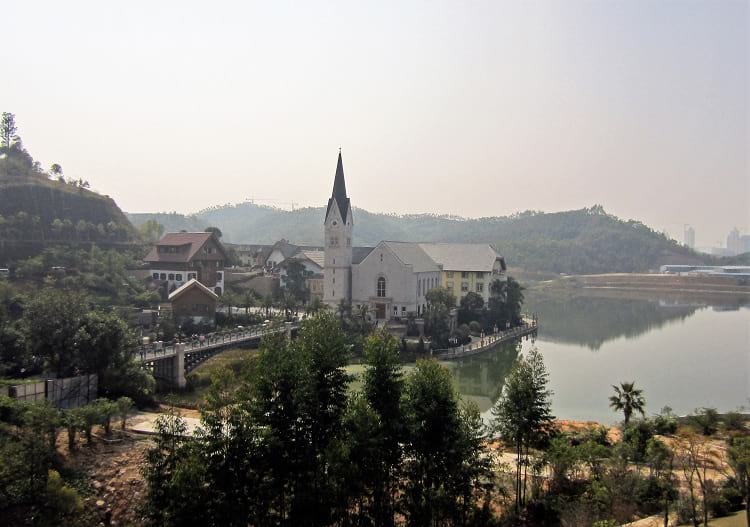 Unlike the real Hallstatt, the Chinese Hallstatt is a high-end residential project, but it is attracting tourists as much as the real place. Not residents on the same scale though. As with the other replica towns, the residences here have gone to mainly wealthy Chinese buyers. As few of them appear to have plans to live here on a permanent basis, the new town lies empty most of the time and has become yet another Chinese ghost town.

The future of the Chinese replica towns

If you scour the Western mainstream media, you will come across an almost general gloating over the fact that these towns currently remain mostly unpopulated. Aside from the fact that gloating over other people’s seeming misfortune is not a very nice thing to do, it is far too soon to gloat. From the way China has been developing economically in recent years, it is quite possible that its real estate market will pick up once again. The replica towns will then find more buyers and the Chinese middle-class will have beautiful environs to raise their children in.

In parting though, Chinese builders ought to consider building reproductions of ancient Chinese towns with the marvellous Chinese architecture we see so often in Chinese historical dramas. They are more suited to the landscape and the climate.

Enjoyed this article? Also, check out “Monowi, Nebraska: A Village in Boyd County, United States with a Population of One“.

Previous Article
The Morbid History of Death Masks
Next Article
Mapogo Lions: The Six Legendary Lions That Meant ‘Bloody’ Business in Their Quest for Dominance