Bibi ka Maqbara: The Taj of Deccan, Which Like the Original, Tells the Tale of Eternal Love Out of the seven wonders of the modern world, India proudly hosts and boasts of the Taj Mahal in the city of Agra. But did you know that there is another lesser-known monument in the country that is a spitting image of the world-famous Taj Mahal? The Bibi Ka Maqbara in Aurangabad bears a striking resemblance to the original ‘love memorial’ as far as its external appearance goes. Not only that, it also has a similar back story, involving a grief-stricken Mughal emperor and his deceased wife at the centre, which has now become a part of all the tales that tour guides narrate on a visit to this place.

Bibi ka Maqbara is situated in Begumpura, just eight kilometres away from the culturally rich and historically important city of Aurangabad in Western Maharashtra. The magnificent doppelganger of the Taj Mahal in all its glory stands testimony to the fact that architecture played a vital role during the Mughal era. Although the city of Aurangabad is more famously known for its 2nd century BCE caves of Ajanta and Ellora, it is also slowly gaining more prominence as a tourist hub, owing to this 16th century Bibi ka Maqbara. Vacationers from all over the world gather at Begumpura to see this glorious memorial, which is also called the Taj Mahal of the Deccan. Bibi ka Maqbara, which literally translates to ‘Tomb of the Lady’, was commissioned by the last effective Mughal ruler Aurangzeb in the year 1660. It was erected in fond memory of his first wife Dilras Banu Begum. Princess Dilras Banu was the daughter of Persian Safavid dynasty prince Mirza Badi-uz-Zaman Safavi, who was later named the viceroy of Gujarat. Dilras Banu married Mughal prince Mahi-ud-din, who upon his ascension to the throne became known as Emperor Aurangzeb. Their matrimonial union took place in the year 1637 on May 8, amid much fanfare and grand celebrations in Agra at the residence of Mirza Badi-uz-Zaman Safavi, also titled Shah Nawaz Khan. After the couple’s time in Agra, the imperials returned to Aurangabad in Deccan, where Dilras Banu, who had now become the chief consort of the emperor, bore him five children – three girls and two boys – after almost four-year-gap periods.

Princess Zeb-un-Nissa was the eldest royal daughter, followed by Princess Zinat-un-Nissa and later Princess Zubdat-un-Nissa. Two princes Muhammad Azam Shah and Sultan Muhammad Akbar were born later after the royal daughters. Since these five children were the issues of his first and most beloved wife Empress Dilras Banu, Aurangzeb favoured them more over his other children from other wives. However, on September 11, 1657, after delivering their last son Sultan Muhammad Akbar, Dilras Banu Begum developed infections, from which she never recovered. A month later, on October 8, she died due to the postpartum fever developed during the complicated childbirth. Shortly afterwards, the eldest daughter Princess Zeb-un-Nissa was given the responsibility of looking after the neonate. 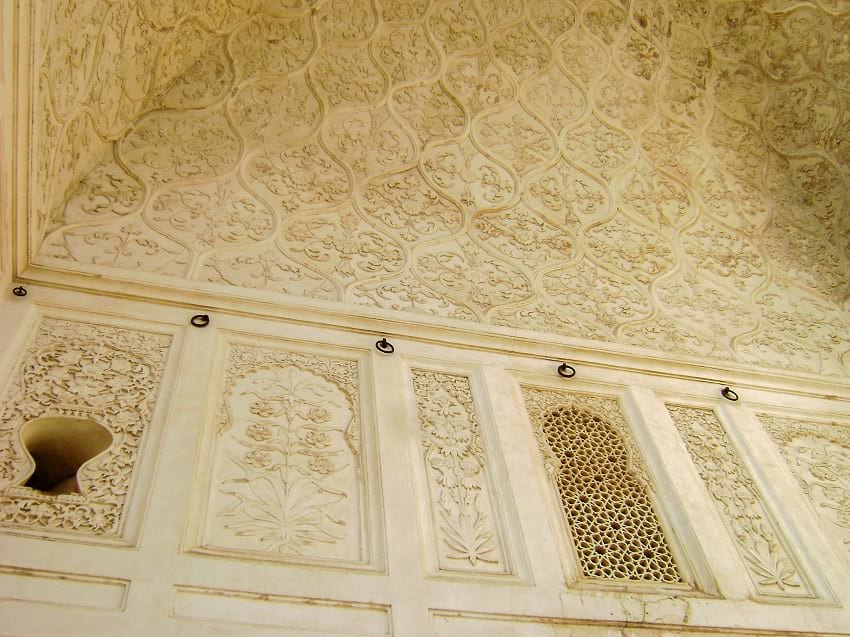 With the sudden demise of his favorite wife at just 35 years of age, the bereaved Aurangzeb set a chain reaction of grief in the family, greatly affecting the elder son Muhammad Azam Shah the most. Three years after Queen Dilras Banu’s demise, in the year 1660 Aurangzeb commissioned the construction of a burial chamber, which would be the final resting place of his wife. Although Aurangzeb is never credited with having built grand structures during his long reign, he made an exception and followed in the footsteps of his father Shah Jahan. In memory of Empress Dilras Banu Begum, who was posthumously given the title Rabia-ud-Daurani, Aurangzeb ordered a mausoleum to be built in Aurangabad, the city named after him. The memorial came to be known as Bibi ka Maqbara, which became the largest monument that Aurangzeb had ever built.

The work on the edifice started in the year 1661 and carried on until 1669, bearing a striking similarity to the famous Taj Mahal, built during Shah Jahan’s reign. Aurangzeb’s mother Empress Mumtaz Mahal had also died during childbirth, much like his wife Dilras Banu; so his father Shah Jahan had built the Taj Mahal as an ode to their love, as Mumtaz’s final resting place. Hoping to rival the Taj, Aurangzeb ordered work on Bibi ka Maqbara to begin just like its more famous and larger, original structure. Attaullah Rashidi, the son of Ustad Ahmad Lahori, the chief designer of the Taj Mahal was hired to work on Bibi ka Maqbara, while Hanspat Rai was the principal engineer, assisting Attaullah in the construction work.

One third in size as compared to the Taj Mahal, Bibi ka Maqbara cost the royal family approximately six hundred and seventy thousand rupees, with necessary construction material coming in from all parts of the country. French jewel merchant and traveler Jean-Baptiste Tavernier during his travels to India, mentioned extensively in his journals about his first-hand account of the material imported for constructing the maqbara. Marble for the monument came in from the mines of Rajasthan, while loads of basaltic rock, sand, limestone and cement (for stucco decorations) were also ordered for its construction.

Built as per the Islamic style of architecture, the construction of Bibi ka Maqbara is based on the Quranic mentions of the four gardens of Paradise. Known as charbagh, the main mausoleum stands at its centre within an area of fifteen thousand square feet in total. The centrally enclosed edifice measures approximately 458 m by 275 m, flanked by axial ponds on its sides. Like the original structure, the Deccani copy is built on a high, square podium, with four minarets on all the four corners surrounding the dome. The main structure can be reached by a flight of steps on three sides just like the Taj.

While Taj Mahal is completely made out of pure white marble, the Taj of the South only has its dome and dado-level walls covered in marble. The rest of the structure above has a fine plaster polish to give it a marble-like appearance. Bibi ka Maqbara, though is not as magnificent as the Taj Mahal, it still is an exquisite piece of Mughal architecture, with a hint of Deccani architecture into its construction. Paler in comparison, Bibi ka Maqbara is almost similar to its forbearer except for one major difference. While the four minarets of the Taj Mahal are shorter than the onion dome, the approximately 72 feet high minarets of Bibi ka Maqbara are taller than the main central dome.

The entire hexagonal complex has its outside walls with arched recesses and bastions, fashioned as per the refined Mughal architecture. The marble on the tomb has intricate lattice screens, while geometric patterns adorn the dome’s canopy on the inside. Floral motifs beautify the interior walls of the structure and foliage designs embellish the exterior part. Finely done brass doors serve as the gateways to the inside of the structure. The entrance is followed by a series of fountains and water channels that are placed alongside the twelve-doored pavilions or baarah daaris. The interior design inside the tomb. (Abhideo21 / Wikimedia Commons)

The mortal remains of the late empress of Aurangabad are placed in a grave below the ground level. It is a low-barricaded, simple, octagonal structure, which is enclosed in elaborately designed marble screens on all sides. Stucco paintings and inscriptional Arabic patterns decorate the surrounding of the cenotaph. The underground grave of the empress is covered with a silk cloth, which is open for the tourists to see during visiting hours at Bibi ka Maqbara. Although the board at the entrance of Bibi ka Maqbara today credits Aurangzeb’s son Muhammad Azam Shah as the builder of the edifice, it was actually Aurangzeb’s original idea. Muhammad Azam Shah would only have been eight years of age when work on the structure began, possibly not sure what all of it actually meant. Azam Shah was only put in charge of overseeing the construction of the monument and its repair work on his father’s instructions later on in his life. While the war for the ascension to the throne of Agra was on between the sons of Shah Jahan (with Aurangzeb winning it), Aurangzeb was mostly away from his seat in the Deccan, leaving the construction work to Azam Shah only for namesake.

Bibi ka Maqbara might not be a world-renowned mausoleum, or might be called the ‘poor man’s Taj’ or even a cheap copy of the monument dedicated to love, but the towering structure in Aurangabad, erected in memory of Aurangzeb’s wife, continues to carry forward a legacy that is left behind by the Mughals in the southern part of the country.

Enjoyed this article? Also, check out “The Mahabat Maqbara and the Extraordinary Tomb of Bahar-ud-din Bhar“.