Reynisfjara: The Black Sand Beach that Looks Straight out of a Gothic Novel Reynisfjara quite literally means ‘Reynir’s beach’. The Black Sand Beach was named after Reynir, a wealthy man from Norway who had settled in the region back in the 18th century.

Most beaches have white sand, and they are formed due to the corrosion and breaking down of light coloured minerals, rocks, and stones. The beaches form when these tiny sand particles are washed away from the parent rock by the oceans and deposited on the edges over the years. Akin to white sand beaches, black sand beaches actually form in a very similar way, but the source of the sand particles are volcanic rocks. The rivers and streams help in cutting and corroding the volcanic rocks. As they gradually reach the ocean, the strong currents do the rest of the work and granulate them further. The sand grains get sediment on the beach as each wave hits the shore. There are also certain rare instances when the lava directly hits the ocean, and upon the sudden change of temperature, erupt into multiple sharp shards. These shards thereafter go through the same process of granulation and meet their inevitable fate of becoming sand. The sand is almost always pitch black in appearance. This is because of the fact that it is located in one of the wettest and heavy-perspiration areas of Iceland. Since it’s always raining and foggy in the area, the sand doesn’t get a chance to dry up and takes a greyish look to it. 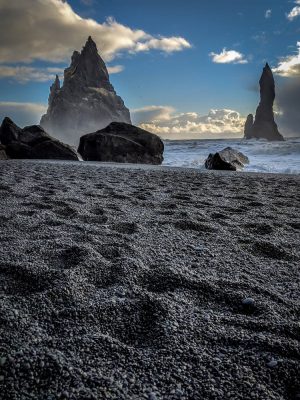 The beach has multiple facets that add up to its value and appeal. Apart from the beautiful black sand, that contrasts with the pearly foam from the ocean the area is also home to many active and dormant volcanoes. In fact, most of Reynisfjara Beach’s physical attributes are a contribution of these volcanoes itself. One of the most famous and photogenic areas of this beach is the Gardar, an area filled with multiple columns that are closely packed. These structures are mostly made of Basalt and other volcanic rocks. The fractures form as a result of instant cooling down of the magma, as the outside shell cools instantly, but the insides take a much longer time. Upon the gradual cooling of the core, the outside surface becomes ridged and fractured, that give it the appearance of closely packed columns on the sea bed. 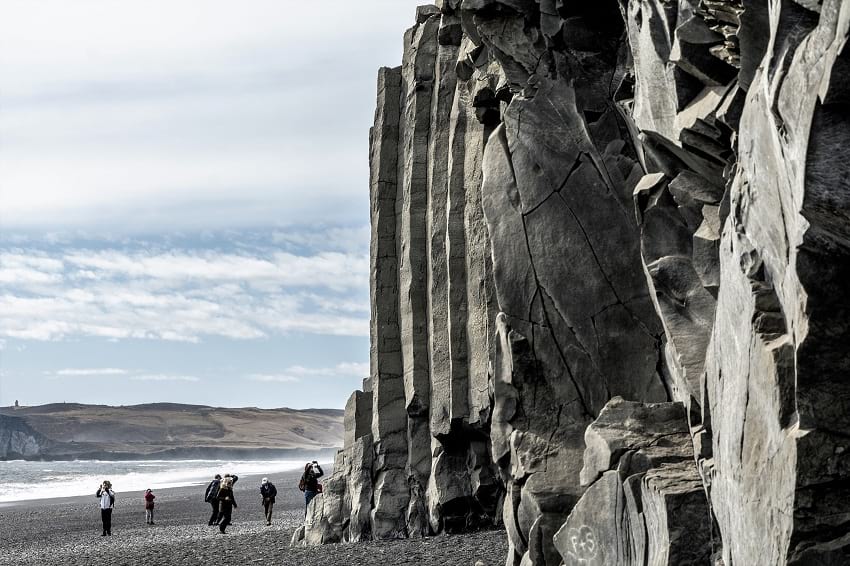 There are natural caves on the Beach that have been carved out by the sea. The ferocious tides and currents of the Atlantic Ocean managed to corrode the big rocks in such a way that it had formed into beautiful caves.

Fauna at the Reynisfjara

As mentioned previously, Reynisfjara Beach has formed off volcanic ashes and rock particles for the most part, and consequently, there is a scarcity of flora and fauna in this region. There are, however, some traces of animal life in that area. Birds are the most abundant of creatures that live in this area, making nests on the top of the hills. Puffins are quite a common sight in the region. Apart from this, and there is the usual abundance of sea creatures that thrive in the frigid Atlantic waters.

Is the Reynisfjara beach dangerous?

Owing to its geographic location, this Beach has proved fatal to many tourists. The extreme currents and tides of the Atlantic Ocean, coupled with the sudden drop of height, make this an extremely dangerous beach. Tourists are under strict surveillance and have been advised against going too close to the ocean.

Elves and trolls: Folklore around the Reynisfjara

The Reynisfjara Beach with its rare and mesmerizing scenery has left many people awestruck and intrigued, and it is needless to say that there are folklores built around it.

Some of the most interesting ones are those about trolls and elves. It is believed that one time, a few trolls had attempted to pull a ship ashore, but they did not realise that the sun was coming up. Engrossed in trying to pull the ship ashore, they worked till dawn, and the sun came up. As the sun touched their skin, they turned to stones and became the stones that we now see in Gardar. There have been stories built around elves as well, who had somehow turned into the rugged basalt columns on the Beach. These stories have become an intrinsic part of the local folklore and have been passed down the generations.

Reynisfjara Beach was used as a filming location in the famous HBO show, Game of Thrones. The world presents us with a host of marvellous natural creations and mesmerising scenes- from the Pink Lake of Australia (Lake Spenser) whose salt content makes it look like it is filled with strawberries, to the Reynisfjara Beach with its inky black sands. The Beach manages to leave all its visitors awestruck, acting as a stunning amphitheatre to host the performance presented by the roaring oceans.

Enjoyed this article? Also, check out “Playa de Gulpiyuri: The Tiny Beach in the Principality of Asturias in Spain.”

Previous Article
The Bedouin People: A Desert-Dwelling Tribe That Has Preserved Its Age-Old Traditions for Many Centuries
Next Article
Clever Hans: The Einstein Horse That Could do Math