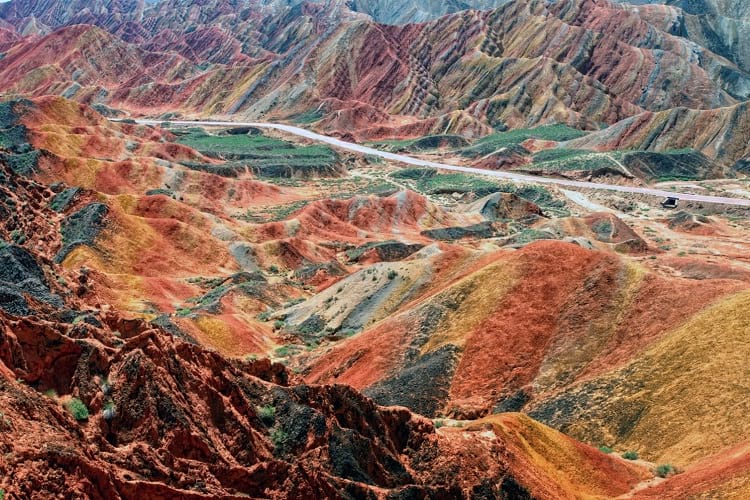 Zhangye Danxia Landform Geological Park is located in the Gansu province of People’s Republic of China. Sprawling over an area of over 200 sq. miles, the park houses a rare geographical feature which draws attention worldwide. The colours on these mountain ranges appear as if they were painted. Danxia, which means ‘rosy cloud,’ is an appropriate name given to this landform seen in China. The Rainbow Mountains belong to Cretaceous era, much before the formation of Himalayan Mountains. The Cretaceous sandstone depositions present in China contained high concentrations of iron and trace minerals that formed the basis of these colours that appear today. About 55 million years ago, the Eurasian plate struck the Indian tectonic plate which led to the formation of the Himalayas and these Rainbow Mountains.

The layered arrangement and horizontal stratigraphy were disrupted by the collision that elevated these hidden sedimentary rocks from the bottom of the Earth. In due course of time, weathering and erosion removed the overlying layers of siliciclastic rocks and brought out the underlying, distinct formations with different mineralogy and chemical composition displaying the striking colour difference seen in the mountains today. 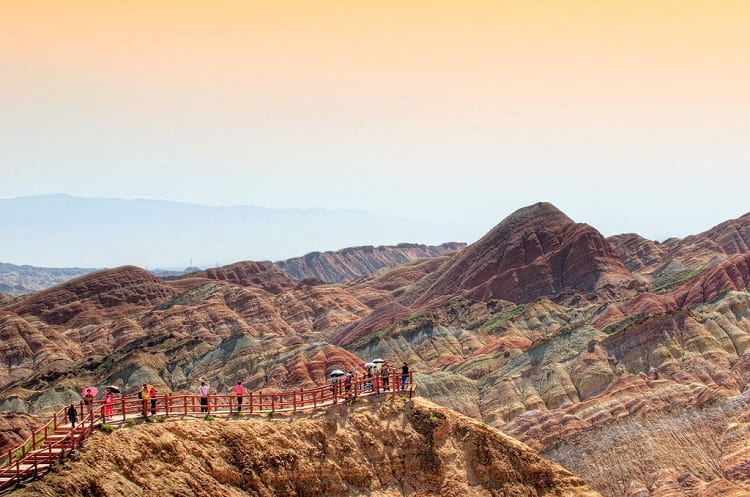 The primary deposition found in the area is deep-red sandstone. The red pigmentation of the sandstone is because of iron oxide coating and cementation. Cementation refers to the process in which the pores present between the grains of a constituent are sealed due to a precipitate buildup, binding the grains together in that place. The iron oxide, also known as hematite, is lodged between the grains of the sandstone giving it a deep-red colour. The formation of this iron oxide can be attributed to weathering and a reaction due to exposure to moisture and oxygen, similar to rust. However, a minor change in the chemical composition may cause the variance from the characteristic deep-red colour of sandstone. For example, oxidized limonite or goethite results in yellow or brown staining in sandstones, whereas the presence of iron sulfide imparts metallic yellow colour and chlorite or iron silicate clays forms the green colour. Hence, the upliftment of mountains and formation of deposits of several other salts, coupled with weathering and erosion for millions of years led to the formation of this spectacular Rainbow Mountains that we see today. However, Rainbow mountains form only one part of the whole Danxia landform.

Other attractions at Danxia landform

The Danxia landform is unique to China that can be observed prominently in the sub-tropical region of south-east China, within a crescent-shaped arc that approximately extends to 1700 kilometres. It comprises six regions:  Langshan, Danxiashan, Longhushan, Chishui, Taining, and Jianglangshan. The Danxia landform was listed as a World Heritage Site by the UNESCO in 2010. Structures such as peaks, towers, cliffs, valleys, and arches made of deep-red sandstone rock by natural factors is a unique characteristic of the Danxia Landform. The nearest airport to this natural wonder is in Zhangye City, facilitating the tourists interested in visiting the rainbow mountains or the other parts of Danxia landform. The view is at its best when the sun is fully out with no cloud cover, especially at sunset. Between 6:30 pm and 8:00 pm, the colours attain additional shine and contrast, due to a perfect mix of shadows and light. The officials of the national park provide a bus which moves from one viewpoint to another and tourists are advised to stick to these locations specified by the officials. The ideal time to visit would be summer, between the months July and September, as the best amount of sunlight strikes during this period.

Enjoyed this article? Also, check out “Wave Rock: Where a Massive Prehistoric Wave, Just About to Break, is Etched Permanently in Stone“.