Solving the Mystery Behind the ‘Sailing Stones’ of Racetrack Playa 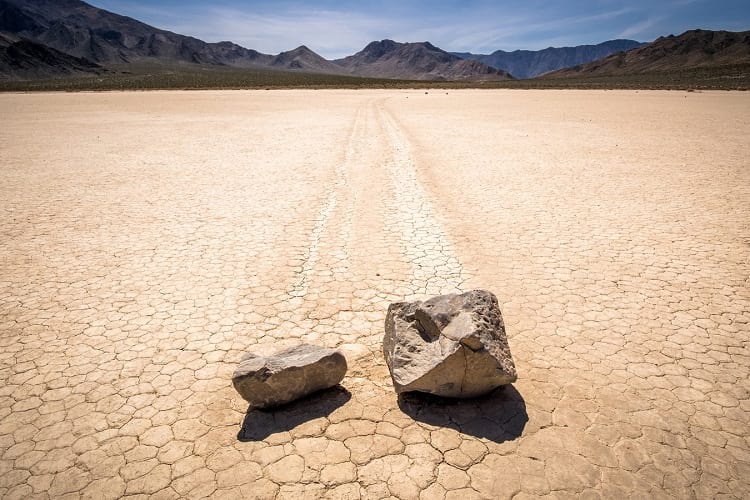 A rock that has left its trail in Racetrack Playa. (Giuseppe Milo / Flickr)

Racetrack Playa is a dry lake bed situated in Death Valley National Park, in the state of California, USA. It is a home to a rare and distinctive phenomenon. The rocks situated on the dry lake bed are found with long trails behind them, suggesting that they moved from one place to another mostly by sliding.

The trails appear to point in the direction that the rocks move involuntarily. Usually, no tracks leading to, or away from, the rocks are found, which eliminates any animal or human influence. Rocks weighing as heavy as 600 pounds (272 Kgs) were found to have moved.

The surface of the flat lake bed is made up of silt and clay, which gives rise to a large volume of mud cracks as the conditions in the area is mostly dry. It is situated in a region with an arid climate, with the average rainfall of barely two inches a year. The mountains surrounding the Playa produce runoff because of the rainfall, which is accumulated on the playa, making it a small and shallow lake. The floor of this lake, naturally, becomes very soft and contains slippery mud, providing the perfect conditions for the rocks to relocate.

This possibly involuntary movement of rocks stoked the flames of different kinds of speculation. Theories have suggested the involvement of hurricane-force winds, rocks being carried away because of ice, or, inevitably, supernatural elements.

Theories and findings of Sailing Stones

Movement because of hurricane-force winds was the most favoured explanation, which was assumed to be a culmination of a unique set of circumstances. However, that theory was debunked based on the fact that these heavy rocks were embedded into the lake bed and wind alone would not have been sufficient. No one had scientifically verified any of the above theories until Richard Norris, and his cousin James Norris managed to record the movement of the rocks in December 2013. 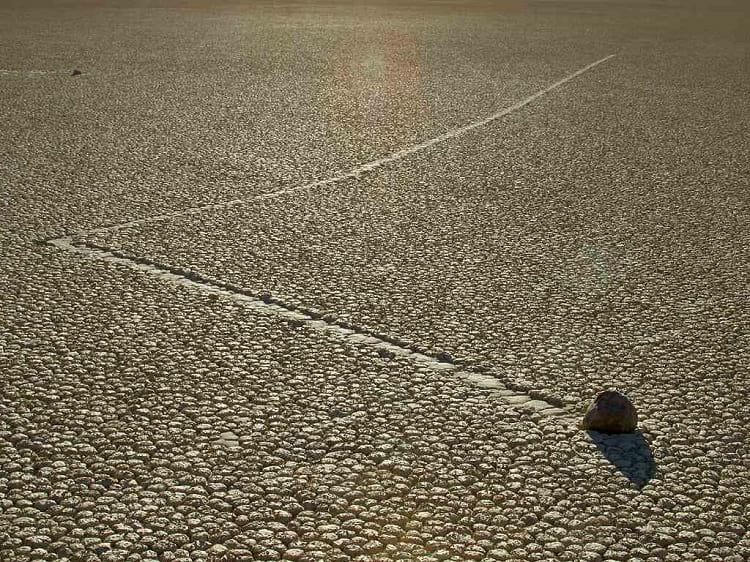 Geologists have studied these rocks since 1948. Eventually, it was proved that this movement of rocks is due to the development of ice on the lake, and several other factors. First, the playa must turn into a shallow lake due to rains in the parched climate. Then, temperatures must fall low enough to form a thin layer of ice on that lake. In the end, the wind should blow with enough strength such that this thin ice breaks into floes and subsequently slide the rock across the water underneath the layer.

The Norris brothers, however, subscribed to the hurricane-force winds theory. The theory of ice floes isn’t new. Prior to the research by Norris brothers, a researcher named Ralph Lorenz from the John Hopkins University has made attempts to investigate the phenomenon. He had placed time-lapse cameras in the area. These cameras, unfortunately, couldn’t obtain a conclusive proof regarding the theory.

Richard Norris, the elder of the Norris brothers, is a paleobiologist at the Scripps Institution of Oceanography, and James Norris is a research engineer. “Slithering Stones Initiative” was launched by the Norris brothers in 2011. A weather station in the region was installed by them over a period of two years and equipped 15 stones with GPS devices which enabled them to record their movement and velocity.

Owing to a genuine stroke of luck, they managed to watch the stones move in December 2013 when they had actually come to check the readings on these GPS embedded stones. They published their findings in a journal called “PLOS ONE.” James remarked that he was “amazed by the irony of it all” that “In a place where rainfall averages two inches a year, rocks are being shoved around by mechanisms typically seen in arctic climes”. The movement of the rocks was slow with the speed of the rocks being as low as 15 feet per minute. The direction of the rocks is determined by the wind. Hence leading to paths intersecting each other. (Gregory “Slobirdr” Smith / Flickr) 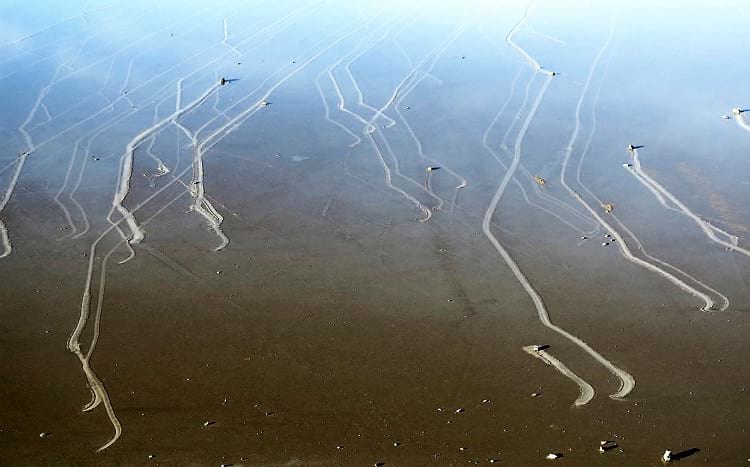 They concluded that the occurrence of the motion of the rocks is extremely rare and the weather conditions that are required for the phenomenon are highly specific. Hence, the mystery of sliding rocks stands resolved, thanks to the Norris brothers’ research in 2013.

Previous Article
Ever Heard About the Darvaza Gas Crater That has Been Burning in Flames for the Last 50 years?
Next Article
Sky Burial: The Ritual of Feeding the Dead to the Vultures