The Time When Men Fought Bears A man and a bear wrestling. (R. H. Trueman / Library and Archives Canada)

Who in their right mind would like to fight a wrestler standing more than 7 feet and weighing 600lbs? No, I’m not talking about pro wrestlers like Big Show and Mark Henry. Though I’m quite sure nobody in their right mind would ever fight them either. But imagine, what if this wrestler was a grizzly bear? You would definitely run away from it. But to our amazement, there have been men who have fought actual bears in four-cornered rings, not out in the wild and not just for the sake of their survival. And this is not an isolated incident that we are talking about here, but actually, it was in fashion for quite a few decades, probably for more than a century.

The bears which were fought with would undergo gruesome physical modifications, they would be declawed, their teeth would be removed and their mouths would be sealed with a muzzle strap. In some cases, the bears had their leg and arm tendons severed to restrict their mobility. You can probably understand why it’s not a thing anymore. It was a gruesome practice that exploited wild animals for the purpose of entertainment of people.

Men have a history of trying to prove his superiority over other animals, especially the ones that most definitely would kill him out in the wild with absolute ease. This has led to his fighting with alligators, sharks, bears, kangaroos, octopi, and even lions (under conditions favourable to man). 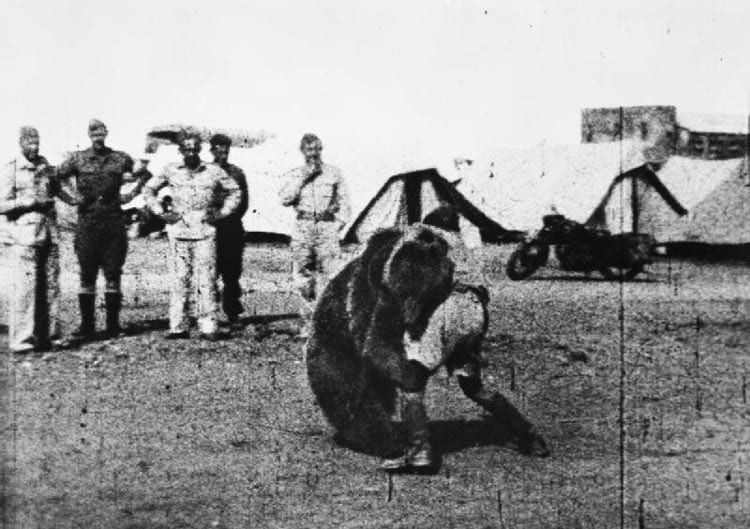 A soldier from the Polish Second Corps play wrestling with a bear named Wojtek while other members of the troops can be seen spectating the event. (Imperial War Museum / Wikimedia Commons)

Let’s come to bears now. Bears are unique in a way. When it comes to boxing or wrestling they stand upright just like we do. When they wish to fight, even among themselves, they do it like “men”. There is a rich history of men fighting bears and its origins can be traced back to 1850s Europe. It eventually showed up in America in 1877. Soon they were everywhere, most circuses featured bears fighting bears or bears fighting men.

Reporters were writing about their performances, sometimes unimpressed by their lack of discipline or their lack of skill as boxers and wrestlers. In 1878 a female fighting bear named Lena killed a fighter by the name of Jean Francis Borne during a “match”. Contrary to what you would think that didn’t really deter people from taking part in this “sport”.

Numerous bears like Terrible Ted, Big Boy, and Gorgeous Gus enjoyed big fame as distinguished fighters. Another famous fighting bear called Battling Bruno was recognised for his achievements by Queen Victoria and was granted the title of knighthood. When he passed away he was stuffed and preserved on her request.

A bear named Victor, probably the most famous and successful fighting bear of all time, appeared on numerous TV shows and most famously he fought Chet Coppock, a sports director with CBS, during the halftime show of an ABA game on April 2, 1975.

Also, boxers like Chuck Wepner, the heavyweight boxer who inspired the character of the famous Rocky tried his hand at bear fighting at the zenith of this “sport” but public’s interest in this “sport” has since waned thanks to the rise of animal rights.

Though there have been reports of a few cases of bears fighting men for fun and entertainment from as late as 1995 when a club in Ohio came under fire for letting drunk college students fight a bear named Ceaser, it is thankfully a dead sport today.

It is different when you have to fight a bear out in the wild to save yourself from being killed. He has all the tools that nature has provided him with for his use and you have all yours. Fortunately, for us, the times are gone when men fought bears.