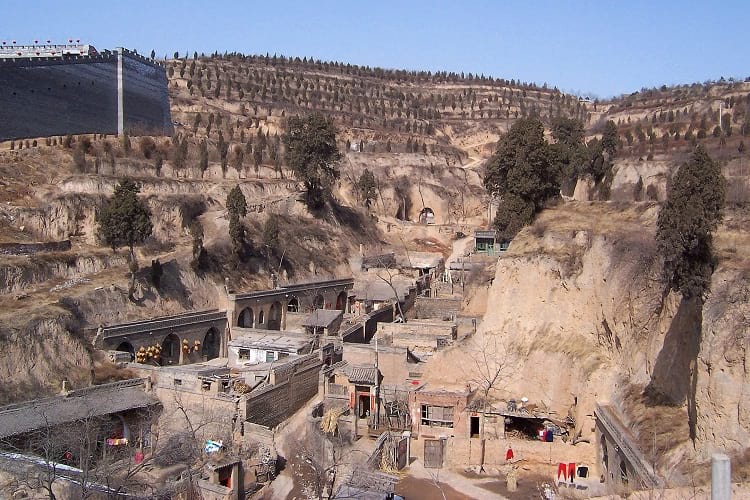 Ever wondered what it might feel like to live in a cave? Well, you don’t have to take a time machine back to the prehistoric era. Just head over to Shaanxi province in China and get a first-hand experience. More than 30 million people in China still live in cave dwellings, and it is particularly commonplace in the Shaanxi area. Given the climate of the region—very cold winters and very hot summers — living in caves is ecologically and economically sustainable. 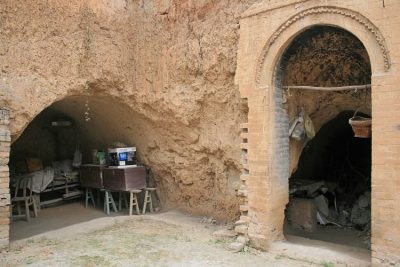 The exterior of the cave house. (Gary Todd / Flickr)

The cave dwellings in Shaanxi province are known as yaodong in the Chinese language. These are man-made caves, not naturally occurring ones, but they do align well with the natural terrain.

The Loess Plateau of Shaanxi is notable for its soft, yellow soil that is relatively easy to excavate. Taking advantage of this, the local people began the practice of excavating caves on the slopes on the hillsides or in the valleys. One of the main advantages of this was that it freed up the level lands for agricultural purposes.

The yaodongs are, on the whole, stable structures, and many of them have withstood earthquakes over the centuries.

The first yaodongs, according to existing Chinese historical records, were built around 4000 years ago in Northern China. The Xia Dynasty, which ruled from 2100 to 1600 BCE, was in power at the time. Yaodongs became more well-designed and widespread during the Ming Dynasty, between 1368 and 1644, and the Qing Dynasty, between 1644 and 1912.

Other types of cave houses in China’s Shaanxi Province

Apart from the caves in the hill or valley slopes, people also build yaodongs in flat areas in square-shaped pits that they first excavate in the ground. The pits may be five to eight meters in depth. The yaodong is excavated in the wall of the pit and the rest of the area is used as a sunken courtyard. Some people also build stand alone yaodongs. They built an arched framework of stone or bricks and use soil to build a flat, thick roof.

The traditional structure of the Yaodong

The original yaodong consisted of a semi-circular entrance and a single long hall with a width of three to four meters and a depth of six to eight meters. The hall often has a vaulted ceiling and a sleeping platform known as kang. This latter is made from damped earth and it is usually built over the space for the cooking fire. 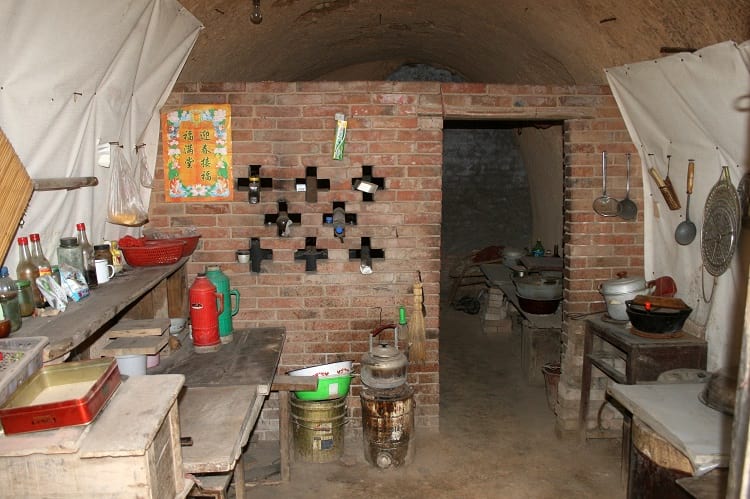 Many yaodongs have yards in front that are surrounded by mud walls. The inhabitants can relax and catch some sun in these yards, raise a small garden, and use it for washing, drying clothes, and cooking.

Traditional yaodongs, while keeping their inhabitants safe from the weather, are often rather primitive. The interior is gloomy as the only source of natural light is from the semi-circular opening in the front. This opening is covered with rice paper or colourful rugs and, so, lets in limited light. For more illumination, the dwellers have to depend on candles or on the hearth fire.

People also have to use external outhouses or do their business in chamber pots and empty these outside later.

These days, only a few yaodongs have retained all their traditional trappings.

Most people, who still live in yaodongs in Shaanxi province, have modernized their cave dwellings. The yaodongs now have brick and concrete reinforcements, and some may extend outwards with attractive facades. Additionally, these modern yaodongs have indoor plumbing with running water, tiled bathrooms, and well-installed kitchens. They also have electricity and modern appliances like TV, computer, refrigerator, washing machine, air-conditioner, and more. Some of these yaodongs are, in fact, quite on par with many luxury apartments.

Economic and ecological advantage of Yaodongs

The principal advantage of yaodongs is that they suit the climate of Shaanxi province. The thick soil encasing of the yaodongs offers them excellent insulation. The local people call it ‘Dong Nuan Xia Liang.’ In wintertime, the soil retains heat and it is, therefore, warm and cosy inside the cave. On the other hand, in the summertime, the soil cools down and ensures that the cave interior remains bearable. Thanks to this natural insulation, people living in the yaodongs don’t generally need to install coolers or heaters and can thereby save on energy costs.

Furthermore, excavating the caves is inexpensive and the materials used for its further construction —wood, stone, brick, etc —are natural and locally found or locally made.

Famous Chinese people who have lived in caves

In the 1930s, the Chinese communists carried out their famous retreat, known as the Long March. At the end of it, near Yanan, Mao Tse-tung and his associates lived in yaodongs for quite a while. They even set up the classrooms for their Red Army in the yaodongs. The writer, Edgar Snow, mentions this in his book “Red Star Over China.” According to him, they used stones and bricks to make desks and chairs for the students and clay and limestone for the blackboards and walls.

Before he became the President of China and one of the most powerful men in the world, Xi Jinping endured a great many hardships. His father had been one of the leading communist revolutionaries and had also been the Vice Premier of China. However, during the Cultural Revolution in China, his father fell from political grace, and as a result, both the immediate and extended Xi family suffered. Shunned everywhere for being his father’s son, it seemed that Xi Jinping was not going to have a bright future in the CCP in Beijing or elsewhere. His father sent him to Liangjiahe, a remote village in Shaanxi province, and he lived there in a yaodong for seven years.

Tourists can now view the cave in which Xi Jinping lived, but don’t expect to get any juicy gossip. Given the widespread interest in his life, the Chinese government has now instructed the inhabitants of Liangjiahe village to not talk to journalists or outsiders about Xi Jinping’s sojourn there. Even so, some of the elderly villagers have let it be known how impressed they were with the young Xi Jinping—he was only 15 years old when he arrived at the village—and how he lived as well as was possible in a yaodong with almost none of the current modern amenities.

The cave houses in Shaanxi province are all in the rural areas. Most of them have been in the same families for generations and it is likely this trend will continue. Economic development in Shaanxi province has enriched many of its inhabitants, so they don’t need to sell their yaodongs and have, in fact, been able to modernize them into luxury dwellings.

However, as more and more people move to the cities for work, education, and other lifestyle reasons, they end up buying or renting apartments there. Many of the rural yaodongs will then be relegated to a weekend or holiday homes. Only some of the older generation will live in them on a full-time basis. These include those who never left their rural homes and those who decided to return after many years of living in urban apartments.

In any case, very few are available for rent or purchase. People prefer to hold on to their traditional homes. Moreover, if any are available, the rents or prices are generally very expensive. Some yaodongs are available for as low as $30 per month, but these are the primitive types without any plumbing and electricity.

Aside from Shaanxi province, you can also see yaodongs in Gansu and Henan provinces.

Enjoyed this article? Also, check out “The South China Mall: Why Did the Largest Mall in the World Fail?“

Previous Article
The Concorde Jet: The Golden Run and Tragic Fall of the Legendary Aircraft
Next Article
Rain of Animals: A Rare Scientific Phenomenon Where Animals Seem to Fall from the Sky Inexplicably