Transylvania: Home to Dracula, the Barbarians and the Path Breaking Architecture A geographical region in the Roman Empire (27 BC- 476 AD) was ruled by Hungarians, and the barbarian tribes of Huns (Asian origin) and Saxons (German origin) in the 11th century. It became part of Romania after the First World War, inspired ‘Dracula’ novel in 1897 and saw mutiny in 1989. Thanks to its cultural intermixing, medieval looks and spooky buildings, it’s now a popular tourist destination. We are talking about the Transylvania region of Romania in South-eastern Europe.

A bone of contention for long

Transylvania is surrounded by 3 mountains: Carpathian, Transylvanian Alps and Bihor. The Hungarians (Magyars) conquered it in 1003 AD. Thereafter, for many centuries, it thrived as an autonomous unit, until the invasion of Mongols in 1241. It became independent after Turks defeated Hungary in 1526. In 1566 Hungary was divided between Habsburg (Royal German family) and Turks. That brought Transylvania under Turkish suzerainty. Hungarian revolution of 1848 separated Transylvania from Hungary, but the two became one again in 1867. In World War I, following the defeat of Austria and Hungary, Transylvania got united with Romania. The allied forces recognized the union in 1920. In World War II, Hungary regained a part of Transylvania but ceded it to Romania in 1947. In 1989, they overthrew the communist rule in Romania.

Throughout these trials, Transylvania, in popular perception, remained a haunted place. A place where the spirits of the dead rose from their graves and sucked the blood of unsuspecting humans. Its creepy image reached a high with Bram Stoker’s novel ‘Dracula’ published in 1897. The novel blazed a trail of horror stories based on Transylvanian folklore.

The word Dracula is derived from ‘son of Dracul’. The phrase implied Vlad the Impaler (real name Vlad Tepes)–son of the 15th-century nobleman Vlad II Dracul. The word Dracul in Romanian means ‘the devil’, which contributed to Vlad’s reputation. Vlad Tepes was the king of Wallachia (now in Romania) and notorious for cruelty to his enemies. He would decapitate, eviscerate, impale and boil alive his enemies to give out a deterrent message. In 1462, when Ottoman (Turkish tribe) invaded Wallachia, he hoisted as many as 20,000 invaders on spear shafts; the stab passing through their body flesh, giving them a painful slow death. As the bodies writhed in pain, Vlad, the ‘son of Dracul’, wined and dined in their midst, even tasted their blood as part of his macabre revelry. This historical account inspired the character Dracula in Bram Stoker’s novel.

Apart from Vampire stories, Transylvania is known for its unique architecture. There are a good number of villages in Transylvania showcasing Saxon (a German tribe) architecture in full glory. Each village has a church that doubles up as military base (medieval forts of Europe).

Prejmer, a commune of three villages, is home to the most typical and largest fortified church in the region. It is fortified with 10 feet thick and 40 feet high walls. Interiors were designed to serve as food depots during peacetime, and shelter in war condition. Rooms inside were earmarked for every family home in the village, so that in an emergency, all knew which room to move into. People could stay put the church for several weeks, with children continuing with their studies in make-shift school in the same premises. Apart from this, the Saxon forts were also used as hubs of trade and industry in peaceful times. Bran Castle is another popular fort, famed for its creepy looks. Moving on roads in Transylvania gives you a feeling of travelling back in time. It is a 100-years-back spectacle of dirty roads, horse-driven carts and hoards of sheep being driven to pasture. Transfagarasan road though is an exception. Situated on the Fagaras Mountains, it is an amazing zigzag road, running over a valley, through a 900-meter tunnel, into the forests of Wallachia. Seven Saxon villages find a place in the list of UNESCO World Heritage Site as milestones of gothic style architecture (13th to 16th century). Gothic architecture was a revolution of sorts as it created a multiple support system for the roof. Earlier, the entire weight of the roof rested on the 4 walls, which had to be commensurately thicker as the size of the building increased. Ribbed vault, flying buttresses and pointed arches were the support systems which took away much of the roof-load from the 4 walls of the building. Thus walls could be kept slim even as the area, and the height of the building increased.

Bram Stoker, the author of ‘Dracula’ had described Transylvania as ‘one of the wildest and least-known portions of Europe’. And not without a reason. Hoia-Baciu forest of Transylvania, called the ‘Bermuda Triangle of Romania’, is a weird jungle flush with strange woods. 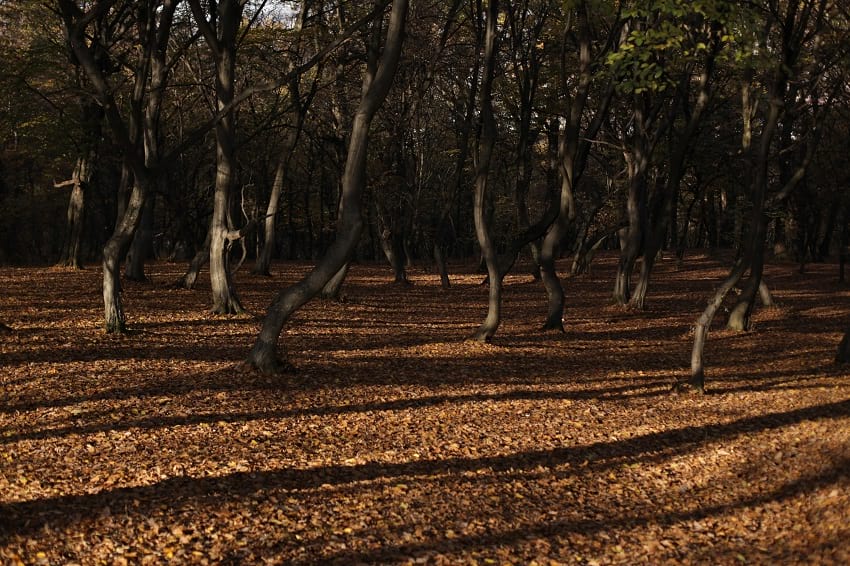 Trees branch out weirdly into intimidating shapes. The tourists report of eerie silence interrupted by sounds of footfalls, with none in sight. Legends say that the forest is possessed by ghosts and evil spirits. A young girl was lost in the forest and returned after 5 years, but could not recall how she lived in the forest. Similarly, a shepherd and his flock of sheep went missing. Tourists have complained of headache and restlessness in Hoia-Baciu. Yet, the forest is a popular hangout for a picnic, adventure, and watching wildlife. Visitors can see wildlife through the hides, specially created for their safety and convenience. The Carpathian Mountains have a good population of wolves, lynx and brown bears.  There are a good number of mineral springs where people go for health reasons.

Alcoholic drink is part of the staple diet

Description of Transylvania is incomplete without the mention of a popular drink called Palinka. It’s a brandy distilled from plumes, although drinks made from other fruits as well. It is gulped in one go before taking the main course of the meal. Apart from routine use, Palinca is also taken on special occasions of revelry and celebrations.

Previous Article
Anabel Loyd’s New Book ‘Bahawalpur’ Documents the ‘Rise and Fall of a Glorious British India Princely State
Next Article
Panopticon: The Ultimate Prison Design and the Theory Around It