Panopticon: The Ultimate Prison Design and the Theory Around It

In the 18th century, Jeremy Bentham, a theoretical jurist and the earliest expounder of utilitarianism, proposed the concept of the Panopticon. The Panopticon was a type of institutional building designed to permit a single security guard to observe the activity of all convicts, without the convicts being able to detect the surveillance that they are subjected to.

The architectural design of the proposed structure consists of a rotunda- a structure which has a circular shape- constructed with glass windows and walls facing the center. In this concept, every cell has a single convict and each cell faces the center where the guards are positioned in a tower. Due to this genius design, security costs would be minimal and it would also leave the convicts open in terms of vulnerability. This would also promote a general improvement of behaviour among them due to the constant psychological pressure of not knowing when or how they are being observed.

The structure and its conception

The name Panopticon was derived from a famous Greek mythological figure named Argus Panoptes– a mythical all-seeing giant with a hundred eyes. While it is widely known that it was Jeremy Bentham’s genius that led to the conceptualization of the Panopticon, very few know that it was originally his brother’s idea that was materialized.

Bentham’s brother Samuel was employed in Russia at the Krichev estate where the workforce was rather unskilled. To supervise them efficiently, Samuel devised a method of placing a table and chair in the center, while the factory workers did their job and he kept an eye on all of them simultaneously. When Bentham went to visit his brother, he observed this technique of supervision and applied it to architectural design, specifically for prisons. This is how the Panopticon came to be.

Wiley Reveley was the architect who sketched drawings for Bentham and materialized his concept of the Panopticon on paper. A statement was made by Bentham regarding the 1843 plans, which quoted the structure as a “new mode of obtaining power of mind over mind, in quantity hitherto without example”. Although Bentham managed to persuade the Prime Minister, William Pitt the Younger, to allocate funds for a National Penitentiary, it invoked a stream of problems due to which the project was later discarded.

Prisons based on the panopticon

The National Penitentiary in Millbank, Westminster, London opened up in 1821, which later came to be known as Millbank Prison. It was the first prison constructed based on Bentham’s ideology. Millbank Prison was marked as a failure due to a lack of cooperation from the convicts. It became controversial owing to the idea that the facility failed to extract valuable labour out of its resident convicts. 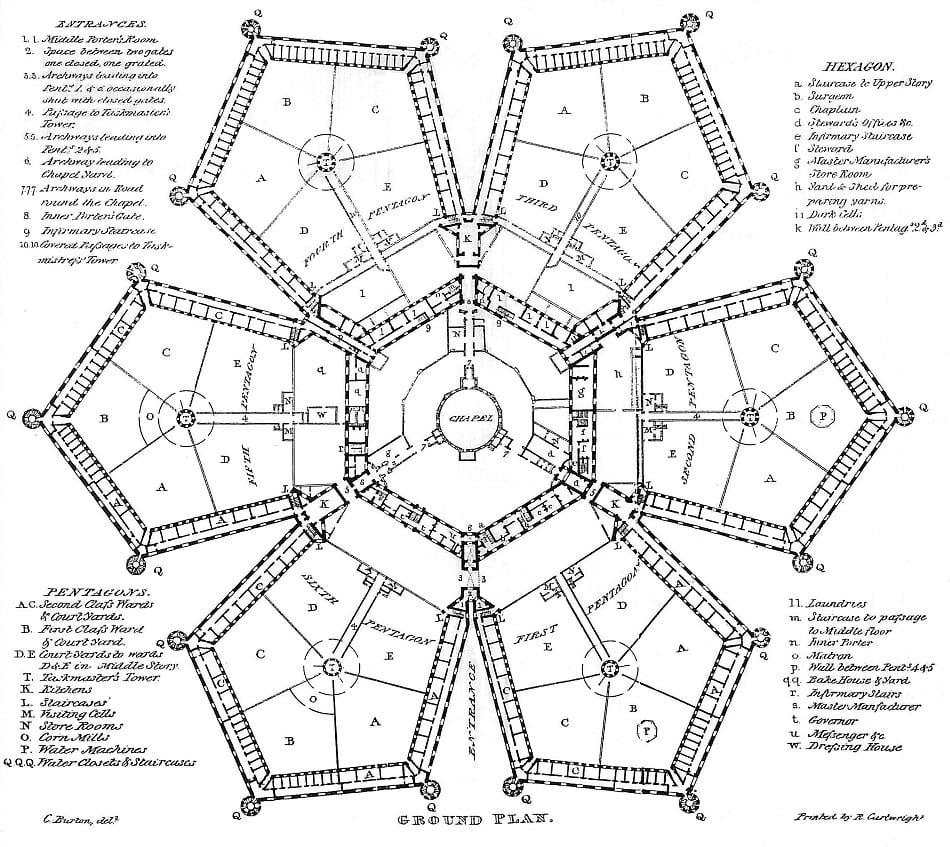 A small prison constructed for women in Lancaster, England by Joseph Gandy, was similar to the Panopticon plans that were proposed by Bentham. The K wing in Lancaster Castle Prison also has strikingly similar features to that of the Panopticon.

The Pentonville Prison in London, England was constructed after Bentham’s death in 1832, and it laid the foundation for the construction of 54 other such prisons in Victorian Britain. Joshua Jebb had reiterated the plans, but also proposed a modification- inclusion of radial prison wings with a central tower for the guards. While Bentham’s concept was for constant surveillance, the new plans did not support the idea of constant surveillance.

Cuban President Gerardo Machado made it possible for the Presidio Modelo on Isla de Pinos in Cuba to be constructed which would implement Bentham’s theory right down to the details. Fidel Castro had also been convicted and sent to Presidio Modelo, whereupon his arrival there was a population of 6000 in a mere 4 floors. This contributed to unhealthy conditions and an overpopulated prison. 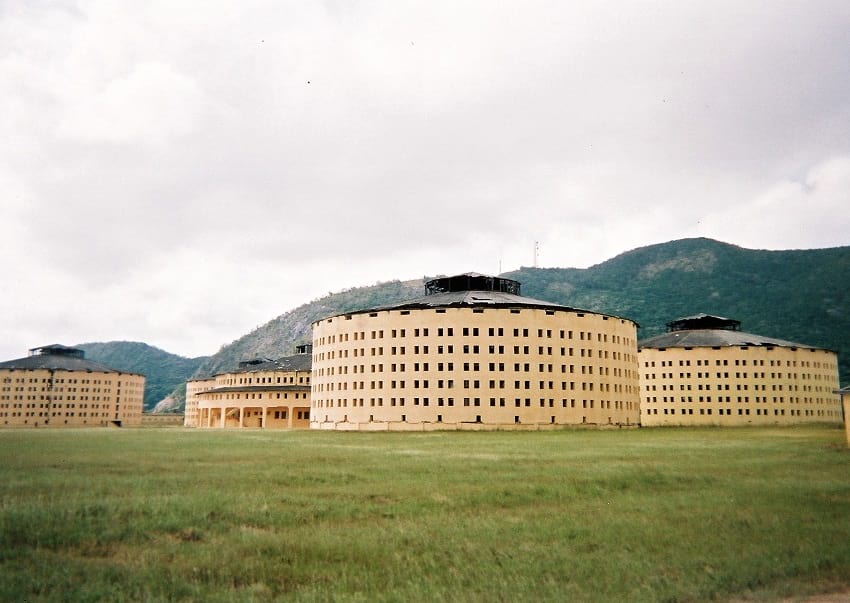 Haarlem, Breda and Arnhem penitentiaries in the Netherlands were historical Panopticon prisons. They had strikingly similar features to Bentham’s design, but failed in the aspect that the guards could not completely observe the convicts at all times. There were parts of the cells that could not be seen from certain angles by the guards. In 2006, a new era emerged with the construction of digitally enabled Panopticon prison- Lelystad Prison. Each of the 150 convicts were electronically tagged and a mere 6 guards were required for surveillance rather than the usual 15.

A French philosopher named Michael Foucault spoke about the Panopticon in his work “Discipline and Punish”. He emphasized the idea of the Panopticon be recognized as a system of power and a tool for political propaganda. Sociologist David Lyon also quoted

“no single metaphor or model is adequate to the task of summing up what is central to contemporary surveillance, but important clues are available in Nineteen Eighty-Four and in Bentham’s Panopticon”.

Another French philosopher Gilles Deleuze observed that the emergence of digital surveillance in schools, hospitals and other such institutions promoted efficient management of production and consumption. Derrick Jensen and George Draffan mentioned Bentham as one of the pioneers of modern surveillance.

The philosophy of Panopticon was applied to new era technology known as Closed Circuit Television Camera or CCTV. A centralized control room enabled security guards to keep an eye on every step of an individual in a crowded area just by sitting in a room. The essence of a digital Panopticon thus came into play in the everyday life of a new age society.

Internet Of Things (IoT), a rather popular concept in today’s digital world, emphasizes the interconnectivity of objects. Each object is connected to the internet. In fact, smart devices are essentially keeping all-time surveillance on every individual. Apple’s Homekit and Google’s Brillo are among the few devices deeply embedded into a wider array of networks that collect information with every passing moment. This creates a pool of data that is monitored by corporations targeting every individual according to their specific needs. GPS-enabled trackers, smartwatches, smart speakers and even glasses. All these devices communicate constantly giving out every piece of information about us.

While everything about these devices seems to amuse us, they give corporations and governments the power to have all-round surveillance on us. The question arises that with the biased governance in the modern world, isn’t the world becoming Bentham’s idea of the Panopticon? Is there a single moment that we are not being watched?

Enjoyed this article? Also, check out “Wind in the Willows: The Singing Ringing Tree“.

Previous Article
Transylvania: Home to Dracula, the Barbarians and the Path Breaking Architecture
Next Article
Coronavirus and Other Deadly Outbreaks of the Past