Nakagin Capsule Tower: A Futuristic Building from the Past, Which Might Just Not See the Future 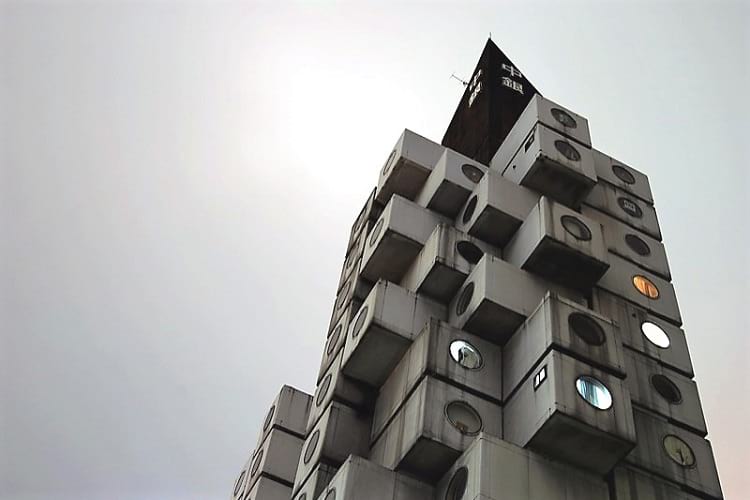 A walk in the classy Ginza district of the Japanese capital of Tokyo can bring a visitor to one of the rare architectural marvels of the world that is now in a very sorry state. Once a wonder and one of the firsts to achieve a specific tag, the Nakagin Capsule Tower, today cries for attention. Designed and built between the years 1970 and 1972 by Kisho Kurokawa Architect and Associates, the tower in Tokyo, was the world’s first structure to be made in a capsule format, serving a dual function. The Nakagin Capsule Tower was made in such a way that it not just utilized compact areas but also served practical living purposes in the littlest of spaces. 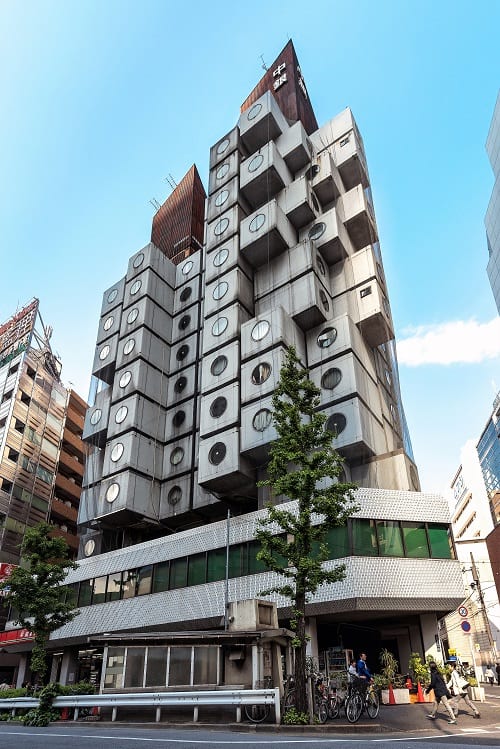 Construction of the Nakagin Capsule Tower

Using steel and reinforced concrete, the Nakagin Capsule Tower has only two central interconnected cores, both of which have eleven and thirteen floors respectively. It was built to occupy a total floor area of 3091.23 square metres, including a basement floor, plus preassembled modular capsules rising above it. Only four high-tension bolts are attached to each of the pods on either ends, which make it easier for the capsule to be assembled into the mainframe or detached from it as and when required. The capsule tower was built mainly to serve travelling businessmen, who would stop for the night and prefer places meant for a single person’s use. The futuristic pods could also be converted into a home for a family by connecting single units together, depending on the number of persons living in it. Each capsule is preassembled with inbuilt kitchen spaces, complete with a sink, compact refrigerator and pantry cupboards. It also has a convertible bed, which can be used as a seating space when not in use for sleeping. And not just that; each capsule, out of the total 140 in the tower, is complete with home and kitchen appliances, including a television set, a telephone, audio system and an alarm clock. The minimalistic interiors have foldable cupboards that can be used as writing spaces or headboards or can be kept closed when not in use. 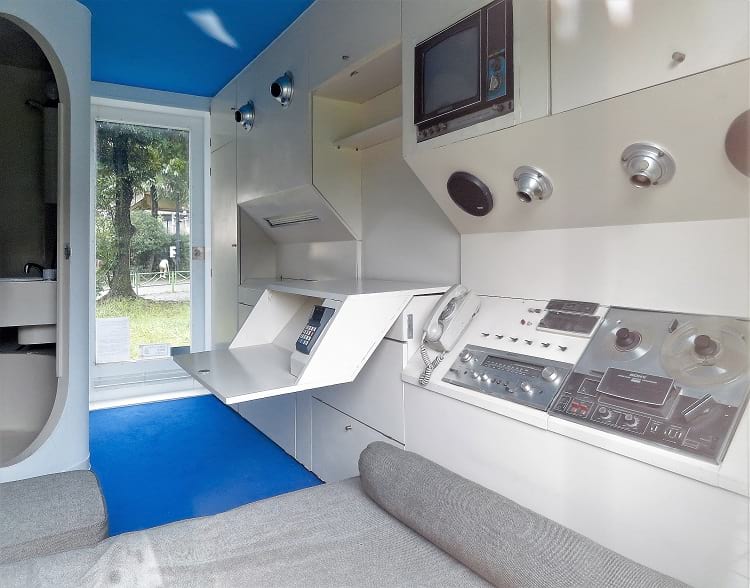 Inside a capsule of Nakagin Capsule Tower. (Ken OHYAMA / Flickr)

A single unit measures 8.2 feet by 13.1 feet and has a single circular window, measuring approximately 1.5 metres in diameter. The welded, light-weight concrete boxes also have a separate toilet unit attached inside, the size of an airplane lavatory, which has a bath tub, a commode and a sink. Appearing as cubes neatly and tightly stacked inside a frame, this unique structure was completed in a short span of only thirty days. Interior of a room inside the Nakagin Capsule Tower. (Chris 73 / Wikimedia Commons)

A masterpiece of metabolist architecture

Developed in Japan in the 1960s post World War II, metabolism architecture followed the principle of cells in the body or DNA strands, which make up an entire organism. The new concept of adaptability sprung up as a result of changing lifestyles post the war and need for more and more spaces to build homes. As a result of these, modular megastructures started coming up, where a single unit could be added to or removed from the main building framework as per the requirement. The social experiment quickly started picking up the pace as designers and architects began focusing on flexible, futuristic pods in place of urban living spaces. The Japanese were the first to build such compact homes and particularly Kisho Kurokawa’s Nakagin Capsule Tower came to be known as the first ever in the world to follow the capsule-like metabolist architecture.

Although the chief designer and architect Kurosawa claimed that a pre-assembled single unit was flexible and could be detached and attached to the main framework when necessary, it was not practically possible. Adding on to the already stacked pile and removing cubicles from it was an expensive task and involved a lot of money. Since the capsules were very small, permanent occupants with families even complained that it felt cramped inside and the feeling of novelty had begun to wane off quickly. Concrete had started to fall off and drainage became a constant issue with the residents in the tower.

Although the world-renowned architect Kisho Kurokawa hoped his pet project – the Nakagin Capsule Tower – would herald a new era in the field of permanent, futuristic residency, the tower fell into disrepair after its founding father passed away in 2007. Maintenance costs didn’t come by easily as no developer came forward for its renovation purpose. The structure slowly began to go from bad to worse as concrete crumbled and pipes began leaking, causing drainage issues. The few handfuls of residents that had occupied the capsules in the Nakagin Tower called for its demolition after Kurokawa’s death, with a plan to build a new conventional-styled apartment in its place. 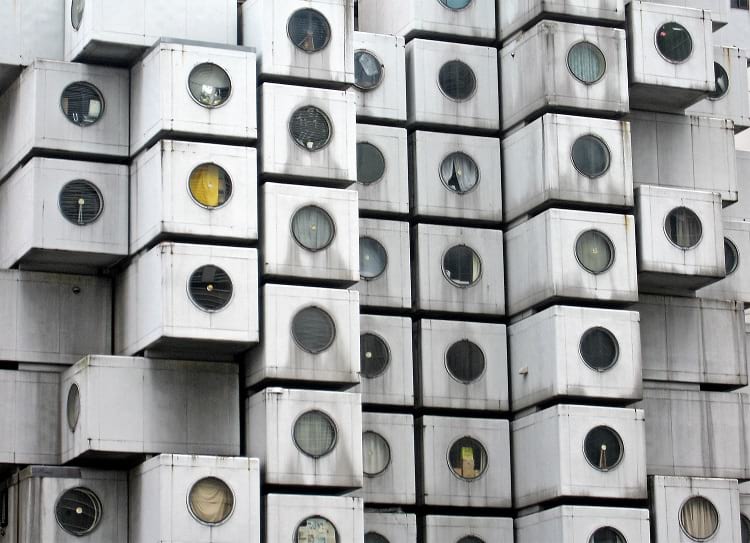 But the plan thankfully never materialized as the world economy crashed in 2008, serving as a temporary relief to Nakagin Capsule Tower’s legacy. While some residents moved out to better places, some still use it as rooms for office spaces, mostly to store their possessions. The abandoned and deteriorating building only has as many as thirty residents left in the tower that now look forward to preserving one of the rarest Japanese heritages. The upcoming Summer Olympics, set to be held in Japan in the year 2020, has given these residents and countless other Japanese people some hope of seeing the world’s first ever advanced living structure on the road to revival.

Although it is unsure yet whether The Nakagin Capsule Tower will live in the future to tell its tale; but one thing is for certain that Japanese were the first to materialize the idea of floating cities, where an entire world fitted into tiny spaces.

Enjoyed this article? Also, check out “DC Towers: The Project That Revolutionised the Cityscape Of Vienna“.

Previous Article
CSCL Globe: The Largest Container Vessel in the World, Until MSC Oscar Usurped its Ranking
Next Article
Green Boots: Dead Climbers Not Brought Back from Mount Everest Now Serve as Milestones