DC Towers: The Project That Revolutionised the Cityscape Of Vienna On an erstwhile municipal garbage dump within Donau-City in Vienna, the UNO-City was built with plans to host the Vienna-Budapest Expo (1995). However, this idea was soon abandoned. Architects Krischanitz and Neumann were commissioned, in 1922, to create an urban design master-plan for this vast area practically lying waste. The DC Towers (or Donau-City Towers) are two high-rise towers, designed by Dominique Perrault Architecture, which represents the last phase of this developmental plan. The entire district is now thoroughly urbanized and functional. The DC Towers serve as the entry gate to Donau City, Vienna.

The vision behind the Towers was that of a gargantuan monolith split into two uneven halves. The space between would create an arch that leads out to the rest of the district with its undulating modern facades. The Towers are mounted on platforms and slightly slant in towards the river and open up towards the city. The first of the two towers has already been constructed. Its unique undulating façade not only acts as a gateway into a modern townscape but has also become a prominent point-of-interest in the city’s skyline.

DC Tower 1 is one of the most prominent landmarks in Donau-City, Vienna, if not in all of Austria. This skyscraper is in itself almost like a functional district, mounted on a platform. The Tower houses offices, apartments, a four-star hotel, restaurants, a sky bar, and a fitness centre. There is also an open space for the public at the base of the tower. The Tower’s undulating façade provides an interesting contrast to the stoic and rigid architecture surrounding it. The folds make the Tower seem fluid and almost malleable. The façade is vested with a unique personality which moulds itself to the changing lights or events. Its steel and glass build again adds a unique texture to the otherwise ‘fluid’ visuals of the DC Tower 1. 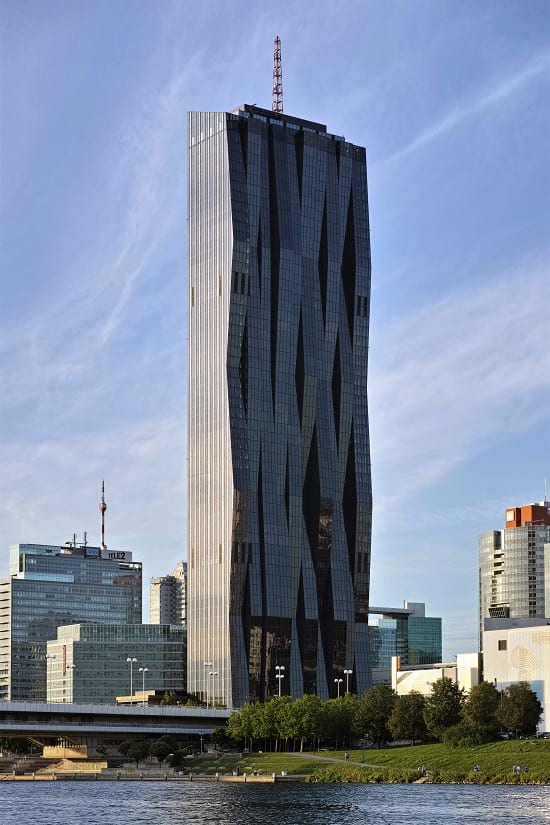 As the associate designer, Gaëlle Lauriot-Prévost, says, the DC Towers are very much tangible and present. The structures are not meant to be hidden or tucked away amidst the urban jungle. It draws the eye and engages the viewer in all its sensual appeal. The exposed concrete framework, stone and metal of the lobbies- all of it reinforces the physicality of the DC Towers.

The spread of the Donau-City is lateral, as is the horizontal nature of the public space under DC Tower 1. The goal of the designers was to amalgamate this quality of its surroundings with the vertical trajectories of the building itself. The façade to the back has achieved this by making the public space rise. Via a series of ‘steps’ from the surrounding esplanade, the public ‘square’ is extended to the platform on which the Tower stands. Evidently, the designers have taken immense care to ensure the structure of the Tower extends seamlessly into its surroundings and is accessible to all.

The other three facades have incorporated 54 metallic umbrellas that rise gradually from the ground. This is aesthetically significant, bringing in a certain softness and element of movement to the structure- tying it together with the cityscape of Vienna. The entire master-plan regarding the area spans decades, and its execution is not even near complete. As a result, there might be further additions to the facade that ties in elements from the neighbouring river bank and urban landscape. 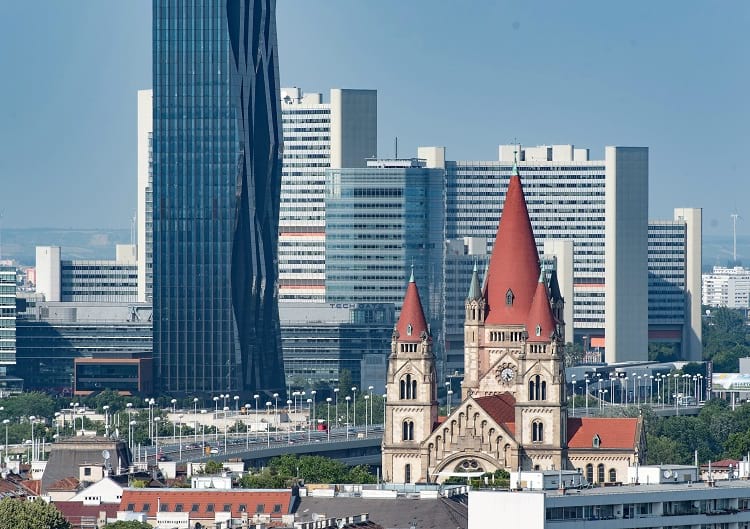 The ecological footprint of the Towers is minimal, and it was designed with a variety of eco-friendly measures in place. The office spaces housed within DC Tower have curtain walls made up of three layers of glass to protect against the sun. Openings to provide fresh air and plenty of ventilation are also present. Active floors reducing the volume of air flow to exactly match the thermodynamic heat load are also generously present throughout the building. These help in reducing the overall energy consumption. Recycled water from the Danube River is used for the cooling process involved.

The connected building at the bottom of the Tower has photovoltaic roofing and thermal barrier coatings (TBCs) to insulate it from sustained heat loads. All materials used are thermally insulating and can endure the massive difference in the temperature between the TBC surfaces and the load-bearing alloys. Large square screens, acting as sun-shades, have been provided for passersby to rest. The screen is made of black panels that are perforated and can be put to use as a windbreaker as well. The lower level of the square also has some ancillary umbrellas that can support planting in the future. Plans to include an automatic watering system are also under works. 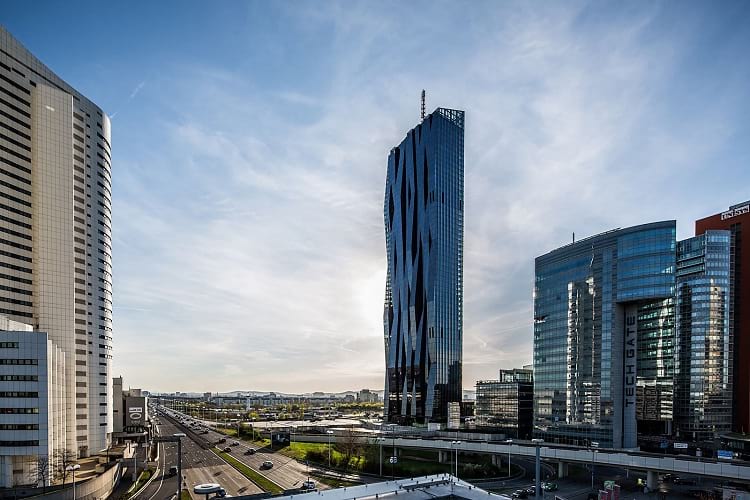 DC Tower 2 and the impact of the DC Towers project

The first of the two DC Towers, already up and running, has ushered in an era of rapid urbanisation in the city of Vienna. The controlled but sustained development of high-rises and city-planning has resulted in modernising the city. Mixed-use buildings that are economical and contemporary, and high-energy performance and eco-friendly at the same time, have become the norm. DC Tower 2 is still on paper, but we can imagine how it may further influence the urban lifestyle and metropolitan business of Donau-City, Vienna.

Fact Analysis:STSTW Media strives to deliver accurate information through careful research. However, things can go wrong. If you find the above article inaccurate or biased, please let us know at [email protected]

Previous Article
Ayahs’ Home In London: Where Abandoned Indian Nannies Were Sent to Live Out the Rest of Their Days
Next Article
Raëlism: The UFO Religion That Believes in Extra-Terrestrial Beings Called Elohim