Amazon Spheres: An Unexpected Rainforest in the Amazon HQ at Seattle 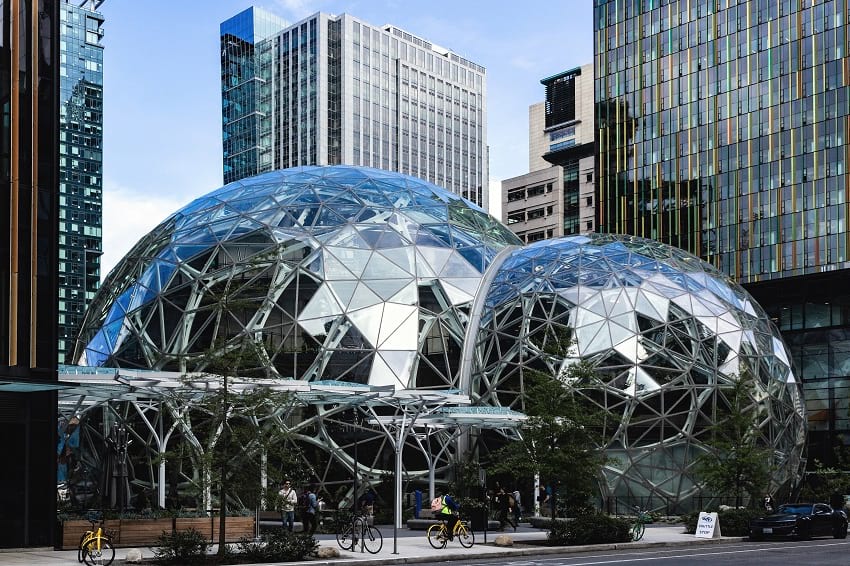 The exterior of the Amazon Spheres. (Biodin / Wikimedia Commons)

Located on 2111 7th Avenue, in Seattle, Washington are the Amazon Spheres- three spherical orbs that form a part of the Amazon headquarters campus. The Amazon Spheres are an architectural marvel, containing a makeshift replica of the Amazon rainforests with over 40,000 plants, right within a bustling metropolitan. 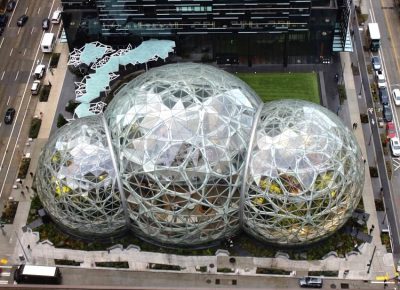 Amazon.com, Inc. is an American multinational company having global offices in more than 30 countries. It is an e-commerce platform that also deals with artificial intelligence, cloud computing, and digital streaming. It is among one of the Big Four technology companies, a prestigious list which also features Apple, Facebook and Google.

The Amazon Spheres were designed by Naramore, Bain, Brady & Johanson or NBBJ, along with the landscape firm Site Workshop, and the structural engineering firm Magnusson Klemencic Associates. Amazon employees have exclusive access to the spheres as their workspace, but weekly tours enable the public to access the Spheres as well as an exhibit situated on the ground floor.

Construction of the Amazon Spheres: Blueprint to the architectural marvel

Early in 2010, Amazon began to develop their headquarters campus, for which they required a rather large space. They acquired three blocks in the Denny Triangle area in 2012 and started to work on the design. The initial idea was of a six-storey building having a multi-purpose workspace as well as a conference centre. However, this plan was abandoned, and the design was later remodelled to include the spherical conservatory and an artificial rainforest we see today.

In May 2013, the new design for the Amazon HQ was produced, which was being developed by the NBBJ since 2012. This design invoked a mixed reaction from the project design review board of the city, which deemed the project to be “bold”. However, there were several concerns voiced by them regarding access to the public, the lack of cover for protection in case of rain, as well as the tremendous amount of energy that would be required in order to acclimatize the vast area.

The Amazon Spheres incorporated glass “Catalan spheres”, an intricate geometric form, to cocoon the organic forms. This high state-of-the-art design was introduced by NBBJ in August to replace the previously installed steel structures. Approval for this remodelling only arrived in October 2013, from the city’s design review board after some minor changes suggested by the board were made to the understructure. The foundation for constructing the Spheres was laid in 2015 and the initial pieces of the Amazonian Spheres, which were made of steel, began taking shape by February 2016. White paint was chosen to be the primary colour on the steel. Later in April, glass panels were placed on top of the steel structures. An Australian tree fern located in the Redmond greenhouse was the first plant that was relocated and planted in the Sphere, in May 2017.

Design of the Spheres

The panels of the three glass orbs are pentagonal hexecontahedron in shape. Interestingly, these panels seem to intersect each other. The resulting form is known as a ‘Catalan sphere’, which is a complex Archimedean solid. The amount of glass and steel used in the structure is nothing short of extraordinary, measuring up to a whopping 2643 panes of glass and 620 short tonnes of steel. This architectural marvel occupies a space equivalent to half a city block, and stands tall with the height of each sphere varying from 80 to 95 ft.

These orbs serve the dual purpose of being a workspace, as well as a relaxation centre in the form of an employee lounge. Varying from three to four storeys in height, the three glass orbs contain at least 40,000 plants, a meeting space, and also surprisingly accommodate retail stores. Located under the Day 1 building on Lenora Street, the headquarters campus of Amazon is a sight to behold. 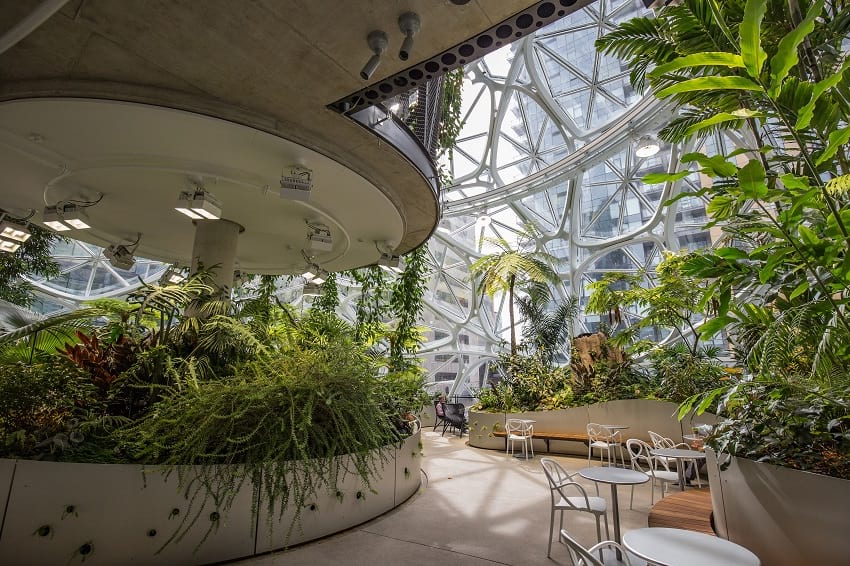 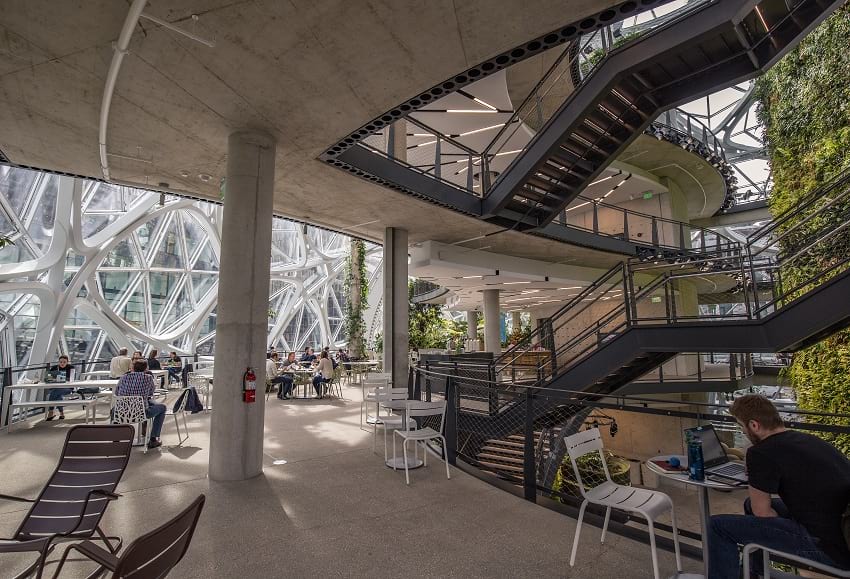 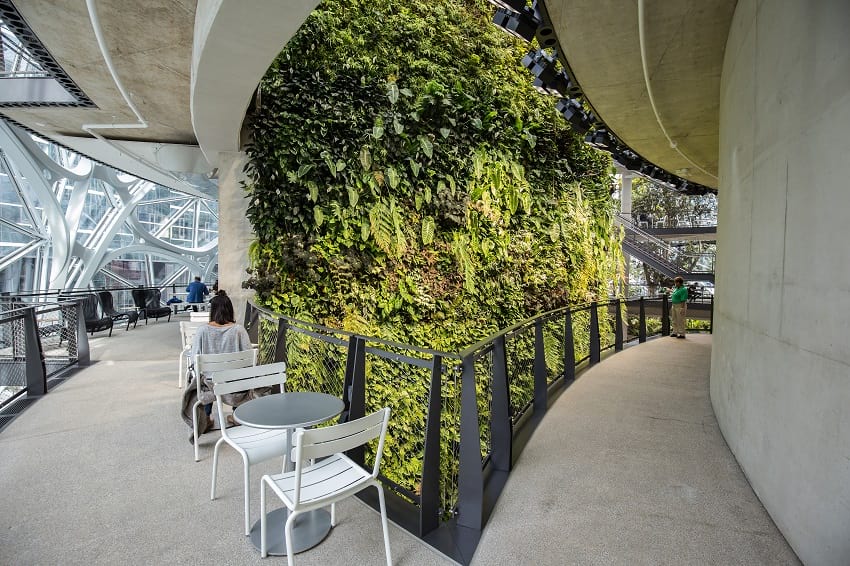 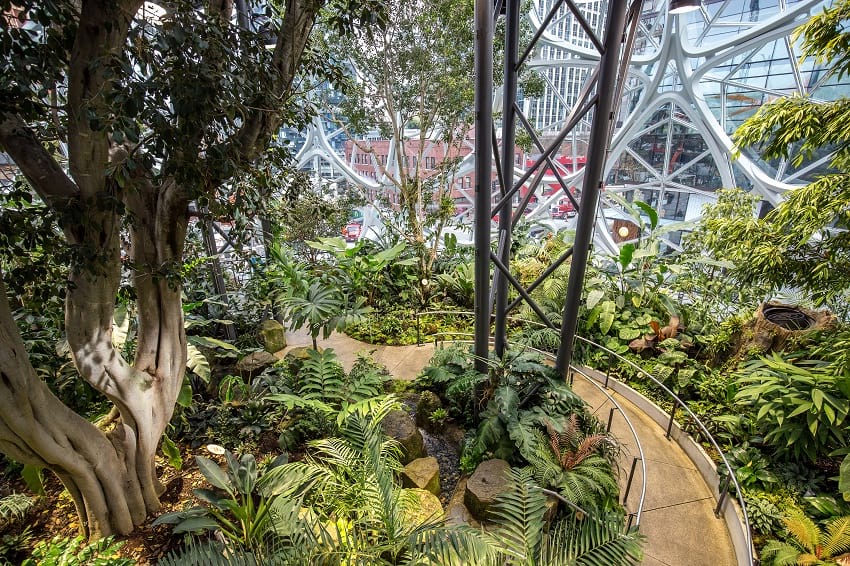 The sphere occupying the majority of the space is located in the very centre. It also boasts of a stairwell shaft wrapped in a “living wall” with 25,000 plants, which also consists of carnivorous species belonging to Asia. The basic facilities like a cafeteria, stairways, elevators, bathrooms, meeting spaces, tables and benches, are all incorporated into the design seamlessly. These meeting spaces, tables and benches can accommodate an astonishing number of 800 people in total. 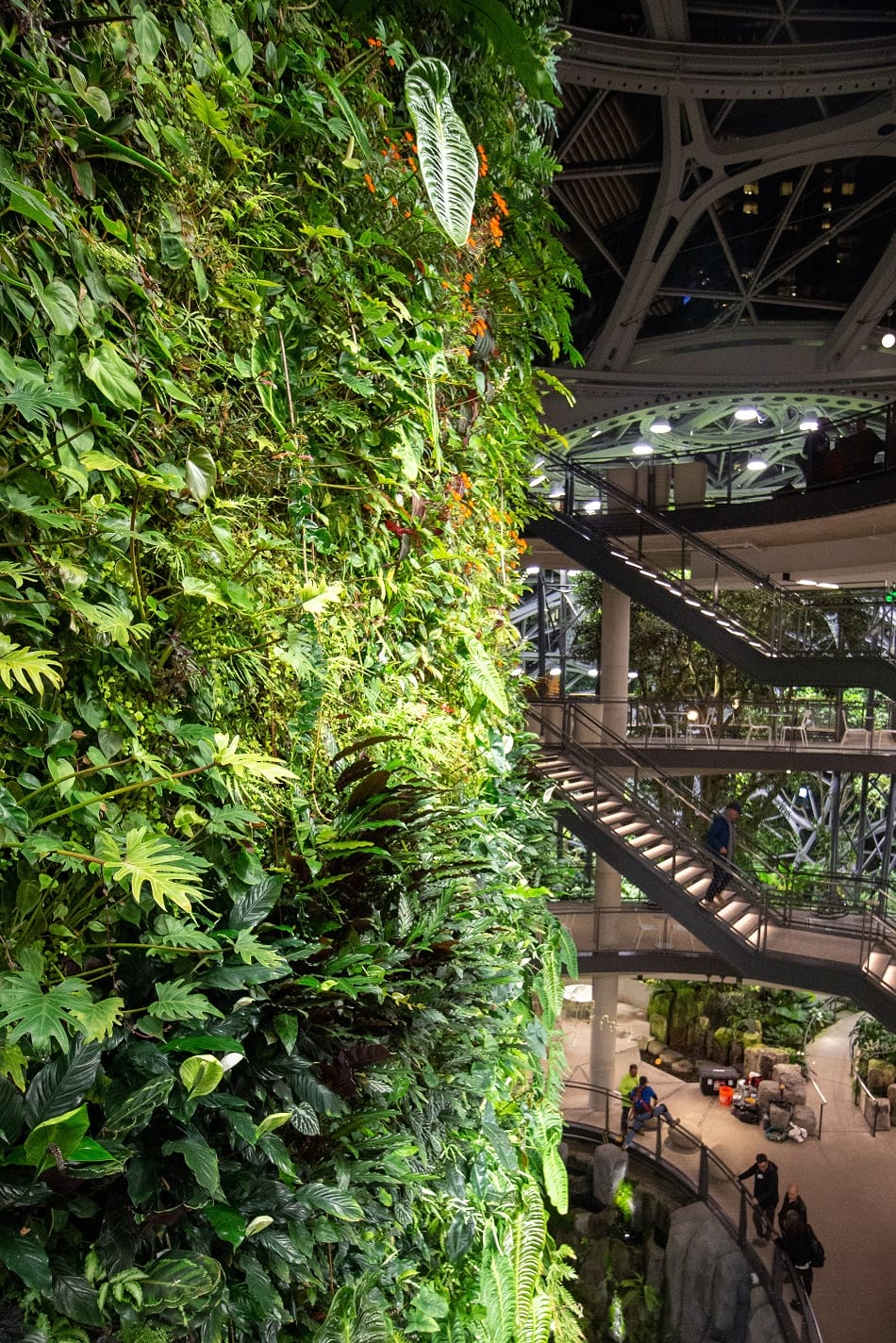 Flora and Fauna within the Amazon Spheres

There is a unique assortment of plants from various countries of the world housed within the Amazon Spheres. The western and eastern orbs are divided into an Old World garden and New World garden, respectively. The Old World garden is located near the Sixth Avenue entrance to the Spheres and is a hub for African and South-east Asian species. On the other hand, the New World garden on Seventh Avenue houses species native to Central and Southern America, and Australia. A full time horticulturalist was employed to maintain the plants over tenure of three years at a greenhouse in Redmond. The orbs maintain a temperature of 72 degrees Fahrenheit and 60% humidity. 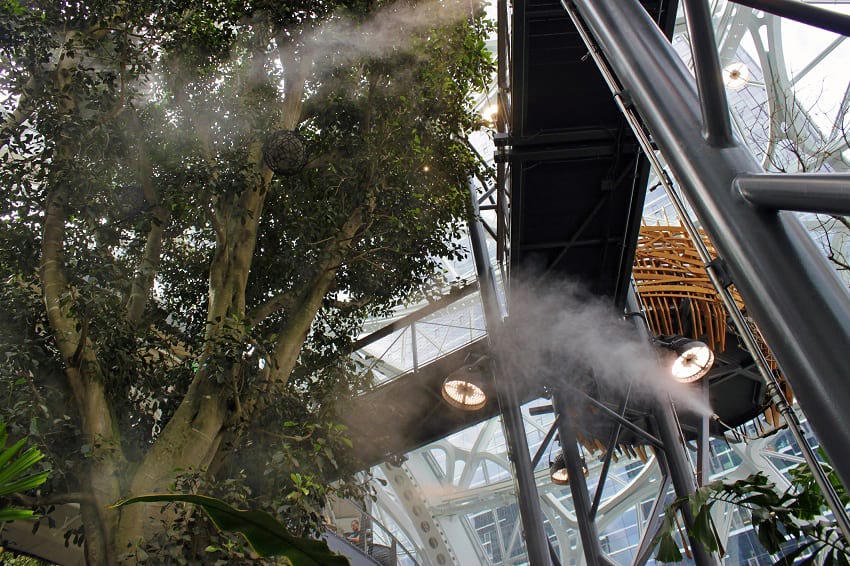 The largest inhabitant in the sphere Ficus Rubiginosa being watered by a gentle mist. (SounderBruce / Flickr)

On June 17, the largest tree, a Ficus rubiginosa nicknamed “Rubi”, was placed inside the Spheres with the help of a crane. There is a wooden seating area next to Rubi, which resembles a “bird’s nest” and is placed at the edge of a sort of suspension bridge. One of the two corpse flower at Amazon Spheres. (hypothetical_E / Flickr)

Corpse flowers, the largest and smelliest flowers in the world, are extremely rare and bloom only once in 7 years. The Amazon Spheres facility boasts of housing two bloomed Corpse flowers- ‘Morticia’ in October 2018 and ‘Bellatrix’ in June 2019. Considering these flowers stay in bloom for only 48 hours and can measure up to the staggering height of 9 feet, it is but natural that they attracted a huge crowd.

Other plants that are found within the spheres include the staghorn fern, Begonia sizemoreae, Passiflora antioquiensis, peacock plant, and the Coelogyne speciosa (a species of orchid native to Malaysia). Bright coloured flowers line the pathways through the Spheres, and quite often the plants are sprayed with a gentle stream of water.

A lot of thought has gone into creating this remarkable space, there are also several paludariums and terrariums scattered throughout the Spheres. These modified aquariums have both terrestrial as well as aquatic plants and specimens along with several types of fish.

In order to establish a proper conservatory-esque environment, beneficial insects are released inside the Spheres to prevent any bad bugs like aphids from existing. This is absolutely necessary as they cannot spray pesticides around people who work or visit the Spheres.

These magnificent orbs, also popularly known as “Bezo’s Balls” have often been compared to the Space Needle- built in 1962 for the Century 21 Exposition. According to initial reports, it was supposed that Amazon had spent an estimated USD 4 Billion on the Amazon Spheres project. Amazon later disclosed that the whopping sum was used for the design and construction of the entire Seattle HQ campus, and not just the Spheres. However, Amazon desisted from disclosing the actual figures. The total cost of the improvements made on the block, based on current estimates, measure to around 284 Million USD.

Today, Bezos’ Balls or the Amazon Spheres have become a well-known milestone, as well as a popular spot for tourists in the Denny Triangle area of Seattle. Jeff Bezos, the CEO of Amazon, inaugurated the complex structure officially using an Alexa voice command. The dedication for the Spheres was made on 29th January 2018, by Jeff Bezos, Mayor Jenny Durkan, County Executive Dow Constantine and Governor Jay Inslee. The facility opened to the employees of Amazon the very next day, alongside a public exhibit called the “Understory” that is situated below the Spheres.

The Amazon headquarters opens its doors to the public once a week, providing them with guided tours and the campus also holds a weekend reservation program that only happens twice in a month. This enables the common people to update themselves with new astounding technology, as well as experience the insides of an architectural marvel such as the Amazon Spheres.

Special thanks to Ashlyn Gehrett for releasing the photos of the Sphere in creative commons.