Lithopedion: The Extremely Rare Medical Condition of Having a ‘Stone Baby’ 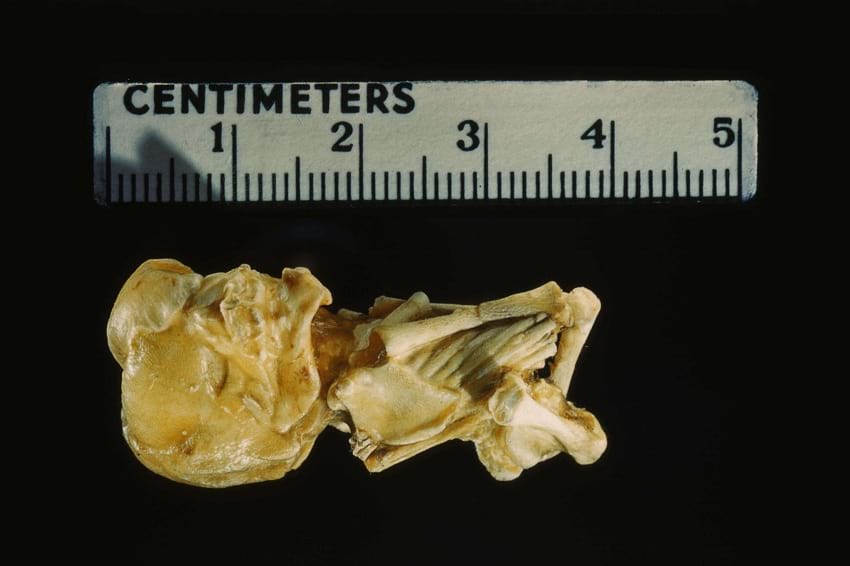 A lithopedion is an extremely rare medical phenomenon which occurs when a foetus dies during an abdominal or ectopic pregnancy. At this stage, the deceased foetus is very large and cannot be reabsorbed by the mother’s body. The mother’s immune system immediately calcifies the foetus on the outside, as part of a foreign object granuloma. The granuloma prevents infection by shielding the mother’s body from the dead tissue of the deceased foetus. The word “lithopedion” comes from the Greek words Lithos (stone) and Pedios (child). The medical condition accompanying the phenomenon is called lithopedia.

Lithopedia generally occurs in the time period between 14 weeks to a pregnancy that has been carried for a full term. It is not uncommon for lithopedion occurrences to remain undiagnosed and undiscovered for very long periods of time – even decades. A lot of the women who were found to be carrying lithopedions had already gone through menopause at the time. The process of detection of a lithopedion is an invasive one – requiring an intensive and thorough X-Ray Analysis. According to one reputed medical report, there have only been 300 known cases of a lithopedion in the world, recorded over 400 years of written medical history. The chance of an abdominal pregnancy is 1 in 11,000 pregnancies. Of these abdominal pregnancies, the probability of a lithopedion is 1.5%. Interestingly, many women carrying a lithopedion have had several successful pregnancies without any complications at all. A calcified fetus. (National Museum of Health and Medicine / Flickr)

The oldest known lithopedion remains was found at an archaeological dig at Bering Sinkhole in Kerr County, Texas. Carbon dating revealed it to date as far back as 1100 BC. Another stone baby was discovered at a Gallo-Roman excavation site in Costebelle, South France. This specimen dated back to the 4th century.

Abu al-Qasim, a Spanish Muslim physician, described the medical condition of lithopedia for the first time in his 10th century medical treatise. In the 18th century Europe, physicians had discovered and documented many instances of lithopedia in sheep and hares. The French surgeon Sauveur Francois Morand described lithopedia to the French Royal Academy of Sciences in 1948. He used lithopedia to demonstrate the similarity in the process of foetal development in all viviparous organisms. The prevention of lithopedia was an argument in favour of the newly discovered medical procedure of caesarean section or c-section.

An ectopic pregnancy is a rare complication during pregnancy during which the fertilised egg does not implant inside the uterus and instead does so in the abdominal cavity. Quite naturally, the fertilised egg cannot survive outside the uterus. If allowed to grow, it can cause serious damage to the mother’s health by damaging nearby organs and causing blood loss. In very rare cases, ectopic pregnancies result in the formation of lithopedions. The mother’s immune system treats the baby as a foreign object and attacks it, encasing it in a calciferous substance.

Notable Reported Cases of a Lithopedion

The first recorded lithopedion was described by the Spanish Muslim physician Abulcasis who lived in Cordova, the capital city of the Umayyad Caliphate in Spain. The exact date of the pregnancy is unknown, however, Abulcasis made his diagnosis in the late 10th century. The patient was pregnant on two separate occasions but she never gave birth. After a significant amount of time, she developed a large swelling in her navel area which turned into a suppurating wound that would not heal. The bleeding and suppuration continued until Abulcasis surgically removed several foetal bones from the mother’s body. The patient recovered even though the suppuration would not cease.

One of the most well-known cases of a lithopedion originates from France in the 16th century. In 1554, Madame Colombe Charti became pregnant for the first time at forty years of age. She went into labour and her contractions stopped, but the baby was never born. Madame Charti lay in bed for the next 3 years recovering from her painful and tiring pregnancy. After she passed away 28 years later, her husband enlisted the services of two surgeons to conduct an autopsy so that he could find out the truth. The physicians discovered a completely formed baby girl. The foetus had grown very advanced as the physicians discovered evidence of hair and even a single tooth. By 1653, this lithopedion was in the possession of King Frederick III of Denmark who allowed the scientist Thomas Bartholin to look at it, but not examine it further.

One of the most controversial and well-documented cases of a lithopedion dates back to 1653 in Toulouse, France. Marguerite Mathieu, from the village of Viulas, had given birth to ten children but only three had survived infancy. At the age of 37, she became pregnant again and carried the baby to a full-term and broke her water. However, she never gave birth despite the best efforts of the attending physicians. She suffered from abdominal pain all her life and could only be somewhat comfortable while she was lying down, making her practically bedridden. Her case became very notorious and controversial and people said that her symptoms were due to a spell cast by a rejected midwife who was a witch. After her death, her family conducted an autopsy. The autopsy was conducted by four doctors and three surgeons and it took three days. They found a calcified umbilical cord, a placenta and a fully formed baby boy that almost weighed 4 kilograms. This lithopedion was extensively studied and described by one of the attending doctors, Francois Boyle.

A lithopedion is one of the most wondrous and fascinating medical phenomena. The human body is fascinating and its resilience and adaptability still manage to surprise doctors and researchers who have spent their whole lives studying it. To protect itself from a foreign object competing for resources, the mother’s body takes the necessary steps to protect itself. This eventually results in a petrified stone baby or a lithopedion.

Enjoyed this article? Also, check out “The ‘Immortal’ cells of Henrietta Lacks that Revolutionised Medical Research“.

Previous Article
Margaret Howe Lovatt: Strange Case of a Male Dolphin Falling in Love with a Young Lady
Next Article
Incredible Snake Island: One of the Most Uninhabitable Places in the World