Assateague Island and Its Feral Horses The horse is man’s second best friend after the dog. Its majestic looks, heady smell, terrific speed and amazing stamina are matchless. The scale ‘Horse Power’ testifies to the iconic status it holds as a power parameter. Its resilience too is mind-boggling. It can revert back to its pristine wild form (which existed before its domestication in 3000 BC), to become ‘feral’, if driven out from human care.

That’s what happened in the late 17th century. The increasing tax burden on domestic animals forced farmers to abandon their horses. Equine herds were driven to Assateague, a 60 km long barrier island, to live free.

Another view is that a Spanish ship ferrying a herd of horses wrecked at high sea. The horses which swam to safety became the ‘feral’ horses of Assateague Island. 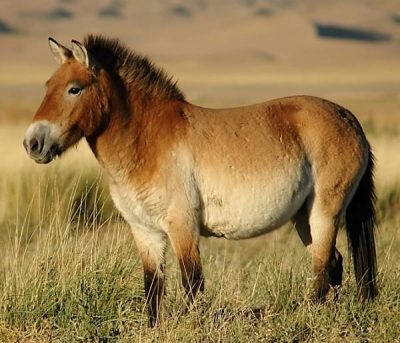 It is important to note that ‘wild horse‘ is not the same as ‘feral horse’. There is only one truly wild horse in the world at present, it is Przewalski’s horse but recent research has suggested that they too might have been descended from domesticated horses. The rest of the so-called wild, are actually feral horses. Any domestic animal becomes feral when it lives freely in the wild away from the care and protection of human masters. Feral horses are a genre that was ‘pet’ in the past but became wild in the face of harsh circumstances. Interestingly, given a chance, they can switch to domestic use all over again.

The feral horses of Assateague island are divided into two major groups. One, living on the Maryland side of the island, another on the Virginia side. Maryland herd is monitored by The National Park Services. The herd on the Virginia side is owned and cared for by the Chincoteague Volunteer Fire Department (hence the name Chincoteague ponies for the Virginia herd) who have a grazing permit to keep the horses on the Chincoteague National Wildlife Refuge. While the Refuge and The National Park Services may respond to an emergency in the first place, the call is finally taken by the Chincoteague Volunteer Fire Department. A major tourist attraction, the island is just 3 hour’s drive from Washington DC. It can also be reached from Baltimore, Annapolis, Southern Delaware and Northern Virginia. Its natural beauty, flora and fauna gives the island a place of pride in National Treasures of the United States.

Where wild horses are a treat to watch, tourists are warned to remain at a safe distance. Touching or patting them may provoke them to bite or kick in self-defence. Even feeding the animals is prohibited as human food can make them sick. Hierarchized into groups of two to twelve individuals, called the band, Assateague’s horses roam free eating salty marsh grass that grows on the island. Their big belly and short stature is an adaptation to the retro environment. Ingestion of salty grass compels them to drink more water, hence the huge belly. The harsh environment of the island makes them petite like their distant ancestors. Clearly, a case of devolution, of reverting back in lineage – to their pristine wild forms. Yet, they have the wherewithal to become man’s companion once again, in changed circumstances. To keep their population in check, horses are sold off to private owners. ‘Misty of Chincoteague’, the children’s novel written by Marguerite Henry, describes a local festival called ‘Pony Penning’ wherein young foals of Virginia herd are sold by auction. Feral horses grazing near the shore of the island. (Bonnie U. Gruenberg / Wikimedia Commons)

Horse population is regulated by the state

Resilient as these robust creatures are, they once again adapt to man’s proximity, when put into urbane conditions. Males are allowed only one breeding; then they are sterilized. This is done to avoid inbreeding and ensure diversity in future generations. The state monitoring restricts the size of the herd to 150 adults so that the natural resources of the island are not threatened. Wild must necessarily be hard on weak and the ailing. So, care is taken not to interfere with nature’s edict of the survival of the fittest. Only token veterinary aid/intervention is provided, like euthanasia for the terminally ill. Sick and weak are allowed to perish so that only the fit survive to live and procreate. 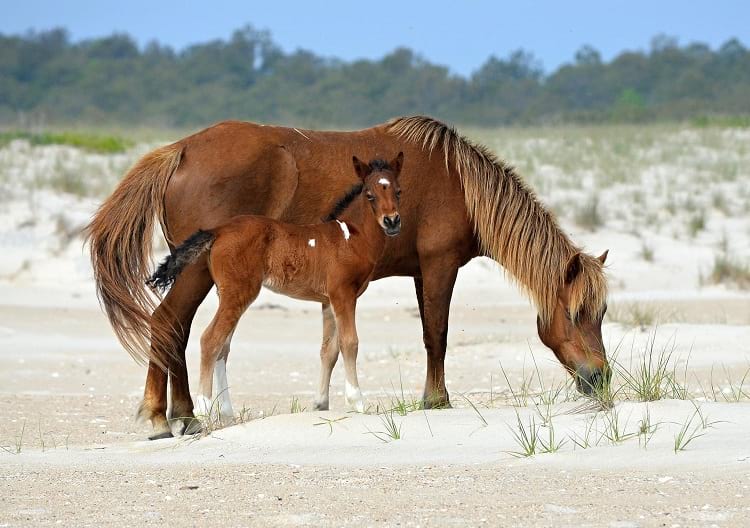 A mother horse with her foal grazing. (NPS photo)

The island is much more than just feral horses

On a positive note, horses are not the only attraction that the island offers to tourists. It is also an ideal destination for the bird watchers. Scenic beach, white sand, blue sea waves, safe campground are other bounties of tourist interest. Island’s neighbourhood offers good opportunities of the sighting of wildlife as well.