The Lonar Lake: An Astronomical Marvel 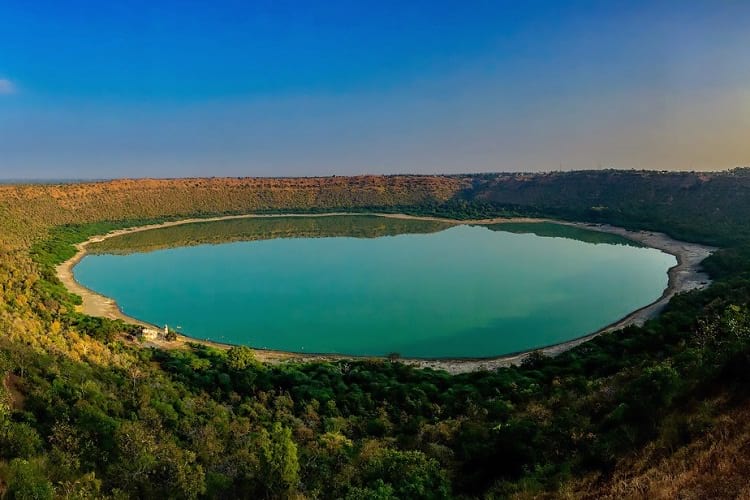 Located in Maharashtra’s Buldhana district at Lonar, is a “saline, soda lake”- the Lonar Lake. It is said to have been created during the Pleistocene Epoch due to the impact of a meteor. It happens to be a hypervelocity impact crater, consisting of basaltic rock on Earth. There are three other known basaltic impact structures like the Lonar crater, which may be found in the south of Brazil.

An overview of the Lonar Sarovar Lake

The Lonar Crater is said to be fifty-two thousand years old. It was formed when a meteor weighing at least 2 million tonnes crashed into the earth at an approximate speed of 90,000 kmph. The crater is 1.8 km wide and 150 m deep. The water in the lake is saline, as well as alkaline and is surrounded by hills that have many fascinating temples. Despite the rarity of this lake, very few people have heard of Lonar Lake apart from the locals of the place and some trekkers.

The Lonar Lake contains various sodas and salts. In times of dry weather, evaporation decreases the level of the water and soda is collected in large quantities. There are two small streams, called “Purna” and “Penganga” that drain into the Lonar Lake. A well having fresh water is also located on the southern side, close to the edge of the water. 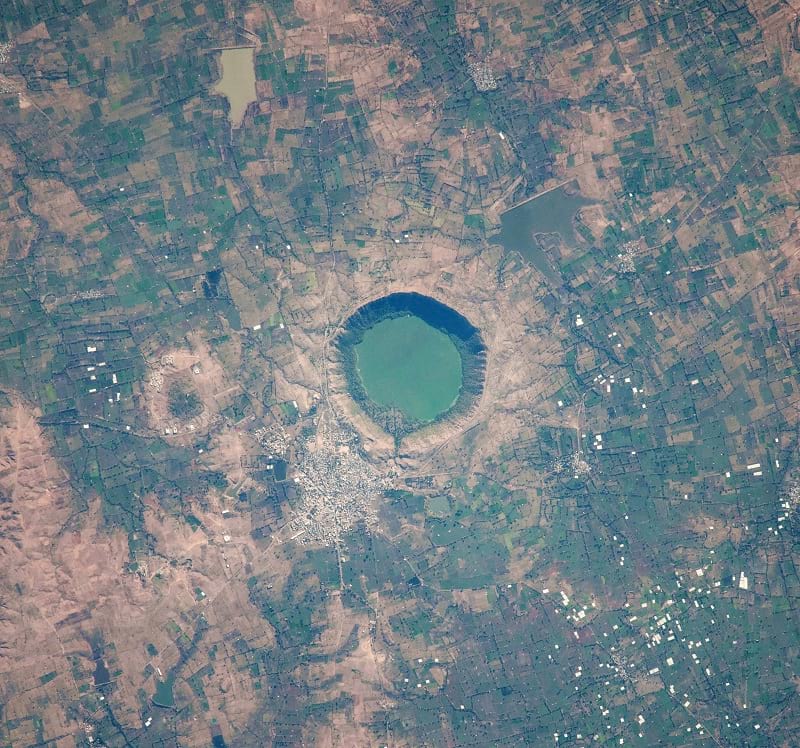 Home to diverse flora and fauna

The slopes of hills around the Lonar Lake are covered with trees. The savannah-like area houses teak, bastard teak, the Indian screw tree, and the Pala indigo (also known as dyer’s oleander). The surrounding shrub-savannah contains plants like the Egyptian acacia and Ziziphus spp. Along the shore of the lake, the “non-native Prosopis juliflora” can be seen growing. The alluvial terrace in the northeast along the Dhara River is used for agricultural purposes. Some of the main crops that are cultivated are maize, millet, okra banana, and papaya. Lonar Lake has two unmistakeably distinct regions that do not mix. The outer neutral region (pH level of 7) and the inner alkaline region (pH level of 11) each have its own flora and fauna. The lake serves as a haven for a diverse range of plant and animal life. Several resident and migratory birds are found on the lake. This includes the black-winged stilts, brahminy ducks, golden oriole, blue jays, red-wattled lapwings, hoopoes, tailorbirds, magpies and swallows among others.

Several reptiles like the monitor lizard, snakes, and scorpions are also found on the lake. The Lonar Lake is also home to several thousands of peafowls, chinkara, gazelles, langur, mongoose, barking deer and many insects and amphibians.

Lonar Lake has non-symbiotic bacteria that help in nitrogen fixation. Studies have shown microbes like Slackia sp., Actinopolyspora sp., Paracoccus sp., Klebsiella sp., and Halomonas sp. live only in alkaline conditions that have a pH level of 11.

There are several places around the Lonar Lake that are visited by tourists throughout the year. The Ajanta and Ellora Caves, for instance, are UNESCO World Heritage Sites. Daulatabad, Khuldabad (also known as the Valley of Saints), the very famous Grishneshwar Temple, and the Pitalkhora caves are other famous spots. However, not many people visit the Lake itself, because not many know about its existence. This beautiful lake is a four-hour drive from the city of Aurangabad. The road has picturesque villages and paddy fields that provide a refreshing change from the dull greyness of the city.

The trek to this marvellous lake is a bit tricky owing to the quicksand on the banks, and the path itself is rather slippery. On your way to the lake through the jungle, you may come across various types of minerals. You could stumble upon ruins of temples which are now home to insects and bats. The forest area near the Lonar Lake is a paradise for nature photographers and those who love birds and ardent bird-watchers. A temple at the banks of Lonar lake. (Rohanguj2 / Wikimedia Commons)

As mentioned earlier, there are a number of temples surrounding the lake, many of which are in ruins now. There is the Shankar Ganesha Temple which has a notable rectangular idol of Shiva. The Ram Gaya Temple and the Kamalja Devi Temple is full of life during Navratri.

There is a myth about the Dhara or Sita Nahani Temple, which is said to be the place where Sita is said to have bathed. There is nothing remarkable about the architecture, but there is a kund inside the temple. Into this, a perennial freshwater spring flows, that feeds the lake below.

A haven in danger

Unfortunately, this astronomical marvel is facing several environmental as well as anthropological problems that threaten its very existence. The lake’s underground water source has been disturbed by illegal excavation activities that are carried out. Tourist activities also cause severe damage to the surrounding land. The perennial streams, “Dhara” and “Sita Nahani”, are one of the sources of water for the lake. However, these streams are also used for bathing, washing cattle and clothes, and for other domestic uses by the local people, pilgrims and the tourists. The household wastes containing detergents are disposed into this lake.

The agricultural fields surrounding the lake use toxic materials like pesticides and fertilizers that pollute the lake water. The ecosystem of the Lonar Lake is getting damaged because of sewage being dumped into the waterbody. Commercial activities around the lake have also harmed the natural topography of the lake. The increasing pollution has greatly distressed the flora and fauna of the Lonar Sarovar.

Enjoyed this article? Also, check out “The Jewel of Manipur: The Loktak Lake is the Only Floating Lake in the World“.

Previous Article
Communism in Indonesia: The Destruction of the PKI
Next Article
The Philadelphia Experiment: When an American Navy ship Supposedly Teleported